Dallas County is about to be under a shelter-in-place order. The order will last at least until April 3. 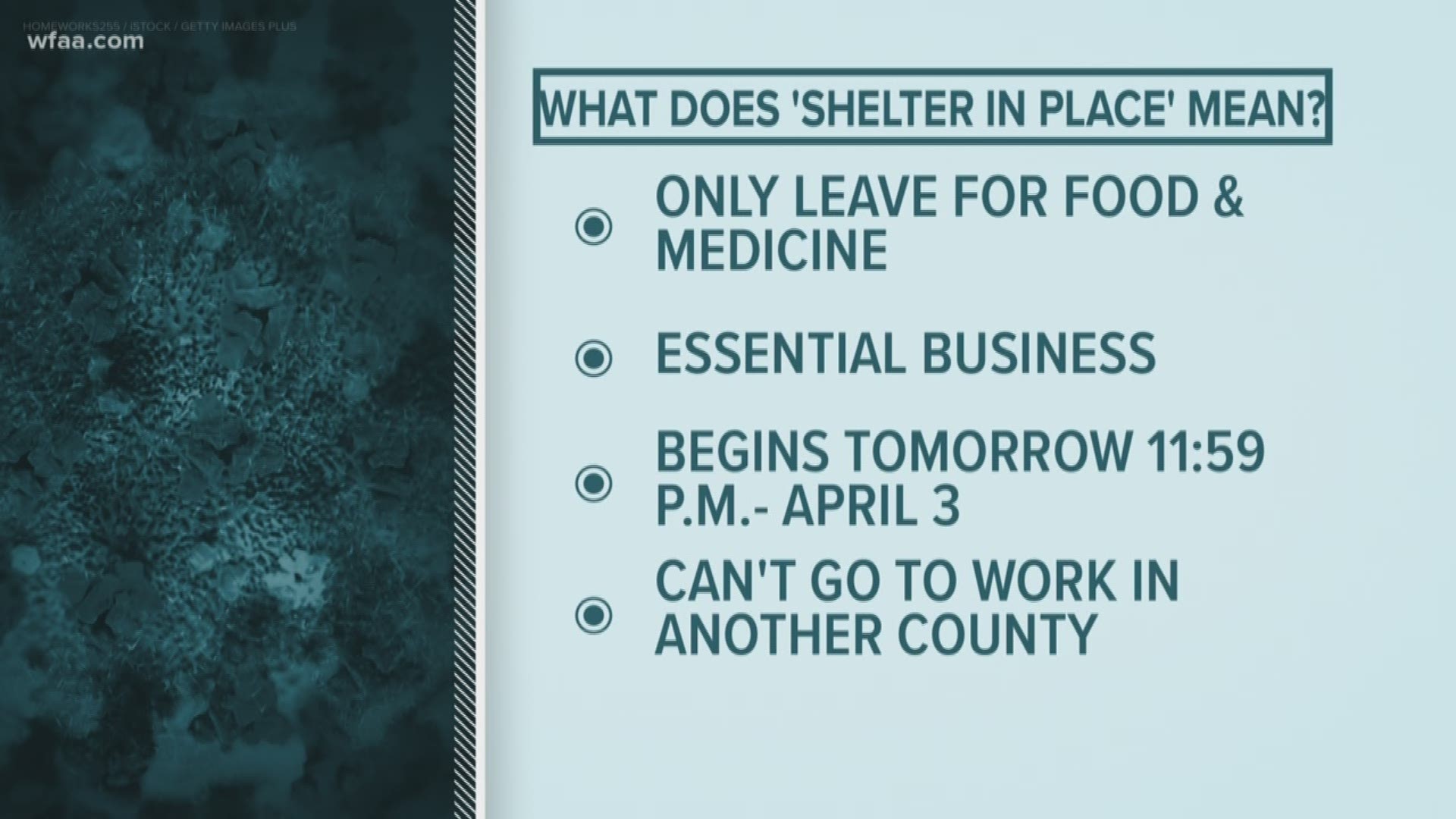 More than 200 positive cases of COVID-19 have been reported in North Texas, including six deaths. That number is expected to increase as new testing centers open to the public and more people are able to get tested.

A second drive-thru testing center opened on Sunday at the Ellis Davis Field House in Dallas to help meet the large demand for tests. The American Airlines Center is the first location to open in Dallas and began serving the public earlier last week.

Both testing centers will be open from 8 a.m. to 8 p.m. each day, but there are some requirements a person must meet before they can get tested.

In Fort Worth, Mayor Betsy Price said Monday that grocers are opening earlier for pregnant women, elderly people and those who are medically-compromised to shop.

Rowlett, which is located in both Dallas and Rockwall counties, has issued a shelter-in-place order, according to a news release. The order mirrors the one for Dallas County and affects everyone in the City of Rowlett, whether in Dallas or Rockwall County.

Dallas County Judge Clay Jenkins held a press conference Monday to further explain what is and isn't allowed under the new shelter-in-place rule that goes into effect Monday night at 11:59 p.m.

Under the rule, which hasn't changed since it was implemented Sunday, people are still allowed to do the following:

The following businesses/services will still be open:

As far as jobs outside of Dallas County, Jenkins said that you are not allowed to leave Dallas County for work and then return back home at night.

"If you live in Dallas County you are under this order. It's a safe at home order. So you can't get up from your house in Dallas and go to another county to work and come home at night. We are allowing people to move out of the county, but we suspect very soon the rest of the region will likely be doing the same thing we are doing, so that really won't make much difference."

Jenkins said anyone found in violation of the rule could be fined $1,000, and asked anyone who sees anyone violating the rule to call 311.

"We don't have enough manpower to follow you around and be the 'curfew nannies,' he said. "So we need everyone's help."

Jenkins was joined at the press conference by Dr. Philip Huang and Dr. Mark Casanova. Casanova told reporters that this order helps buy hospitals some time.

"If we change nothing, many hospitals run the risk of exhausting appropriate protective equipment by mid-April. So that's a short time frame."

The Fort Worth mayor said Monday that Albertsons and Tom Thumb will open early for seniors, pregnant women and anyone who's medically-compromised.

Those stores will be open from 7-9 a.m. for that group on Tuesdays and Thursdays.

Whole Foods will also be open earlier for that group from 7-8 a.m. daily.

Firefighters will also be there to help people with their groceries.

Testing sites in Dallas open to anyone with symptoms, city officials say

The two testing sites in Dallas have updated their criteria to lift restrictions on testing, according to city officials.

Now, anyone who is exhibiting the below symptoms of the disease can be tested at either site:

Those with symptoms who need to be tested can go to Parking Lot E of the American Airlines Center, located at 2500 Victory Plaza or to the Ellis Davis Field House, which is at 9191 S. Polk St.

The number of cases in Tarrant County increased by 10 from 47 on Sunday to 57 Monday, county health officials reported.

Of those 57, 54 are active cases, two people have recovered and one person who had the disease has died, according to health officials.

The death occurred in Arlington, where there are 12 active cases at this time.

One person in Benbrook has recovered, county health officials said. Someone in White Settlement is the other to have recovered since contracting the virus.

There are 18 active cases of the disease in Fort Worth and four in Mansfield and Southlake. There are three in Colleyville and two each in Euless, Haltom City, Keller, Lakeside and North Richland Hills. Grand Prairie, Grapevine and Watauga each have one case, according to the county.

Health officials across the country had widely cautioned that numbers will continue to increase as more testing becomes available.

Two men from Dallas who were in their 60s have died from COVID-19, Dallas County officials said. One did not have any other high-risk health conditions, while the other did, though his conditions were not specified.

Both had been critically ill at area hospitals.

That brings the total of deaths now to four people in Dallas County.

24 additional cases were also reported by county health officials, bringing the total of Dallas County residents infected to 155. At least four other people who were tested in the county but not residents were positive as well.

“My thoughts and prayers go out to the families of the two Dallas County residents who lost their lives to COVID-19 since yesterday’s posting," Dallas County Judge Clay Jenkins said in a news release. "The 'Stay Home Stay Safe' order will save lives but it takes all of us."

County Judge Pat Deen announced late Sunday that Parker County had confirmed its first case of the disease with the Texas Department of State Health Services.

Deen said no further information on the patient would be released, citing health confidentiality laws.

Domino’s announced Monday it is trying to fill 1,800 new team member positions at franchise locations across Dallas-Fort Worth.

The positions are at 180 stores throughout the area, meaning each store is hiring an average of 100 new employees such as delivery drivers, managers and customer service representatives.

Stores across this area are continuing to provide pizza to those who are looking for a delicious, hot meal, and at times like this, staffing is critical,” Don Garman, a Dallas-Fort Worth-area Domino’s franchise owner, said in a news release from the company.

“We want to make sure we’re not only providing food to people, but also delivering opportunity to those who are looking for work.”

CVS Health also announced Monday that it was looking to hire 50,000 additional employees across the country and awarding bonuses up to $500 for employees who have to continue to work at physical stores.

The company will also be working with other major corporations hit hard by the pandemic like Hilton and Marriott,t"o fill CVS positions with employees they have had to furlough due to the effects of the pandemic," according to the release.

Grocery stores across the metroplex have also been hiring thousands of new employees to keep up with newfound demand.

RELATED: There are daily shipments of water and toilet paper at D-FW Tom Thumbs, plus 4,000 jobs

Ninety-eight Dallas-Fort Worth area Tom Thumbs and Albertsons are hiring about 4,000 new workers to fill in-store employee and delivery driver roles. To apply, you can go in to any store and inquire or head online.