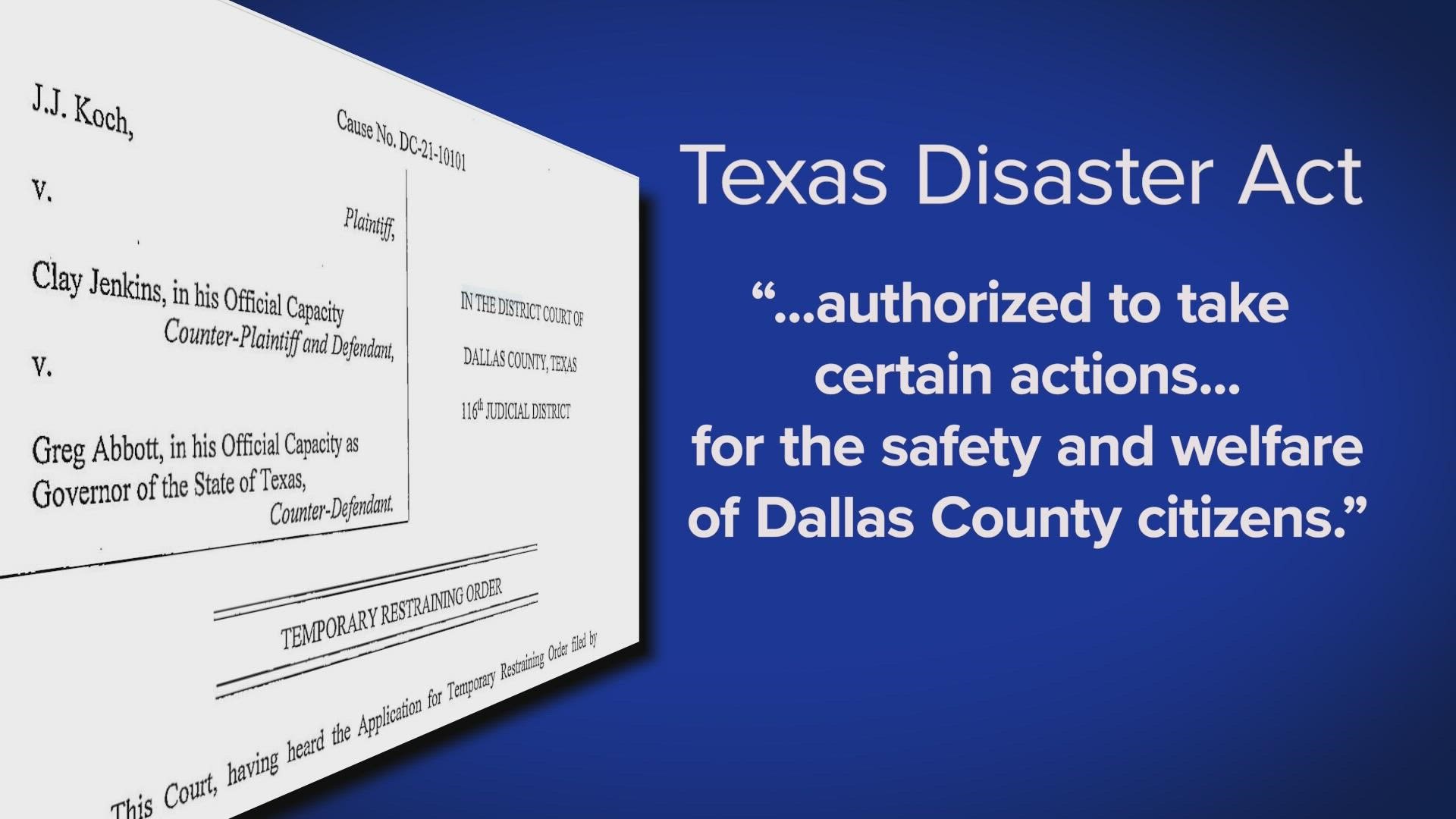 "This is all of us, we are all team public health, and the enemy is the virus. And right now the enemy is winning," he said.

Jenkins signed the new ordinance in a Wednesday afternoon news conference in defiance of Gov. Greg Abbott's statewide order barring mask orders. Jenkins said he based his authority to do so on the Texas Disaster Act and argued that a Tuesday temporary restraining order authorized him "to take certain actions...for the safety and welfare of Dallas County citizens."

But the governor has said "the time for mask mandates is over" and that "now is the time for personal responsibility." In a news release announcing the petition in the 5th Court of Appeals, Abbott said Jenkins' order is in direct conflict with Executive Order GA-38, which prohibits governmental entities and officials from mandating masks.

Attorney Brent Walker of Aldous Walker LLP in Dallas, the firm that helped Jenkins draft the request for a temporary restraining order that was later granted by District Court Judge Tonya Parker, said if challenging Abbott's order "saves one life, it will have been worth it."

Walker said each county judge has authority under the Texas Disaster Act to do the things necessary to try to protect the citizens of that county.

"I don't know if Governor Abbott is even going to dispute the fact that face coverings would be helpful. I think he may just be pushing the issue that he believes he has complete authority in Texas to make whatever decisions he wants," Walker said.

Dale Carpenter is a constitutional law expert and professor at Southern Methodist University's Dedman School of Law. He said the governor's authority, while broad, is not unlimited. He said he believes that Jenkins argument - that there will be irreparable harm if he doesn't act - is a strong one.

"A very strong case to make - that that the citizens of Dallas and the students of the school district will face irreparable harm if some mitigation strategies, that are welcomed and advised broadly by public health authorities, are not taken," Carpenter said.

Carpenter added that the data on the delta variant of COVID has "changed dramatically."

The temporary injunction allowed Dallas County Judge Clay Jenkins to move ahead with county-wide mask rules for at least two weeks. A temporary injunction hearing to debate the underlying legal challenge is required within 14 days, at which point Judge Tonya Parker will hear witness testimony from health officials, school administrators and parents who have added their voices to the case, as well as attorneys for Governor Abbott.