A suggestion up for discussion among council members later this year is limiting scooter availability at night and setting a curfew for use. 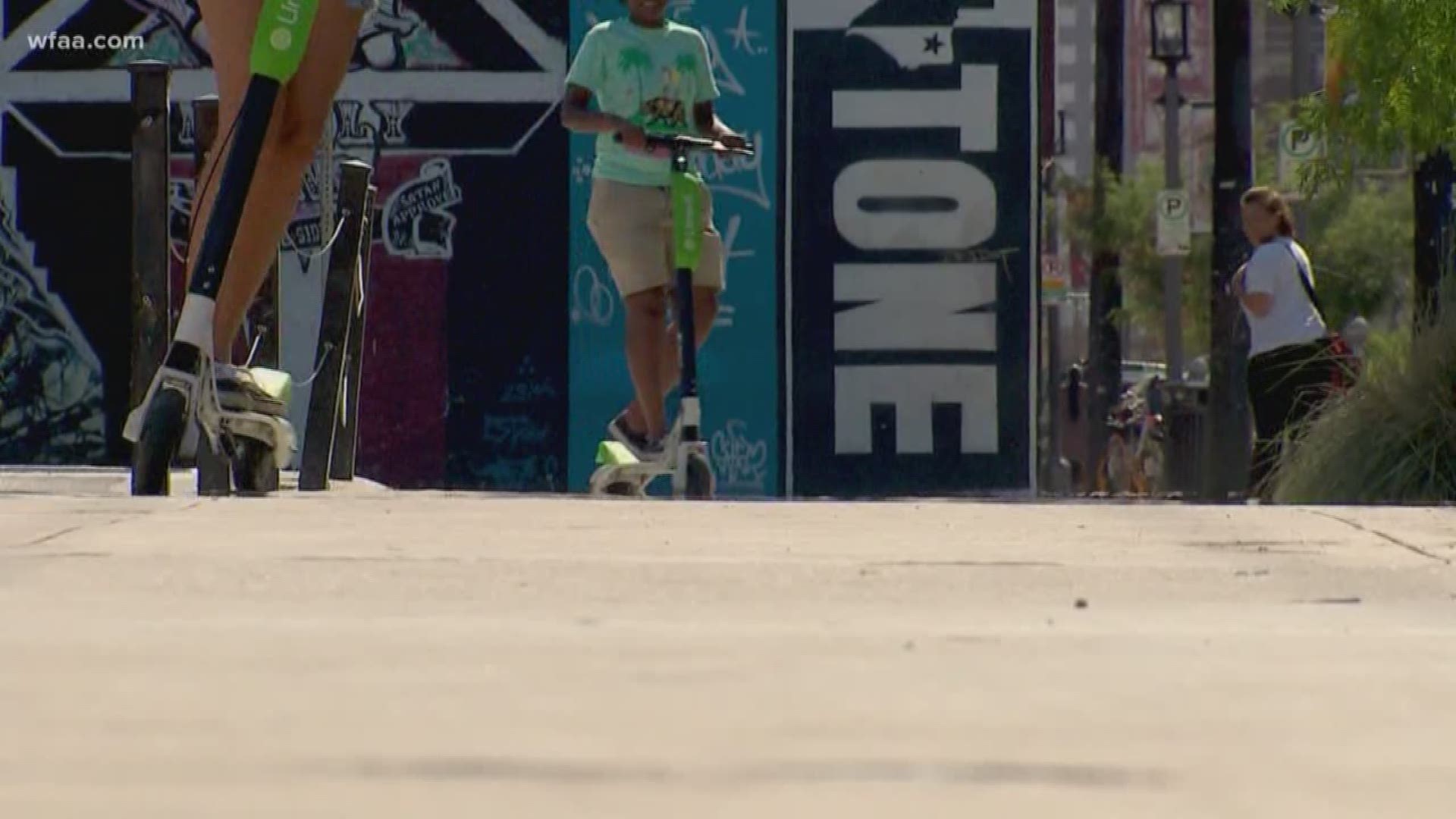 At the end of June, the City of Dallas passed regulations for bike share companies and gave the green light to electric rental scooters — which can travel up to 15 mph — after the rider pays a fee.

As of Monday, five companies offer rental scooters in Dallas. Those companies are Lime, Bird, Ojo, Jump, and Lyft.

Spin has been permitted to offer e-scooters but hasn't hit the streets just yet.

After e-scooters hit the streets, WFAA did several reports regarding riders and bystanders who were injured in scooter crashes.

RELATED: Someone is trolling SXSW scooter users with these stickers

In early November, Baylor Scott and White in downtown Dallas polled emergency department doctors for WFAA about the number of injuries related to scooter accidents that they've seen.

That number was up to 480. In reality, it's actually much lower.

The hospital around that time started to seriously track injuries surrounding e-scooters and decided to share what it found with the City of Dallas.

Karen Mynar, the Trauma Injury Prevention Coordinator at the hospital, helped develop a system that would identify a patient's injuries as scooter related when they arrive.

Before scooters dropped in Dallas, there wasn't a system like it. Mynar started from scratch and began collecting data back to June of last year.

"It started out as, 'Wow, we're seeing a lot of these injuries,' and we wanted to know how many that might be," Mynar said.

"When we started pulling those numbers, we realized this is bigger and more significant than we thought it was going to be."

Below are key data numbers surrounding scooter injuries collected by Mynar and her team since June of last year:

But Mynar dug a little deeper. The below info was collected from injured riders seen at Baylor Scott & White between June and January.

Mynar also found that e-scooter injuries have generated a total cost of $1.4 million to the medical center downtown.

Those costs may never be recovered by the hospital. And since it is a level 1 trauma center, taxpayers may even help reimburse that cost.

Per Mynar, Baylor Scott & White can get reimbursed by tax dollars through the state and the federal government to help offset uninsured costs it absorbs through being a level 1 trauma center.

According to the Texas Hospital Association, trauma hospitals in the state bear more than $320 million in uncompensated trauma care costs each year.

Mynar added that the uninsured costs have dealt an unanticipated financial blow to the trauma center downtown.

Mynar will present her findings next week at the annual conference for the Trauma Center Association of America.

LIMITED SCOOTER USE AT NIGHT?

A source within Dallas City Hall told WFAA that council members may make tweaks to its rental bike and e-scooter ordinance later this year.

A suggestion up for discussion is limiting scooter availability at night in Dallas and setting a curfew for use.

That suggestion is emphasized not only by the data Mynar collected but also the death of Jacoby Stoneking.

Stoneking’s body was found off Munger and Terry near I-30. Dallas Police said he contacted a witness, stating he had just fallen off a rental scooter and requested them to order him a Lyft.

But by the time that driver showed up, investigators say that Stoneking was unresponsive, so 911 was called and he was rushed to the hospital.

His brother, Chris Phillips, said he would like to see city leaders do more to protect riders.

That includes, he said, holding rental companies accountable for the safety of their products.

"I think it’s important that those companies give us a product that doesn’t have to be unpredictable," Phillips said. "They need to give us something that is reliable or at least close to reliable 100 percent of the time so we don’t lose family members."

"There are a number in my family who would like to just see them gone completely—where I think that we just need something that’s going to be safe for everyone," Phillips added.

"Right now...they’re just not doing that."