“It really justifies the reason why people are protesting – because of the exclusion." 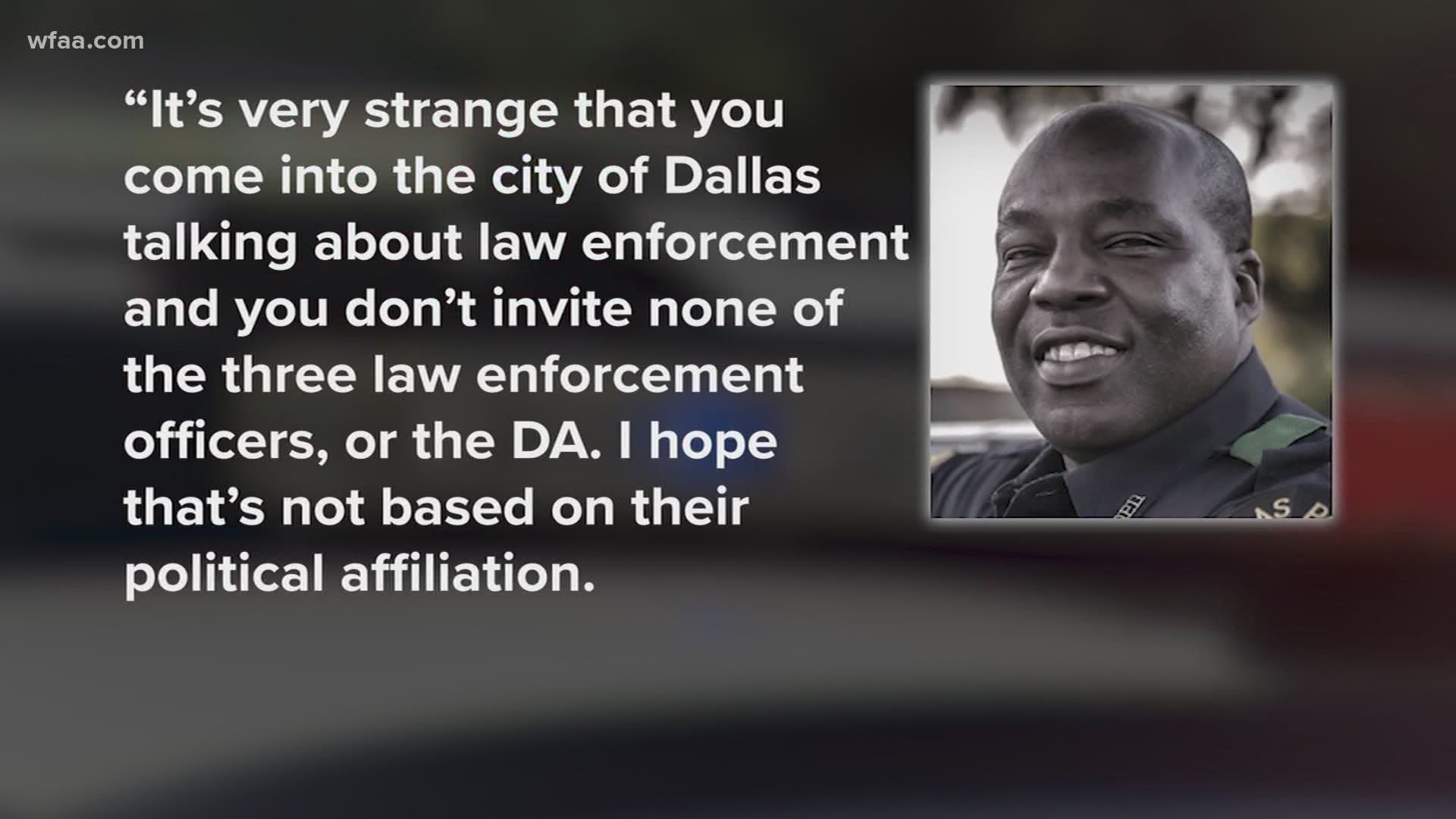 DALLAS — From the moment President Donald Trump landed at Love Field until he departed, officers from the Dallas Police Department provided protection.

But Dallas Police Chief Renee Hall was not invited to meet with him.

“It really justifies the reason why people are protesting - because of the exclusion,” said Dallas Police Sgt. Sheldon Smith, president of the Dallas Chapter of the National Black Police Association. “We will never, never get where we want to go if we don’t have a well-rounded table to discuss the issues.”

Most of the people invited to participate in Thursday’s panel on race and policing were African-American, including Glenn Heights Police Chief Vern Dooley. Glenn Heights is a city with a population of about 13,000 people in southern Dallas County.

Smith said, “It’s very strange that you come into the City of Dallas talking about law enforcement and you don’t invite the three law enforcement officers…I hope that’s not based on their political affiliation. You have to move beyond that and do what’s right at this point.”

One Dallas police officer was invited to take part in the president’s panel discussion.

Dallas Police Officer Frederick Frazier is also a member of Trump’s Presidential Commission on Law Enforcement and the Administration of Justice.

He condemned what happened to George Floyd at the hands of the Minneapolis Police Department, saying he wants the citizens of Dallas to know they are being seen and heard.

“We’re going to make this better,” he said.

Trump unveiled what he called his “vision of advancing the cause of justice and freedom.”

His four steps to building “safety, opportunity and dignity” are: more economic investment in black communities, more investment in healthcare in impoverished communities, a push for school choice, and increasing training for police departments.

He labeled calls to defund police as “radical.”

He reiterated his belief in law and order and said several times that police have to dominate the streets, but with compassion.

He said an executive order will encourage police departments nationwide to meet the most current professional standards for use of force including de-escalation tactics. He’s also encouraging pilot programs to allow social workers to join law enforcement on calls.

Texas Democrats were quick to criticize.

“No one can watch the video footage of what police did to George Floyd without being horrified to a call to action,” said U.S. Rep. Marc Veasey, D-Fort Worth.

“And yet Trump has no real plan to end police brutality or address racial inequality. His administration won’t even admit that systematic racism exists within law enforcement.”

Smith said people will keep marching when they feel like they aren’t being given a seat at the table.

“Perhaps not doing the right thing on issues has brought us to where we are now,” Smith said.

“If we don’t have representation we’ll never have a solution and people will forever be frustrated by what’s going on in the world.”