Some Dallas businesses are hot spots for drugs and violence. The City wants to shut them down.

Editor’s note: This story has been updated to clarify what data was analyzed and what date range was used. After our data analysis was called into question by a documentary filmmaker we decided to dig deeper into crime-tracking numbers. Here’s what we found: Behind the numbers: Dallas wants to shut down businesses known as hot spots for drugs and violence

Few things erode the quality-of-life in a neighborhood like a property where crime happens over-and-over again.

But does shutting down a business make the area safer? It's a question local business owners are grappling with as the City of Dallas tries to shut down properties that are hot spots for crime.

Where does Dallas get the power to challenge the right of a business to operate?

It’s a state law called the “common nuisance” law. To get that label, the property must be the site of habitual “criminal activity”, the owner must “knowingly tolerate” the crime and the owner “fails to make reasonable attempts” to reduce crime.

Once the property is labeled a “common nuisance”, a city can ask the owner to “abate the nuisance”, take steps to reduce crime and ultimately, a city can take a non-cooperating business to court with the goal of getting it closed for a year, effectively shutting the business down.

Dale Davenport, owner of Jim's Car Wash on MLK Boulevard since 1993, fought the City of Dallas to keep his business open.

“I’ve wrote a lot of checks to lawyers and I’m going to write a lot more because this is wrong. This is a taking,” Dale Davenport said. “The City of Dallas murdered my business.”

Just a few months ago, Davenport was forced to close the car wash.

“It makes me sick as a small [business] owner to be shut down like this, absolutely,” Davenport said.

The fencing around the business now is seen as a victory for the City against a business that, it says, tolerated criminal behavior.

A claim Davenport has always maintained as bogus.

“I know I did everything possible I could do to abate this,” Davenport said.

The City disagreed.  After a more than ten-year-long dispute, which included the City suing Davenport under Chapter 125 of the Texas Civil Practice and Remedies Code, the "common nuisance" law, the City took a different route in 2017 to shut down the car wash.

RELATED: South Dallas car wash known as a 'magnet for crime' to close, city board decides

The Dallas City Council changed the zoning in the area to not allow a car wash. Later, after Jim's remained open, code violations in 2018 provided the City with the legal avenue to permanently close the car wash.

“It’s a huge emotional toll, but I’m dug in down here,” Davenport said.

Davenport plans to sue the City of Dallas in state and federal courts.

Davenport told WFAA he doesn't believe closing the car wash has made anyone safer -- just that it's taken away a profitable business.

In just the four months before the car wash closed, there were 11 reported crimes. All of them were violent, from robbery to aggravated assaults, according to data provided by DPD.

Those stats include the murder of 56-year old Sheila Sanders in May 2019, who was sweeping at the car wash when she was killed.

Since Jim’s shut down in July 2019, there's been just one reported crime in the 500 foot radius around the car wash.

That's the reality that Derrick Lenzy lives every day.

For the last two years, Lenzy has lived at the Meadows at Ferguson apartment complex behind a Texaco gas station on Ferguson and I-635 in northeast Dallas.

“Every day, I’m just fed up with it,” Lenzy said. “We can’t go anywhere, we have to find another store.”

The store, at 11770 Ferguson Road, is one of the habitual criminal properties that the City of Dallas is fighting to shut down.

The City sued in July after repeated criminal activity, most of it drug-related according to the City. There's also been violent crime at the store.

Mahir Amiri moved to North Texas for a better life after leaving his native Afghanistan where he served as a translator for United States armed forces.

Amiri was working as a security guard outside the Texaco when he was shot in December 2018.

His wife, Zahra, told WFAA through a translator her husband was the sole income earner for their family of five.

Amiri is paralyzed from the neck down and remains in the hospital.

"Her first hope is for her husband to get better," a translator said. "Currently, he has lost his memory.”

It's been 11 months since the shooting and no one has been arrested.

Earlier in November 2019, the Texaco gas station was one of three locations selected for the Dallas Police Department's pilot program for live surveillance camera monitoring -- an effort to reduce crime.

In the six months before the Dallas City Attorney’s Office sued the Texaco, there were 14 reported crimes within a 500-foot radius of the property. 11 of those crimes were violent, including a murder that happened in February 2019.

Since then, there have been 16 reported incidents. All but two of those were for violent crimes, like robbery and aggravated assault.

The shawarma sandwich is the signature sell at Asorock Grocery in Lake Highlands.

“You can get it spicy, spicy as you want,” Bockarie said. “It’s our biggest seller.”

Abraham Bockarie always had sales in mind when he opened the store. He wanted to create a space where Dallas's Nigerian community could get a taste of home.

The shopping center in the Whitehurst-Skillman area sits in the heart of one the most diverse communities in Dallas. As Bockarie found out, it's also a few hundred feet from one of Dallas’ most challenging crime hot spots -- the former J's Food Mart at 10041 Whitehurst Drive.

“I was very concerned,” Bockarie said. “I was scared, to be honest. I was thinking when I open someone is going to come smash and come in here and do whatever.”

The food mart used to be the area's biggest challenge, according to Dallas City Council member Adam McGough.

“People just knew this was the hub for the activity,” McGough said. “This entire area had been taken over because of one criminal nuisance property.”

The store is gone now.

McGough, a former community prosecutor, says the City tried for years to get J’s Food Mart to make changes, but it never happened.

The owner kicked the business out and agreed to tear down the building after the City of Dallas threatened to sue.

“Is the court process the best process? I wouldn’t say it is,” McGough admits. “But without it we get stuck in some areas where you can’t make progress.”

McGough adds that in this case, the strategy of enforcement worked.

In the year before it closed, the immediate 500-foot radius around the former J’s Food Mart saw 22 reported crimes. Half of them were for violent crimes -- like robberies and assaults.

Since it closed nearly a year ago, there have only been six reported crimes in the same area around the site of the former store.

“It’s been quiet. It’s been nice, no break-ins,” Bockarie said.

Bockarie understands that it's a time-consuming process to get the worst criminal properties either to cooperate and change -- or ultimately, close. 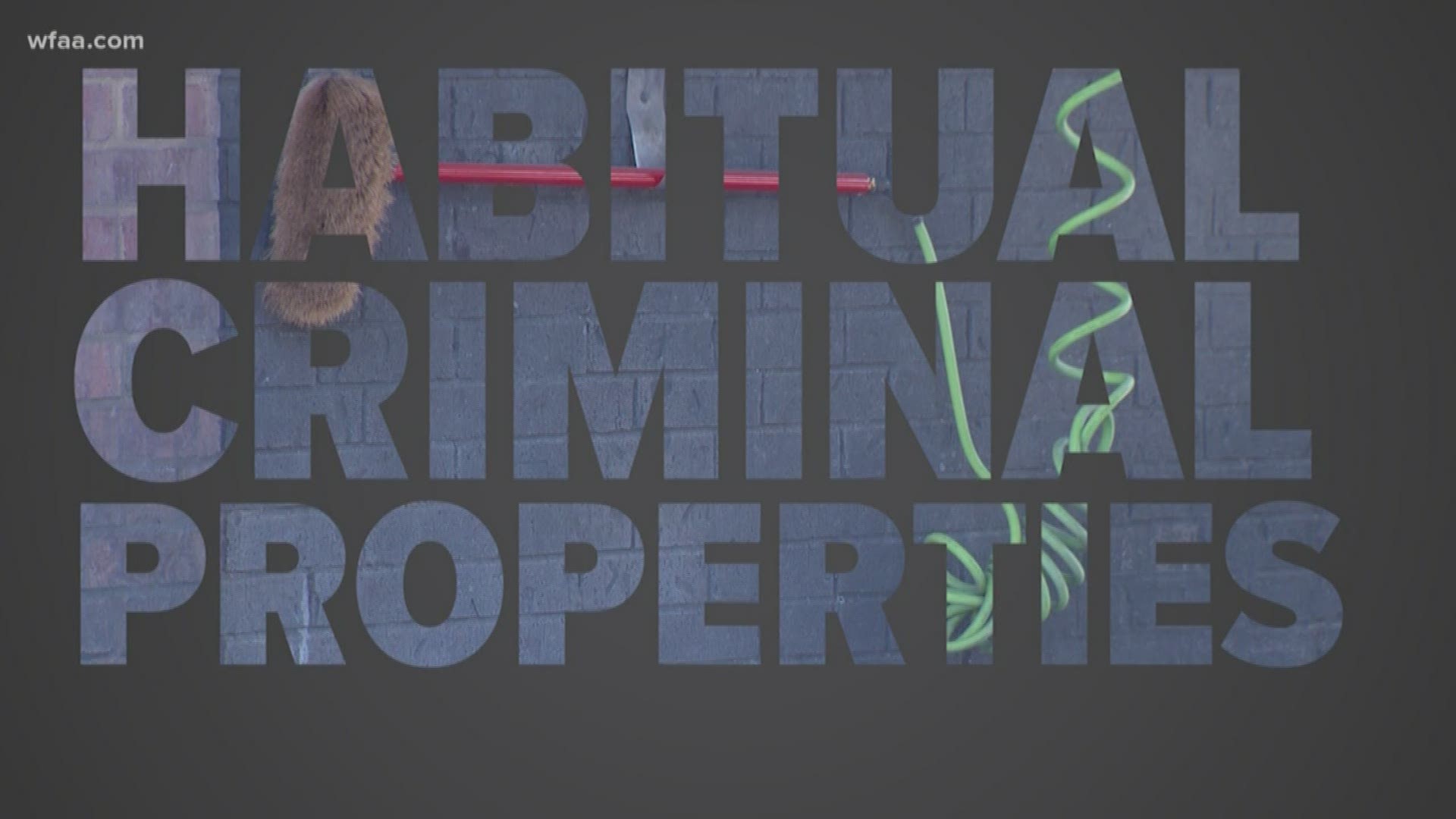