Fort Worth police say an arrest has been made in the homicide investigation where three people were found dead in a dumpster. 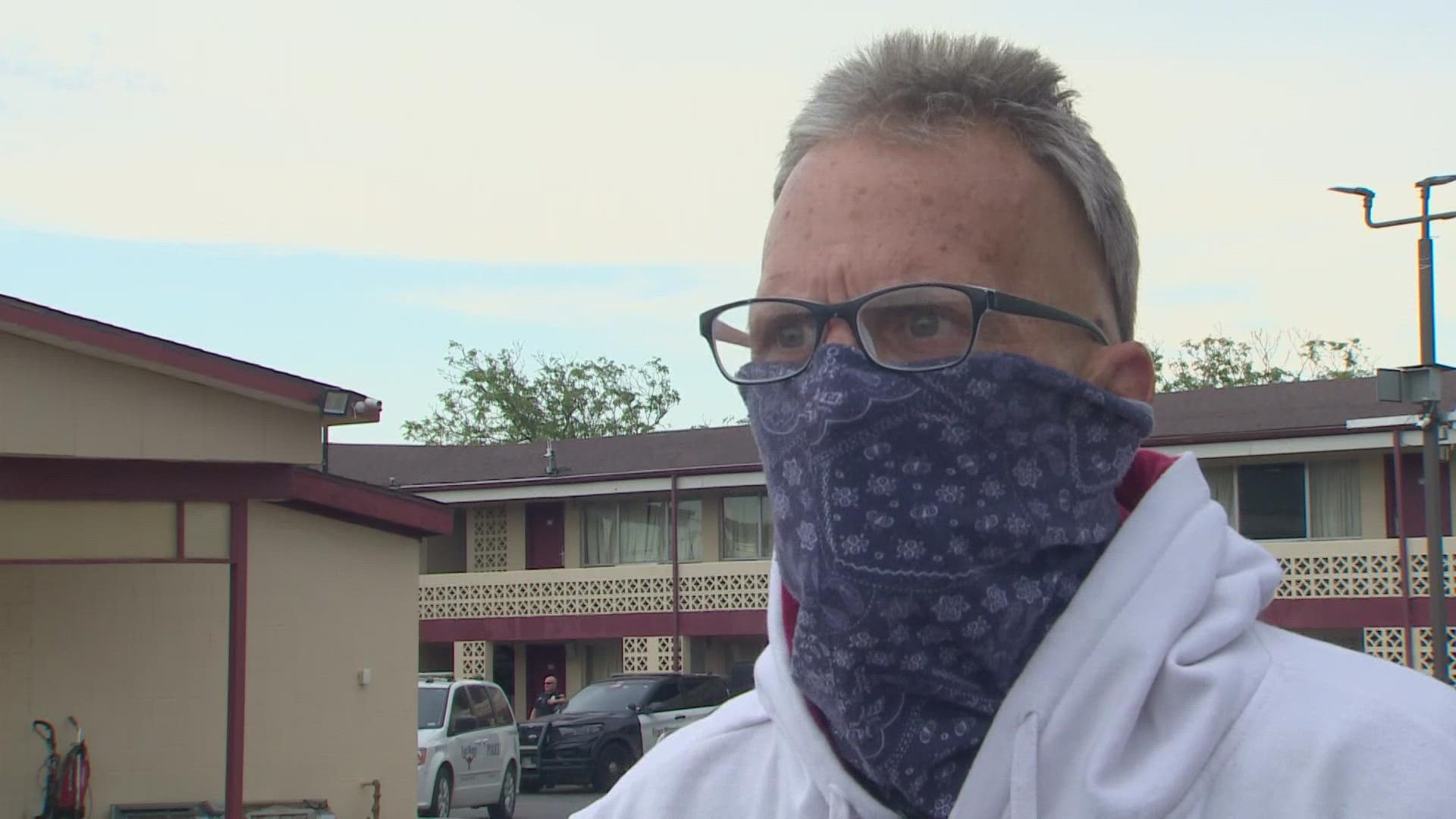 FORT WORTH, Texas — Updated Monday, Oct. 4, 2021 with the identity of one of the victims. The details in this story may be disturbing for some. Reader discretion is advised.

Fort Worth police say an arrest has been made in the homicide investigation where three people were found dismembered in a dumpster that was on set fire last week in the Western Hills area.

Jason Alan Thornburg, 41, was arrested Monday night in Euless, according to officials. He faces a charge of capital murder of multiple persons and is being held at Tarrant County Jail on a $1 million bond.

"This case was shocking and unsettling, and we knew bringing someone to justice in this case was paramount," Fort Worth Police Chief Neil Noakes said during a news conference Tuesday.

On Wednesday, Sept. 22, the Fort Worth Fire Department responded to a report of a dumpster fire outside a business in the 3100 block of Bonnie Drive.

While extinguishing the fire, authorities said three bodies were found inside the dumpster. Police initially thought one of the bodies belonged to a child, but clarified Tuesday that the three bodies found in the dumpster were adults. Police said all three were heavily dismembered, which made it difficult for authorities to identify them.

In the news conference, Fort Worth homicide detectives said they were able to identify Thornburg and his possible involvement based off of a Jeep Grand Cherokee that was seen in the area near the time the dumpster was set on fire.

Investigators began the process of finding the Jeep involved by cross-referencing nearly 7,000 vehicles in the area, police said.

During their search, police saw Thornburg's name - which was already familiar to detectives because he was a person of interest in a suspicious death investigation in the same area in May of this year - was listed as a Jeep owner, according to police.

Police eventually tracked down Thornburg to Arlington and asked him to come to the station, where he reportedly gave a confession of his involvement with the deaths of the people found in the dumpster and "went into intimate details" about how he killed them, police said.

“In my time in the homicide unit, we don’t have anything that resembles this," Sgt. Joe Loughman of the Fort Worth police department's homicide unit said. “I couldn’t even go into the psyche of someone who is able to do this.”

The warrant for Thornburg's arrest gave grisly details into the killings, which happened over multiple days. According to the document, Thornburg said he was being called to commit sacrifices.

Police were able to identify one of the victims found in the dumpster as 42-year-old David Lueras.

Lueras was known to frequent the Dallas area and had ties to the Hurst, Euless and Bedford areas. According to a warrant, officials were able to identify him based off of distinct tattoos that matched photos of Lueras and pieces of one of the bodies.

The second person was a young teenager or adult female. Fort Worth police identified the third person Monday, Oct. 4 as Lauren Phillips.

According to the warrant, Lueras had shown up to the motel five days before the bodies were found in the dumpster, and had stayed in the motel room with Thornburg. The other victims also met Thornburg at the motel, according to officials.

Scott Shaw lived just above Thornburg at the Mid City Inn and said the two had bonded over scripture.

Shaw said he'd recently asked Thornburg about an odor he'd notice coming from the area of his apartment.

“I said, 'JT, do you smell that? It’s down here by your room by this room', and he said, 'Yeah, I think somebody peed underneath the stairs'. I said, 'Nah, it don’t smell like urine to me'," Shaw said. "It was something else. I mean it was bad for a week.”

"We never suspected anything," manager Kanti Gandhi said. “I talked to him many many times and there was no suggestion – he never fought with me about anything.”

Connection to other deaths

During the news conference, police said Thornburg also confessed to a suspicious death in May that he was previously connected to.

In that case, according to the warrant, Thornburg's roommate died in a gas explosion at their Fort Worth home, but because of the explosion, the medical examiner's office was not able to determine a cause of death. The warrant said Thornburg admitted in his interview to police to "sacrificing" his roommate before uncapping the natural gas line and lighting a candle.

Crews appeared to be demolishing that home when WFAA crews went to the site, Tuesday.

Finally, the warrant said Thornburg admitted to also killing his girlfriend in Arizona, where she had been reported missing.

Because of the alleged connection between Thornburg and the crime out of state, authorities are now looking to determine if he could be tied to any other unsolved cases anywhere else - including across the country and internationally.