In a video posted on Twitter and a document released Friday, Bishop Edward J. Burns made a rebuttal to accusations accusing the Catholic Diocese of Dallas of withholding information as police investigate sexual abuse allegations. 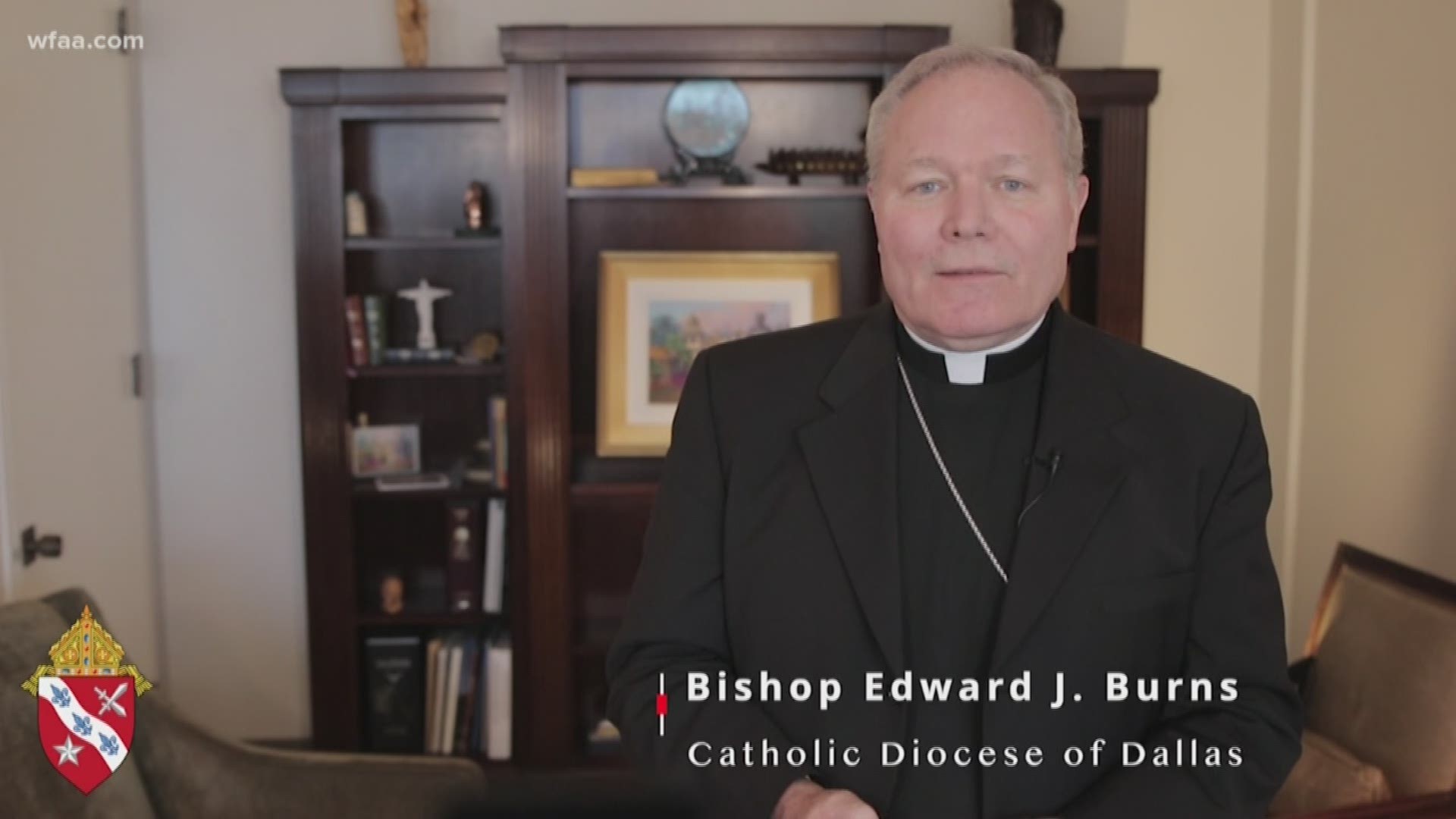 DALLAS — Bishop Edward J. Burns said a raid of Catholic Diocese of Dallas properties Wednesday made him feel "saddened" and as though the Catholic Church and Dallas police are enemies.

The bishop's comments were made Friday in a social video and document released in response to the Dallas police search warrant and raids of three separate properties as authorities investigate allegations of sexual abuse made against priests.

The investigation started in February 2018 regarding accusations made against Edmundo Paredes, a longtime priest at the Saint Cecilia Catholic Church in Oak Cliff. The investigation expanded into four more cases of sex abuse allegations involving diocese priests.

The warrant alleges that as police investigated the cases, the Catholic Diocese of Dallas repeatedly stonewalled detectives' efforts to obtain names of victims and accused priests, as well as full church files.

However, Friday, Burns responded to what the church calls "inaccuracies" in the police affidavit. He also reiterated what he said during a news conference Wednesday – that diocese leadership had been cooperating with Dallas police.

“The diocese had an open line of communication with DPD and had already provided police with the names and files of the five priests named in the search warrant,” Burns said in the video posted on the Catholic Diocese of Dallas Vimeo page.

But the search warrant says investigators wanted more than just the names and files of those the church deemed were “credibly accused.”

In one example in the warrant, Det. David Clark said that he asked the diocese for the "number of priests' files flagged for sexual abuse." The detective said that number was never given to investigators.

The bishop also said he was “saddened” that police carried out what he called “a highly publicized search.”

Burns said he was surprised investigators opted to search the diocese, a warehouse where church files were stored and a Catholic church in Oak Cliff.

“I recognize that some may question the church’s credibility and transparency in this matter but any suggestion that the diocese was not cooperating in good faith is simply not true," Burns said in the video.

The bishop rebutted accusations that the diocese was purposely holding back files.

In the warrant, Clark mentions a file handed over to police by the diocese on Richard Thomas Brown, who served the church for 22 years. Clark said he talked to a victim who claimed she was assaulted by Brown in the '80s and reported the abuse in 2004. However, the accusation wasn't noted in Brown's file. The detective said when he told this to the diocese, they later handed over 51 more pages, a few of which noted the accusation.

But Burns says these pages were simply later discovered as the diocese spent "hours combing through thousands of files, some of which were decades old."

"To imply that these documents were intentionally withheld in any capacity is to truly misrepresent the nature of our correspondence with the Dallas Police Department," the bishop said.

In the written response, Burns also addressed concerns brought up in the warrant regarding the team compiled by the diocese to investigate the case.

"The Dallas Police Department is aware of the identities of some of these members, yet still feels the need to imply that they lack the credentials to give advice on the credibility of an allegation for the purpose of, again, determining ministerial suitability," Burns wrote. "The Diocesan Review Board consists of two local police chiefs, a clinical child psychologist who specializes in child abuse victims, a doctor and an attorney."

The affidavit also notes that the diocese's team of investigators were originally hired to investigate theft allegations against Paredes, not sexual assault allegations.

"In light of this, I am certainly open to members of the Review Board coming forward to identify themselves," Burns wrote. "It is up to them to do this, of course. As a shepherd of the flock, I respect that they may prefer privacy and recognize that their role on the Review Board is entirely voluntary."

Burns said there were "a number of technical issues in the affidavit that will be addressed by lawyers and the Dallas Police Department" but that the diocese will continue to work with investigators.

"We do not want to feel as if we are your enemies, but that is precisely what we have been made to feel today," he added. 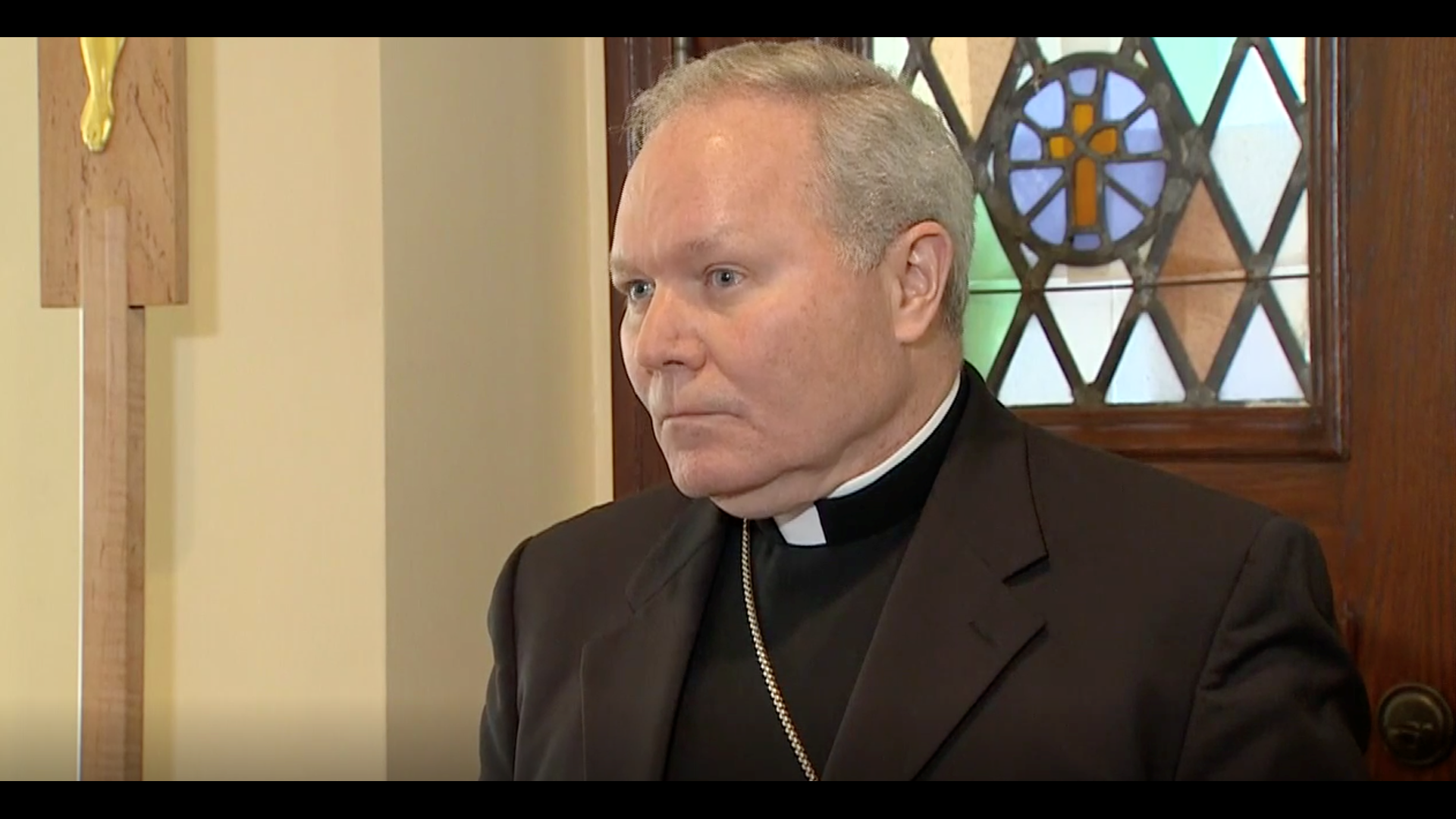