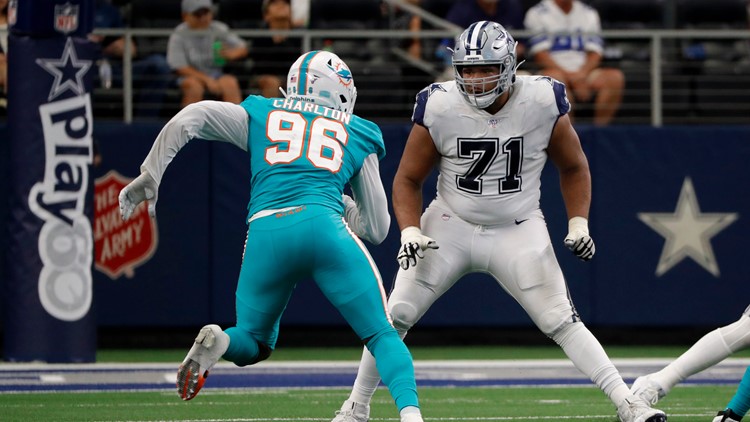 DALLAS — With the 2010-2019 decade all wrapped up, and the 2020 NFL Draft coming sooner rather than later, we’re taking a look back at some of the biggest misses in the draft for Dallas during the era.

For all the good the Cowboys did with the selections of Tyron Smith, Zack Martin and Travis Frederick, among others, they still had a few gaffes that left fans scratching their heads.

This particular selection was a hot button issue for fans and media even before the pick was made. Dallas was picking late in the first round after becoming the NFC’s No. 1 seed following a great draft class in 2016 and even better season. Then they fell to Green Bay again in the Divisional Round of the playoffs.

Picking so late lead to Dallas saw a run of players they were linked to go off the board before they were able to make their pick. However, with J.J. Watt’s brother T.J. still available for the Cowboys, many felt like he was the best choice for a team in search of a pass rusher that could impact the team from the weakside the way DeMarcus “Tank” Lawrence did on the other side.

There seemed to be a disconnect between the scouts and coaches as they ultimately chose Taco Charlton out of Michigan instead. It’s always easy to second guess an NFL draft pick but many were first guessing the Charlton pick from the start.

Even so, normally a player wrapping up his third season in the league wouldn’t make a list like this but given the fact that Dallas released him during the 2019 season without much to show for their selection, it’s not hard to see why he’s here.

Charlton never seemed to mesh with the coaching staff and recorded just four sacks in 27 career games for the Cowboys. However, the talent that made him a first-rounder existed and his season in Miami made the waters a little more murky.

After being picked up by the Dolphins, Taco finished his first season in Miami with five sacks in 10 games. Was it that Charlton didn’t feel comfortable in Dallas or is the staff to blame for his lackluster performance? The Charlton saga became one of the bigger mysteries of the last few seasons, especially for a team that has drafted and developed talent pretty well.

Regardless, the Watt vs Charlton debate will likely forever rage. It will be difficult for Charlton to come out on the winning side with how well Watt has performed in Pittsburgh with 34.5 sacks in 47 career starts and some NFL Defensive Player of the Year talk in 2019. Even if Charlton does live up to his first-round billing in Miami, it won’t be for the Cowboys and that makes it a big miss in Dallas.

The Cowboys made out pretty well in the 2016 draft with Zeke Elliott, Dak Prescott, Jaylon Smith, and several contributors. The 2017 draft class was a different story, with a second player earning a spot on this list. Ryan Switzer out of North Carolina was a player with similar size and stature to Cole Beasley and a highlight reel filled with similar playmaking skills as a slot receiver.

The hope was for Switzer to eventually become Beasley’s newer model but initially most were looking for Switzer to breathe life into the return game. And indeed, Switzer did give Dallas their only punt return for a touchdown since Dwayne Harris was on the team with a score in his rookie season. Since that return touchdown, the Cowboys haven’t had another.

Normally a player selected in the fourth round shouldn’t be considered a bust since players selected on the third day of the draft can be a long shot to begin with, but the Cowboys were so disinterested in developing Switzer as a receiver that they traded him following his rookie season.

Jihad Ward – the player Dallas received from Oakland for Switzer – didn’t even make the final roster cut at training camp that year. This is ultimately less a Switzer failure and more of a blown use of draft capital. It was made even more frustrating by the fact that Iowa tight end George Kittle was still on the board and well, you’ve seen the type of player he has become for the San Francisco 49ers.

During the 2015 NFL Draft process, many felt like the Dallas Cowboys walked away with three first-round caliber players with S/CB Byron Jones as their actual first round pick, OL La’el Collins as an undrafted free agent following pre-draft issues, and Randy Gregory as an elite performer at Nebraska with question marks.

Gregory had his fair share of off-field concerns that allowed the team to select him in the second round. The Cowboys have never been a franchise that shied away from players like Gregory and have always shown the willingness to take chances on talent.

Alas, it hasn’t worked out for Gregory or Dallas as he's played in just 28 games over five seasons thanks to several league suspensions for substance abuse.

After missing all but two games in 2016 and all of 2017, there was hope that Gregory had turned a corner in 2018. That season, he appeared in 14 games while recording a career-high six sacks. The skills were there but his ability to show it on the field wouldn’t last. He was suspended indefinitely prior to the 2019 season and his future in the NFL remains unclear.

Given his talent level, Gregory might ultimately be remembered more as a member of the players that never were team.

The next selection after Gregory saw Chaz Green brought in to be the Dallas Cowboys’ swing tackle behind Tyron Smith and Doug Free. The Florida Gator standout dealt with injuries during his first two seasons in Dallas, which ultimately led to surgery on a herniated disc in 2016. This was after he started two games that year for an injured Smith in quarterback Dak Prescott’s rookie campaign.

The Cowboys tried to move Green inside to guard after the departure of Ronald Leary to free agency following the 2016 season. Again injuries slowed down Green and eventually the Cowboys went with former first-round selection and free agent pickup Jonathan Cooper to fill Leary’s spot. Against Atlanta in 2017, Green would be thrust into the starting left tackle spot for an injured Smith while Ezekiel Elliott was in the middle of a suspension.

That game started a downward spiral for Prescott and Dallas. Green allowed five sacks to Atlanta’s Adrian Clayborn before the Cowboys pulled him in favor of Byron Bell. Following the game and leading into the next season, it felt like Prescott didn’t trust his protection. His timing didn't feel right until Marc Colombo was brought back aboard to coach the offensive line after the bye week in 2018.

Green was released prior to the start of the 2018 season.

When the Dallas Cowboys traded up to select Mo Claiborne of LSU with the sixth overall selection in the 2012 NFL Draft, many thought he would be their shutdown corner for the next decade. Unfortunately, Claiborne only made it through his rookie contract and wasn't re-signed beyond the 2016 season.

The Cowboys gave up their second-round pick that year to move up eight spots to grab the 2011 Jim Thorpe Award winner for the nation’s best college defensive back. Unfortunately for Dallas, Claiborne just couldn’t stay healthy and never lived up to the hype.

During his rookie season, Claiborne played 15 games after missing most of the offseason workouts due to surgery on his wrist. He would play in 32 games overall in his remaining four seasons in Dallas, including just seven in his final year with the Cowboys. He recorded four interceptions in five seasons before moving on to the Jets and Chiefs.

For a player who was thought to be perhaps the best cover corner in years when Dallas selected him, it was ultimately a disappointment for a CB picked sixth with the expectations of many a pick 6 to come.

Who do you think was the best and worst NFL Draft selection of the last decade for the Cowboys? Share your picks with Patrick on Twitter @DraftCowboys.