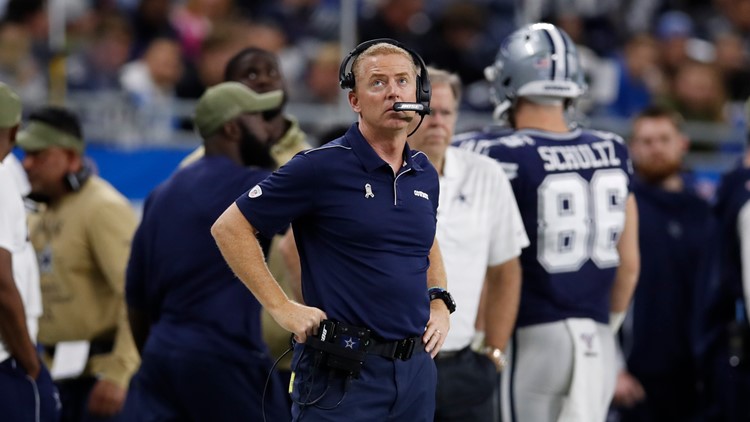 The myth of the Jason Garrett hot seat in Dallas

Watch out! The Dallas Cowboys lost a game, so, head coach Jason Garrett is on the hot seat.

It has been the immediate headline after every one of the Cowboys' five losses in 2019. Like a mouse that stops jumping after a conditioning response, the manta of the eighth head coach in team history being close to unemployment gets old.

Consider this: the 53-year-old is in the final year of his contract. That is the biggest hot seat of all. To earn that next contract from owner, president and general manager Jerry Jones, Garrett is going to have to show progress, not regression or stagnation.

Also consider this: if Dallas were 10-1 like the San Francisco 49ers or 9-2 like the New Orleans Saints, would it be any different?

Certainly, there might be more optimism around the Dallas-Fort Worth area if the Cowboys were on track for one of the two first-round byes. But that is a round that Garrett has failed to get his team to the next level in three tries, one of them at home with home-field advantage theirs for the entire 2016 playoffs.

When Tony Romo was the starting quarterback from 2006-15, he got the blame for the entire franchise's playoff failures during his first three seasons. Dallas was 0-2 in the playoffs in the years that began his tenure as the franchise field general.

It was his fault the Cowboys hadn't won a playoff game since 1996, even though he had only had really any measurable control of the situation for three years. Nonetheless, it was Romo’s fault. This narrative was an inequitable, misguided opinion perpetuated by people who frankly should know better. But no one ever lost money agitating Cowboys fans.

Then, Bill Parcells endeavored to rebuild the Cowboys from 2003-06, and Wade Phillips reaped some of the benefits from 2007 to midway through the 2010 campaign when he was fired for a 1-7 start.

Garrett has had eight full seasons since his promotion from interim coach in 2010 to head coach on Jan. 5, 2011. He has had 128 games, along with five playoff games. Sure, every one of his divisional losses has been one-score contests, but the fact is that the conference championship is the one level he has not topped.

In 2014, when Garrett was last on an expiring contract, he had never led Dallas to the playoffs despite the past three Week 17 games being play-in games with the NFC East on the line. The Cowboys lost to New York, Washington, and Philadelphia in consecutive seasons.

When the Cowboys won the NFC East in 2014, the next step was to show what Garrett could do in the playoffs. Romo executed a fourth-quarter comeback against the Detroit Lions at AT&T Stadium, and Dez Bryant's catch was overturned as an incomplete pass in Green Bay in the divisional round.

Garrett could get the team on the dance floor and close enough to hear the music, too.

That's not going to work in 2019. Losing in the divisional round is old news. This is the 25th season since the Cowboys' last conference championship game appearance. Garrett is on his ninth full season to do something about it.

Garrett will have a tough task ahead of him. Since 1990, when playoff formats were last altered to add a second wild-card per conference, 28/116 of the wild-card round winners ended up winning in the divisional round.

Dallas is currently 6-5 and holding the fourth seed as part of their first-place prize in the NFC East. Their opponent would be the Seattle Seahawks.

If they lose to Seattle at AT&T Stadium in the wild-card round, that will be a regression and the Joneses will have to think hard about extending Garrett. The same goes if Dallas beats the wild-card and loses the next week in the divisional round.

The nature of the expiring contract is its own hot seat, and the real indicator of whether Garrett gets burned is if the team gets to the conference championship game. At the rate it's going, Garrett could be the coaching version of Neil Howie being shoved in a giant wicker idol.

Do you think this season will be the end of Jason Garrett or will the Cowboys rally to save his bacon once again? Share your thoughts with Mark Lane on Twitter @therealmarklane.