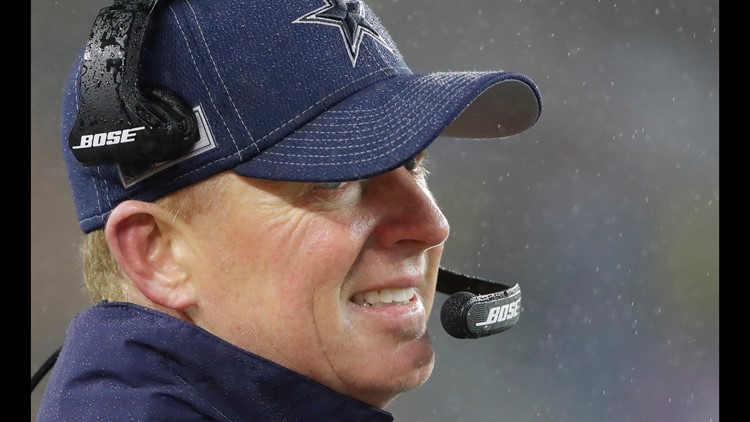 Photo by: AP
Dallas Cowboys head coach Jason Garrett watches from the sideline in the second half of an NFL football game against the New England Patriots, Sunday, Nov. 24, 2019, in Foxborough, Mass. (AP Photo/Steven Senne)

DALLAS — The Week 12 encounter between the Dallas Cowboys and the New England Patriots was billed as a measuring stick for where the NFC East leaders were in comparison to the rest of the league.

There was no better place to see how the Cowboys shaped up than Gillette Stadium, the home of the 9-1 Patriots where they had not lost a home game since 2017.

However, what the Cowboys proved during the rainy, windy 13-9 loss to New England was not what the organization expected.

Go for it — Dallas faced a fourth-and-7 from the New England 11-yard line with 6:08 left in the game down 13-6. Instead of going for it, coach Jason Garrett elected to send kicker Brett Maher out for a 29-yard field goal. It didn't really do anything for Dallas other than delay the inevitable.

To win the game, the Cowboys would still have to drive for a touchdown. This was the second-closest the Cowboys had been inside Patriots' territory. While the Cowboys forced a punt and got the ball back with all three timeouts, they were tasked with the prospect of driving 92 yards for the win.

Garrett should have gone for it fourth-and-7 from the 11 because it was an AFC game. The risk was immaterial because the outcome didn't really have an effect on tiebreakers. In a situation such as that one, why not take risks especially when the downside isn't as damaging?

Special teams less than special — For the first time since Jan. 1, 2017, punter Chris Jones had a punt blocked. Dallas had five of their 12 drives start inside their own 20-yard line while the Patriots had zero. The Patriots had three drives start beyond their own 35-yard line, and that's even including the blocked punt and Dak Prescott's interception.

While the Patriots only turned one of those drives into three points, that's a pretty good ratio considering the conditions and the game. The Cowboys had two drives start at their own 30-yard line or closer, and they turned both of them into Brett Maher field goals.

In addition to securing a clean transition of possession, special teams are about finding the hidden yardage and creating small advantages that compound throughout the game. The Cowboys' special teams gave up seven points worth with the blocked punt, which ended up being the difference in the game.

The defense was stellar — The last time the Patriots scored 13 points in a game was Super Bowl LIII. The defense managed to limit quarterback Tom Brady to 17-of-37 for 190 yards and a touchdown. Dallas also managed to drop Brady for two sacks and consistently get pressure on the future Hall of Famer.

Running back Sony Michel was effective with 20 carries for 85 yards, and receiver Julian Edelman had eight catches for 93 yards. However, there wasn't that dominant performance from the Patriots that everyone has come to expect.

Coming into the game, the Patriots were 9-10 when held to 300 yards or fewer since 2012 in offensive coordinator Josh McDaniels' return to the team. The defense did their part to give Dallas a chance to win the game.

Where do they go from here? — Owner Jerry Jones was disappointed after the game and called the loss a "significant setback."

While it is true the Cowboys proved they could not beat the best team in the NFL, the reality is they lost no ground in Week 12 in their quest to win the NFC East, which is their most likely entry point into the playoffs. However, they did miss a chance to gain ground.

The Eagles' remaining schedule features four games against 2-9 teams. At a minimum to make the playoffs, Dallas needs to leave the Week 16 bout in Philadelphia with a win and the same record as the Eagles. In doing so, it kicks in the head-to-head tiebreaker, gives Dallas the NFC East lead, and all they have to do to win it is beat Washington at AT&T Stadium in Week 17.

The problem is Dallas has not shown the ability to beat playoff caliber teams. Once they get into the postseason, they could have a quick exit. What is puzzling is it's not like the coach or the quarterback have failed to complete comebacks or secure wins in late game situations.

They just haven't done it in 2019. You get the feeling that if they could just secure that one game-winning drive or fourth quarter comeback, the ability to win games like Sunday would activate.

Do you think holding the Patriots to just 13 points and being within a score of beating the NFL’s best team is enough for a moral victory for the Cowboys? Share your thoughts with Mark on Twitter @therealmarklane.