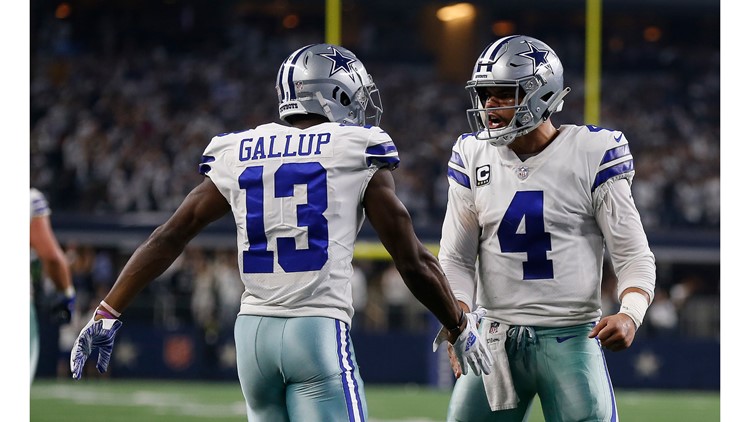 Week 12 fantasy football sits and starts: Should you play Prescott?

The Dallas Cowboys at New England Patriots is one of the most interesting games for Week 12 as America's Team takes on a franchise that has defined success in the new millennium. There are some fantasy value matchups to be had in the tilt at Gillette Stadium.

Here are recommended sits and starts:

Cowboys QB Dak Prescott ⁠— Taking a QB against New England seems to be a crazy proposition because the Patriots defense leads the NFL with the lowest opposing passer rating at 49.2, have the third-most sacks with 37, and have intercepted a league-high 19 passes.

They didn't manage to intercept Carson Wentz last week or Lamar Jackson in Week 9. Furthermore, Prescott is raising value of his impending contract extension with his play.

The former 2016 fourth-round pick from Mississippi State leads the NFL with 3,221 passing yards, is second with 21 touchdown passes, and has an 8.8 yards per pass attempt, the highest overall.

Prescott has been the driving force behind the Cowboys' offense the past two weeks, and he will be counted on to continue that in New England.

Patriots RB Sony Michel ⁠— The Cowboys defense gives up 4.2 yards per carry, and Michel averages 3.3 yards per carry. However, the red zone is where Michel is going to net fantasy owners points in Week 12.

The Cowboys defense, while ninth-best in the NFL with a 48.6% red zone conversion rate, has given up 10 red zone rushing touchdowns, tied for the fifth-most in the NFL. All six of Michel's rushing touchdowns have come in the red zone. The Patriots lead the NFL with 43 red zone attempts. There is no reason to believe New England won't have their chances against the Cowboys. When they do, Michel is a viable option.

Cowboys WR Michael Gallup ⁠— When receiver Amari Cooper gets locked down, as was the case in Detroit with cornerback Darius Slay guarding him, Gallup steps up and makes the big plays.

Look for it to be more of the same in Week 12 with Patriots cornerback Stephon Gilmore going against Cooper. Gallup will have no easy task as he faces the McCourty brothers on the other side of the field, but he certainly will have the chances to make New England pay. Gallup has the 13th-highest yards per reception in the NFL at 16.1.

Cowboys RB Ezekiel Elliott ⁠— Bill Belichick is known for taking away what a team does best, and even though Elliott has not looked like his two-time rushing champion self in the past two games, he still is what makes the Cowboys offense move. The Patriots defense is well equipped to bottle him up and render him ineffective just as the Minnesota Vikings did in Week 10.

Patriots defense/special teams ⁠— New England won't be getting the big turnovers they usually do because of the quality of quarterback they're facing. Prescott is playing a high level of football, and the Cowboys getting towards their scoring average of 28.6 points per game isn't unreasonable, even against the Patriots.

There are better matchups to be had in Week 12 rather than starting the Patriots defense/special teams.

Cowboys K Brett Maher ⁠— The "other boy" has yet to stack consecutive games without missing a field goal. He went 2-of-2 in Detroit last week. He is due to miss field goal at Gillette Stadium. Maher is 7-of-9 kicking outdoors this season, and there is expected to be light rain at kickoff.

Have the Cowboys been carrying you to victory? Share your fantasy league triumphs and mishaps with Mark on Twitter @therealmarklane.