A Tarrant County spokesperson said 8 people who tested positive for COVID-19 said they had been at AT&T Stadium. More than 128,000 people have attended games there. 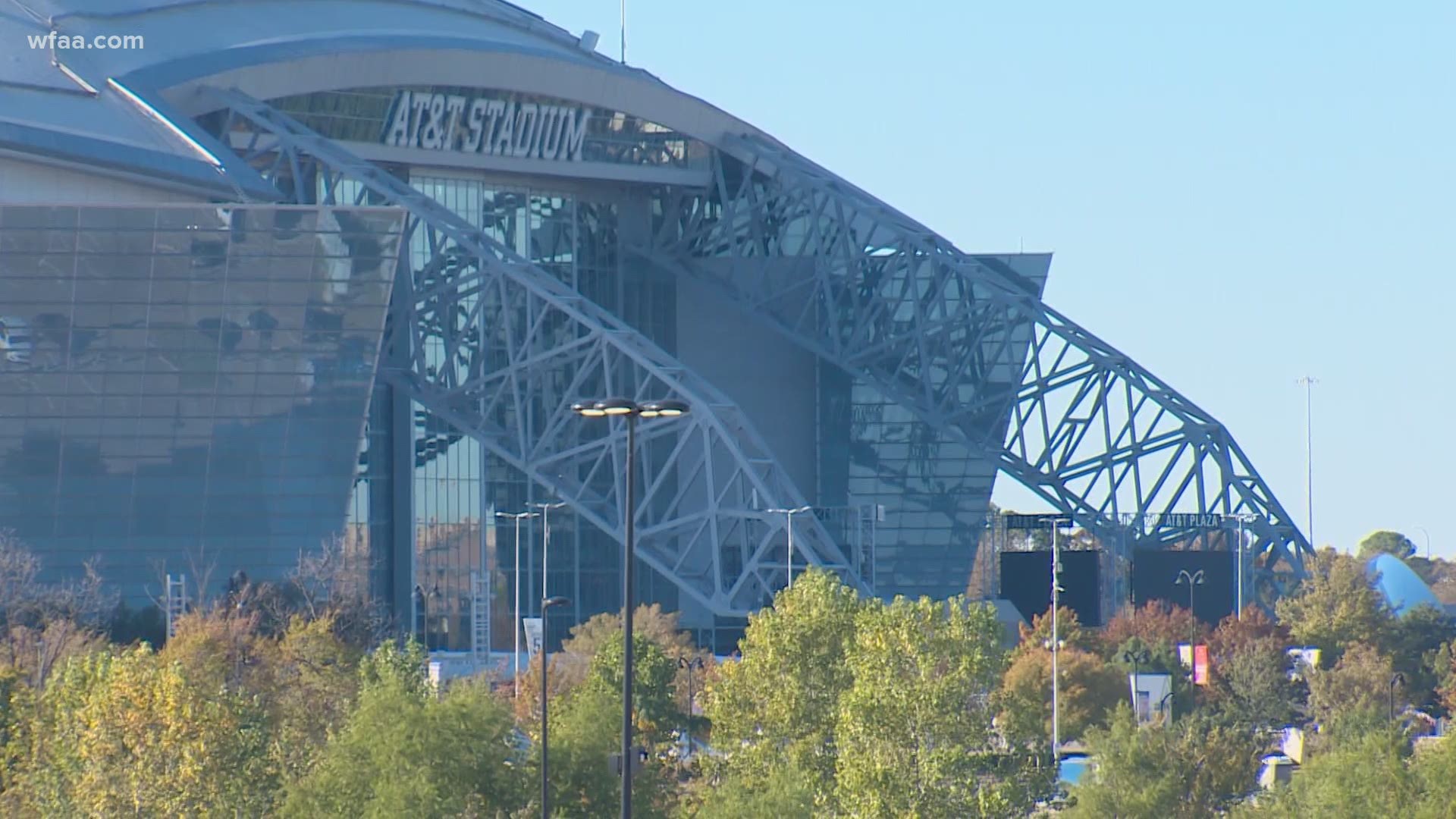 Updated at 6:33 p.m. with statement from AT&T Stadium, additional details.

As the NFL tightens its COVID-19 protocols and more teams announced they won’t be hosting fans, the Dallas Cowboys have made no such announcement.

Owner Jerry Jones has been adamant that fans continue to attend the Cowboys home games, even as teams including the Ravens, Eagles, and the Washington Football Team announced this week they won’t have fans at their next home games. A number of teams have never allowed fans to attend amid the pandemic.

On Tuesday Jones said, “We’ve had literally, literally we’ve had no one report that they’ve had contact and gotten any contact with COVID from coming to our football games; no one."

Tarrant County officials said Wednesday at least eight residents who tested positive for COVID-19 told contact tracers they recently attended events at AT&T Stadium in Arlington, according to a county spokesman. But AT&T Stadium officials said they hadn't been notified by county health officials of any contract tracing that included people who had been in the facility.

Tarrant County says the numbers don’t mean the people contracted the virus before, during or after the games, only that they told tracers they had attended before later testing positive.

RELATED: Jerry Jones on ‘aggressive approach’ to having Cowboys fans at AT&T stadium

Health officials say the exposures include:

The written statement from AT&T Stadium officials went on to say, “If an individual tests positive for COVID-19 and they are believed to have been infectious when they attended an event at AT&T Stadium, the stadium would typically be notified by local public health officials."

“Whether it’s a sporting event or a demonstration or any other large public gathering there’s always somebody there who has COVID," Tarrant County Health Director Dr. Vinny Taneja said. "It’s so prevalent in our community."

The stadium continues to adhere to local, state and federal COVID-19 guidelines, the emailed statement said, and works closely with city and county health officials.

Taneja was asked about spread during sporting events Tuesday.

Dallas County officials say they haven't had anyone who tested positive say they had recently been at a game.

Early Tuesday, Cowboys owner Jerry Jones said on his weekly radio show on “105.3 The Fan” he planned to continue increasing attendance at games.

Jones said they’re being sensitive to the fact COVID cases continue to increase across the NFL.

"That’s not being insensitive to the fact that we’ve got COVID, an outbreak, some people say, 'well maybe it is,'” said Jones. "No, not when you’re doing it as safe as we are and not when you’re having the results we’re having. We’ve had literally, literally we’ve had no one report that they’ve had contact and gotten any contact with COVID from coming to our football games; no one."

The league announced Wednesday that it was implementing the more intensive COVID-19 protocols for all 32 teams for the remainder of the season, as cases spike in communities across the country.

The restrictions include requiring negative tests the day before players and staff enter a facility, holding meetings virtually, outdoors, or indoors with a pre-approved plan, only providing grab-and-go meals, and requiring masks in all facilities, including on the practice field.

League testing has revealed that the rising number of cases among NFL players are tied to community spread, not spread within the teams, according to NFL.com.