Per a tally by the Dallas Morning News, 46 games have either been canceled or postponed since 6A and 5A schools returned to the gridiron. 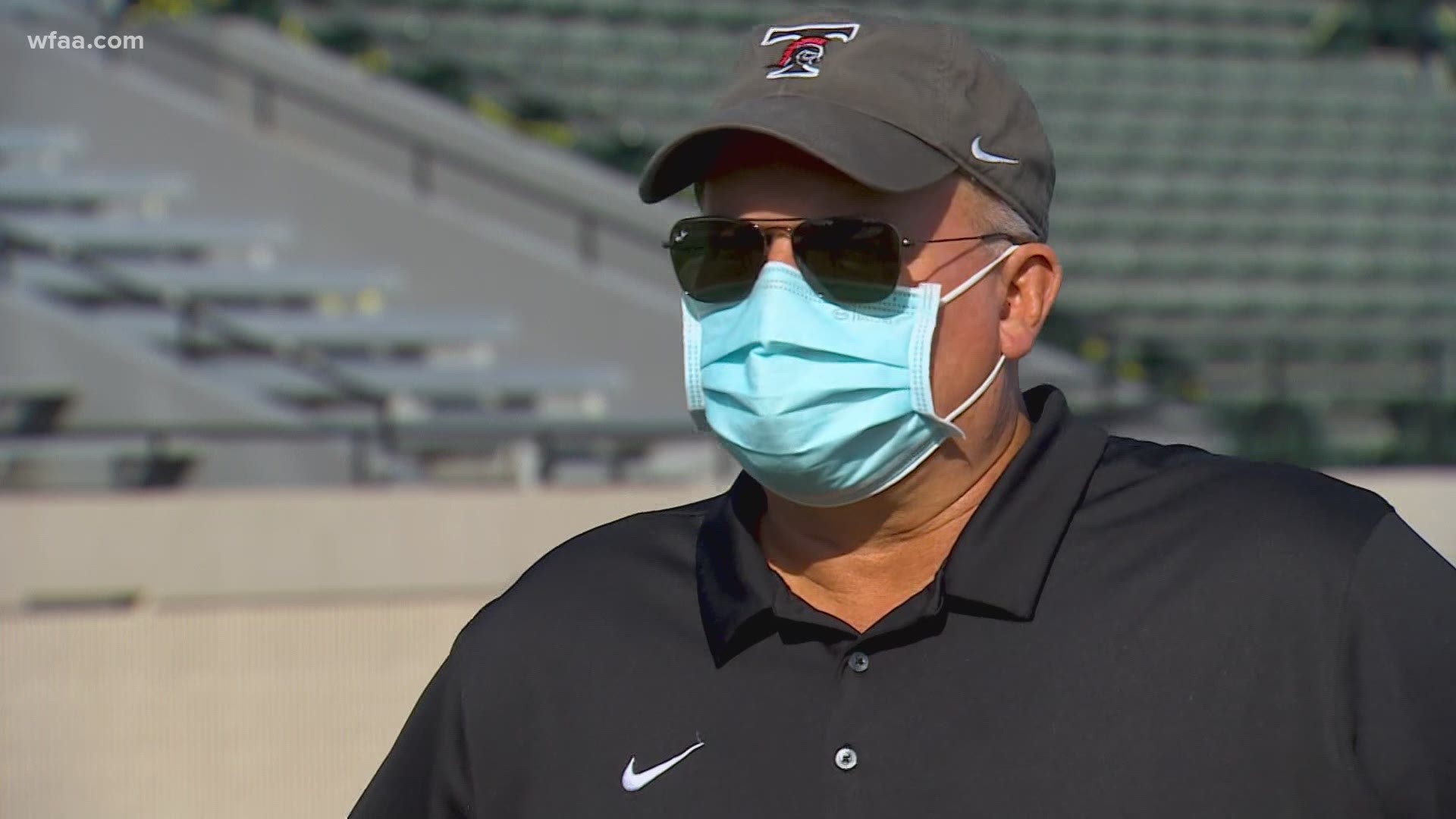 EULESS, Texas — The Friday night lights are still glowing in North Texas, but in some pockets of our communities, silence has taken over stadiums.

Over the past two weeks, at least 46 games have been canceled or postponed due to COVID-19 concerns.

The increasing number of games being called off is coinciding with the start of games for 6A and 5A schools.

The University Interscholastic League delayed the start of games for those schools due to their larger student populations and the likelihood that COVID-19 cases may be higher in their area.

The tally, first reported by the Dallas Morning News, is a harsh reality for coaches practicing one of Texas' most beloved religions.

RELATED: Allen vs. Cedar Hill latest high school football game to be canceled due to COVID-19

In the back of Chris Jensen's mind, he's not just preparing for an opponent but the fallout of a positive COVID-19 test.

Jensen is the head coach of the Euless Trinity High School football team. His matchup against Colleyville Heritage High School Friday night was stopped in its tracks due to COVID-19.

"The head coach called me last Wednesday and said they had some health issues with their varsity team," Jensen said. "It's starting to become more common for cancellations."

For Trinity, it's not a huge headache. The matchup was non-district, so the only thing the team lost was overall experience for the remainder of the season.

But Jensen didn't want to sit around. To him, that experience matters.

He tried to find another school in the same boat, one facing a cancellation but also eligible to play.

That search is becoming a popular "plan B" for schools like Trinity this week.

The UIL hasn't provided specific guidelines on how to resolve or handle cancellations. It's leaving those decisions up to district executive committees.

But Jensen, even with a week of lead time, couldn't find another opponent to play.

"So many of the cancellations are happening close to game time," Jensen said. "We don't just roll out a ball and play. A lot of preparation goes into these games."

Instead, Jensen treated this week as a bye, but he worries what impact the virus will have on district play.

Alongside that concern are players still hunting for college scholarships, and senior players who won't have a storied memory of a final season like so many others in Texas have had.

RELATED: 'I feel like everything is on the line': Pandemic a hurdle for high school athletes seeking scholarships

"It could get really messy with district play. We may have to turn around and play two games in one week," said Jensen.

Jensen also said matchups within the district could get changed last minute on a dime if two games were canceled and at least two teams were still eligible to play.

"We're just going to figure it out as we go," said Jensen.

In the meantime, Jensen is trying to keep his kids healthy. Time together inside, like studying film, is limited to less than 15 minutes.

Segments of practice are watched closely and athletes are required to wear masks.

All Jensen wants to do, is make it to Friday night every week.

"It's a victory, regardless of the outcome, that we get to line up and play. We tell the kids every week to prepare like this is the last game of the year...because it very well could be," he said.

The UIL said this week that it will be a resource to schools to help with scheduling issues and that it is constantly working with local and state officials to determine if modifications to the season should happen.