Inside Texas Politics: Speaker Bonnen says, 'not wearing a mask is keeping businesses from being fully open'

Texas House Speaker Dennis Bonnen said Texans need to get back to the basics in preventing the coronavirus – social distancing, wearing face masks and washing hands. 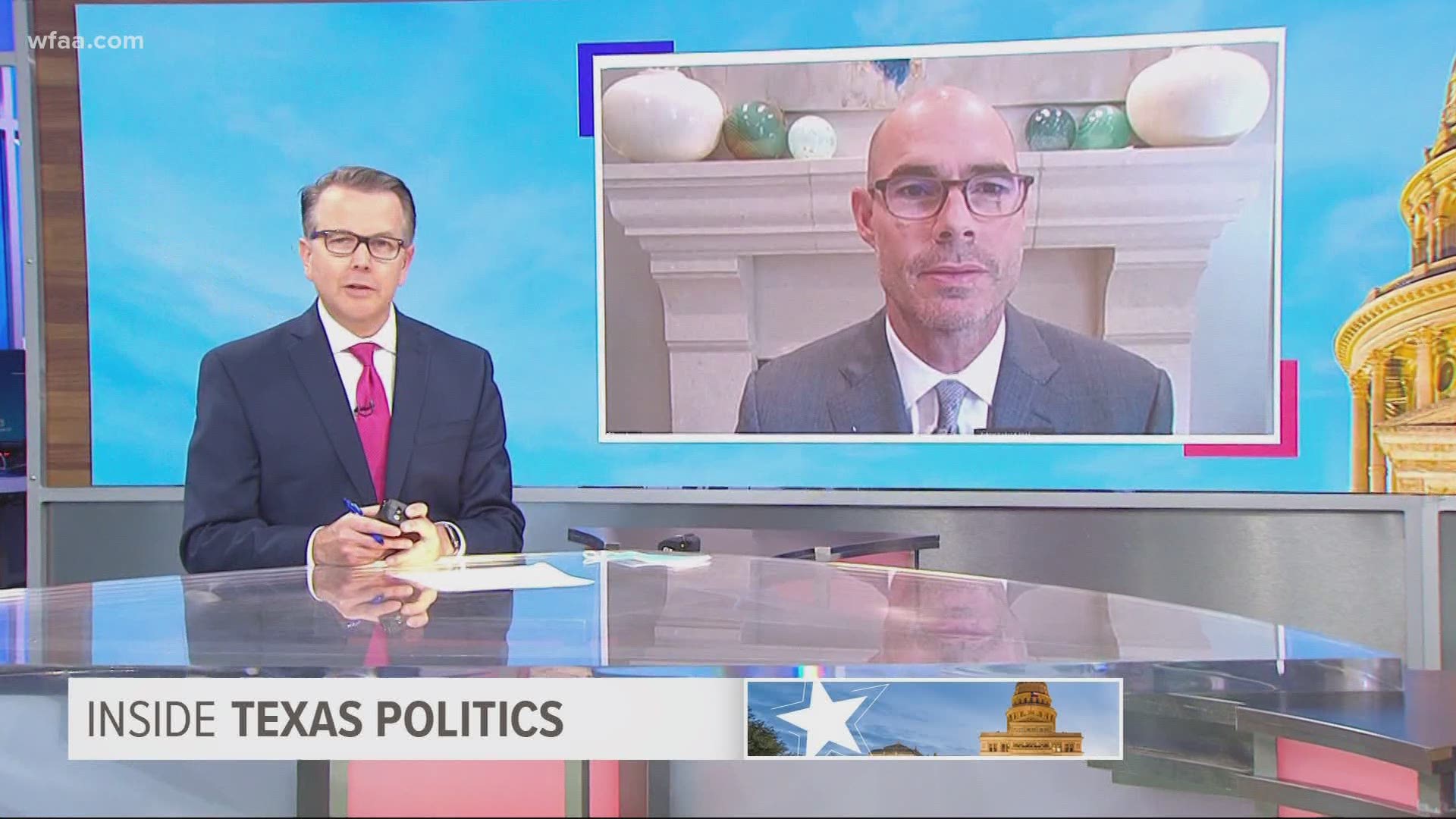 A partisan debate is raging over face masks. Some conservatives say it should be an individual’s choice and anything else is government overreach.

But that doesn't mean they all think face masks are important. Texas House Speaker Dennis Bonnen (R-District 25) says now that cases have surged across the state, it's up to Texans to make sure things get better, not worse.

Bonnen doesn't believe the state opened too early. He said issues with Memorial weekend gatherings, protests and socializing in bars have led to the current high case count.

“Texans have proved we know how to live and work and have an economy around COVID-19,” Bonnen said.

But, he said, Texans need to get back to the basics when it comes to the coronavirus – follow social distancing guidelines, wearing face masks in public and washing their hands.

“If we get back to doing those things, we can do this and have an economy,” he said.

While Bonnen does believe masks are important for stopping the spread of the virus, he believes the governor is managing the issue correctly.

“We still have parts of the state that have fewer than five cases in their county,” said Bonnen. “The reality of it is, the population we’re really wanting to reach on wearing a mask, don’t want to be told what to do.”

Bonnen said “it’s bizarre” that the same people who want the economy to be open, don’t want to wear a mask.

“Not wearing a mask is keeping businesses from being fully open,” he said.

He added that the lack of mask-wearing is actually keeping “our friends and neighbors” from entering businesses because they’re afraid for their health.

People who won’t wear masks are “working against their own interests,” said Bonnen.

Despite the significant jump in cases and hospitalizations, Bonnen said school will start on time, thanks to the Texas Education Association and school districts working to ensure high-quality virtual learning can take place.

“It may not start with your child in the classroom,” said Bonnen. “That will be the decision of your local school district.”

Bonnen said despite the fact that some of his followers feel differently, he’s the same politician he’s always been.

“I’m a free market, conservative Republican who wants to economy vibrant,” he said, “and I’m smart enough to understand that my life is not so small and so little that I gain something by refusing to wear a face covering that allows businesses to stay open.”

It is those beliefs and values, Bonnen said, that motivates him to wear a face mask and follow other health and safety protocols for COVID-19.

Bonnen said the government hasn’t shut any houses of worship down during the pandemic, but some church leaders have felt it’s unsafe to remain open.

What will police reform look like in the U.S.?

Protesters and polls have made it clear Americans want police reform, but Democrats and Republicans differ on what needs to happen.

Congressman Al Green, D – Houston, says it’s a possibility that something will pass through Congress in relation to police reform.

“The question is, will we do something that’s transformative,” said Green, “because that’s what I believe the country is asking for.”

Green said any legislation that goes through should define a new era in policing in the U.S.

The issues at question: body cameras, no knees on necks when subduing someone, and the ending of no-knock laws.

Green said he hopes both sides could come to terms on these issues.

Most importantly, “it’s time to mandate,” said Green, which is what sets the House bill apart from the one that passed through the Senate.

The secretary of reconciliation would be charged with eliminating discrimination in the U.S.

“In a perfect world, reconciliation would mean that when you’re policing all persons would be treated equally,” said Green. “You wouldn’t have institutionalized discrimination within a police department.”

This department could also look at issues like bank lending, home sales and more. And, Green said, it would focus on more than Black Americans, since there are other groups that have been discriminated against.

“It just means we wouldn’t have racial equity for all the people in this country,” said Green.

Gov. Greg Abbott enacted further restrictions on Friday across the state – shutting down bars for in-person service and tubing and rafting businesses, and reducing restaurant capacity to 50%.

Judge Clay Jenkins said community members need to be smart about what restaurants they frequent with the current surge.

Jenkins also cautioned against visiting any place where people might not be wearing masks – such as gyms.

He is among a group of local leaders who say the governor hasn’t yet gone far enough.

He said he believes Texas should go back to takeout and delivery for food service.

Jenkins says he’s asked Abbott to set up conversations between him and the health leaders in some of the counties hit hardest by COVID-19. He wants Abbott to hear advice from people on the front lines.

Jenkins also said the “recommendations” in the Open Texas plan need to be requirements instead.