Inside Texas Politics: Do Democrats have a plan for the second special session?

On Inside Texas Politics this week, host Teresa Woodard talked with two Texas Democrats about their efforts to kill the GOP election bill. 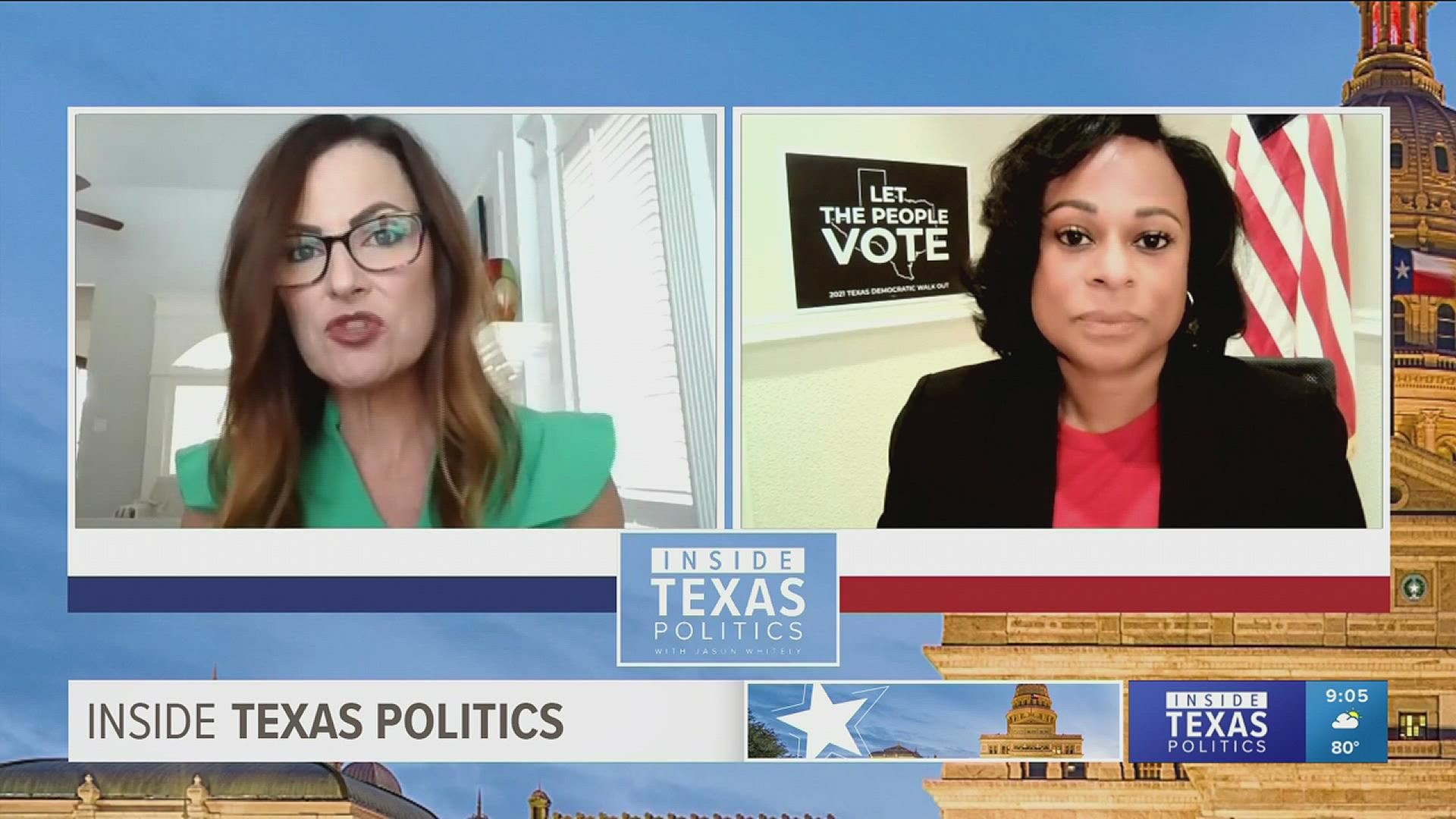 On Inside Texas Politics this week, host Teresa Woodard, filling in for Jason Whitely, talked with two Texas Democrats about their efforts to kill the GOP election bill and the upcoming second special session.

On the national level, Rep. Marc Veasey shared how Texas could benefit from the massive infrastructure deal. And in state news, Texas Tribune executive editor Ross Ramsey discussed the latest COVID-19 surge and their reporting on money from the energy industry flowing to Gov. Greg Abbott.

When they first left town hours into the first special session, Texas Democrats had two major goals: kill the GOP election bill they argued amounted to voter suppression and kickstart movement on federal voting legislation that would supersede any state legislation. While the election bill will be revisited during the second special session, a North Texas Democrat says they fully met their other goal.

“Three and a half weeks ago when we got to Washington D.C. the ‘For the People Act’ and ‘The John Lewis Voting Rights Act,’ they were not at the forefront. But now that's what we're all talking about,” Rep. Nicole Collier said on Inside Texas Politics. “So, there has been movement and progress and making sure that protecting the freedom to vote is in everyone's mind.”

As for the GOP election bill, Collier also points out that Republicans have made changes to it since Democrats fled town.

But one of the bills that died when Democrats initially walked out of the House in the closing hours of the regular session is now gaining more attention. That legislation would have provided funding for districts that decided to provide virtual learning options for students during the 2021-2022 school year. It was an abstract concept during the summer while families were taking a break and catching their breath after an extraordinarily difficult school year. But now that school is starting again and many districts aren’t providing virtual learning because of the cost, it’s become a very real issue for many parents.

Collier says Republicans have the power in Austin, so blame them for not passing priority legislation such as this and instead focusing on bills to placate their base.

“The majority party of the Republicans, they hold the Calendars Committee. They have the gavel at the front. So, if that was a priority of the Republican-led legislature, it would have passed. So, we did our part as Democrats for voting and promoting these bills,” she said.

Collier also says she’s not worried about burned bridges between Democrats and Republicans in Austin. They may exist, she says. It’s just not her main concern.

“If they take it personally, that’s on them. I’m not taking this personally. When I've been attacked, my name has been drug through the mud plenty of times. But I know what my constituents elected me to do and I'm going to keep doing that,” Collier said.

No clear plan yet for Dems in 2nd Special Session

Nervous families, COVID raging, school starting back up -- all will be pressing issues in the coming weeks.

Does he support Gov. Abbott’s ban on mask mandates in schools? Why not just allow local districts/boards decide what’s best for their individual communities?

RELATED: 'We must remain vigilant' | Houston ISD to vote on mask mandate for students, staff and visitors

In terms of the Critical Race Theory debate moving forward and whether that teaching philosophy should be banned from Texas schools, Huberty says he’s keeping an open mind.

“Candidly, I am concerned. I don’t want us to go too far about erasing history… that is a big concern to me,” he said. “We should be learning from our history. That’s what history exists for is that we need to learn from it. We need to understand what it was and not repeat the same mistakes of the past.”

The trillion-dollar infrastructure deal appears to be on the verge of reality with a vote for final passage in the U.S. Senate possibly as early as the week of Aug. 9. And Texas stands to benefit from the largest such package in decades.

Congressman Marc Veasey, whose district covers parts of Dallas and Fort Worth, says DART is an example of an organization that could be enhanced by the legislation. Even Fort Worth, which he says doesn’t have a lot of light rail capacity, would benefit because it could expand.

“There’s been a lot of talk, for instance, about things like high speed rail in this country. And the fact that other parts of the world like China are outpacing us in that area. We want to make sure that we also have that technology and a lot of that would, obviously, take place here,” Rep. Veasey said on Inside Texas Politics.

The Democrat also says companies should be able to require COVID-19 vaccinations for its workers. Rep. Veasey says he will require it in his own office, unless there is a religious or health objection.

“Everybody has to do their part. Everyone has to get vaccinated. And the people who aren’t getting vaccinated are hurting the rest of us,” he said.

COVID-19 continues to surge in Texas

Ross Ramsey, the co-founder and executive editor of the Texas Tribune, joined Inside Texas Politics to discuss the surge of COVID-19 cases across Texas.

The Dallas-Fort Worth region has passed its hospitalization peak from the summer of 2020. The latest number from the DFW Hospital Council showed 1, 979 people hospitalized with COVID-19 in North Texas.

Last summer, that number never got over 1,965. Texas hospitals are getting overwhelmed, again, and the governor is standing firm - no masks or restrictions. Is that a risky move for him?