The governor's agenda includes controversial election legislation, as well as restrictions for how schools can handle COVID-19. 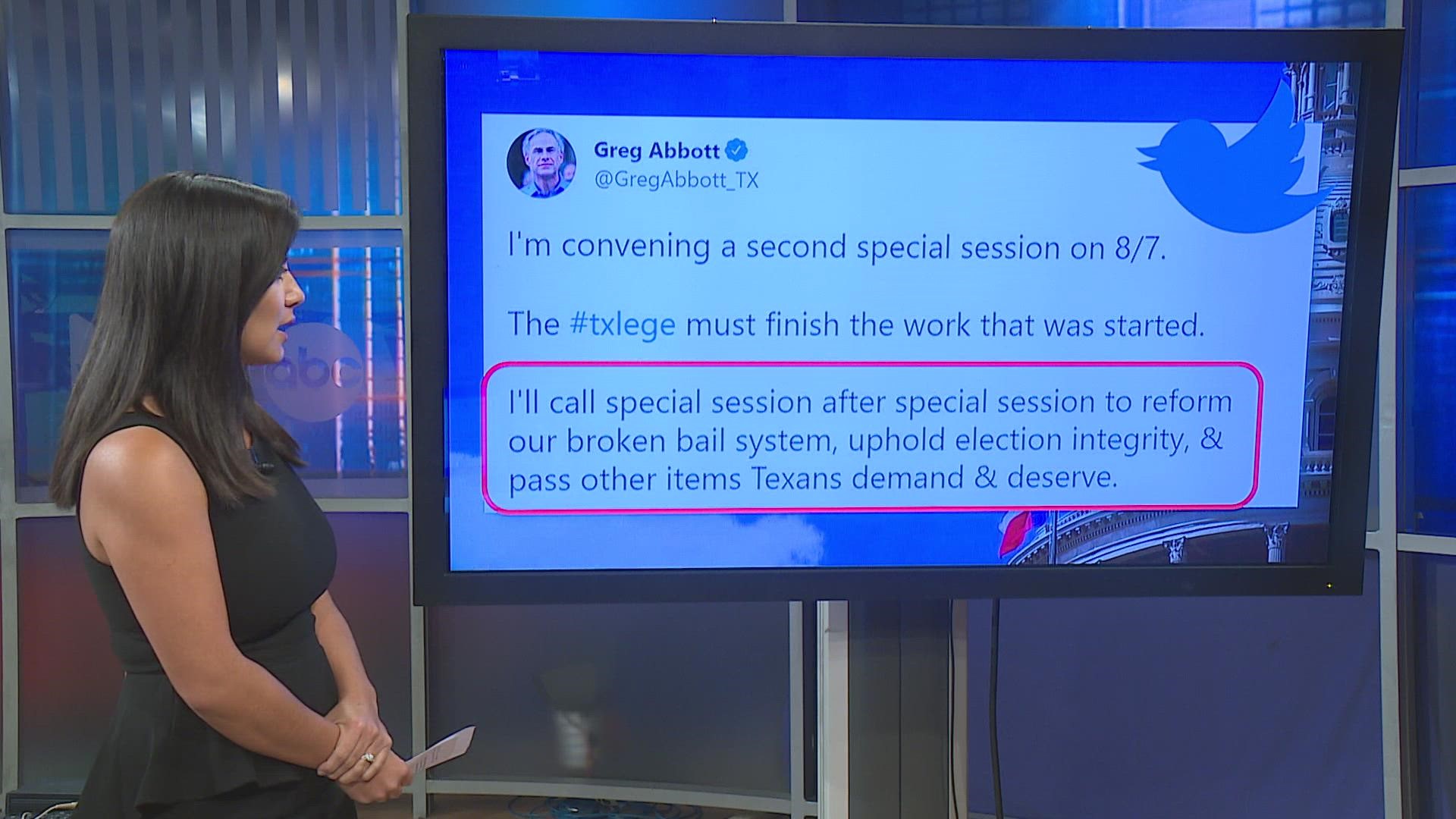 DALLAS — Editor's note: The video above is from June 25.

State lawmakers will have to reconvene in Austin a second time on Saturday, Aug. 7 for a new special legislative session, Gov. Greg Abbott announced Thursday.

While many of the items on the agenda for the second special session mirror the first, there are some add-ons that could be potentially significant.

Starting at noon Saturday at the Texas State Capitol in Austin, lawmakers will meet about a number of legislative items, per a news release from the governor's office. Eleven of those items were included in the first session's agenda, while there are six new items the governor added onto the second special session.

The new items include:

Only legislative items that the governor puts on the agenda can be discussed during a special session.

A special session in Texas can last no more than 30 days, but it can be shorter.

If the governor is not satisfied with the outcome of this special session, or if he wants lawmakers to focus on additional topics, he can call additional sessions – as many as he wants.

This will be the second special session he has called this summer.

“It also gives him a lot of responsibility,” Scott Braddock, editor of the Quorum Report, said earlier this year around the time the first special session was called on WFAA’s Y’all-itics podcast.

“Texans hold the governor accountable for what happens in a special session. It costs about $1 million in tax dollars for that 30-day period,” Braddock said.

The first session, which started on July 8, came to a standstill when Democratic state representatives fled Texas to prevent the House from reaching a quorum.

The main fight then was over the "election integrity" item. Democrats argue Republicans are pushing election bills that are too restrictive and will disenfranchise Texas voters, while Republicans believe reforms are needed for additional election security.

A deputy of former Texas Secretary of State Ruth Hughs, the state's chief election officer, told lawmakers earlier this year that “Texas had an election that was smooth and secure" in 2020, the Texas Tribune reported.

Republican-backed Senate Bill 7 failed in the final hours of the regular session when House Democrats walked out off the floor, breaking quorum to prevent a vote.

“We defended our constituents by blocking a vote on that bill,” State Rep. Chris Turner (D- Arlington) and chair of the House Democratic Caucus said in May.

“It really is about accessibility and security. They’re both important and that’s what the bill is about,” said the bill’s sponsor State Sen. Bryan Hughes (R-Mineola).

A bill allocating funds for virtual learning options in the state also failed because of that, and the topic is not listed among the agenda items for the second special session.