During a news conference Wednesday afternoon, Abbott and other state leaders signed a letter that provides $250 million to be allocated as a 'down payment.' 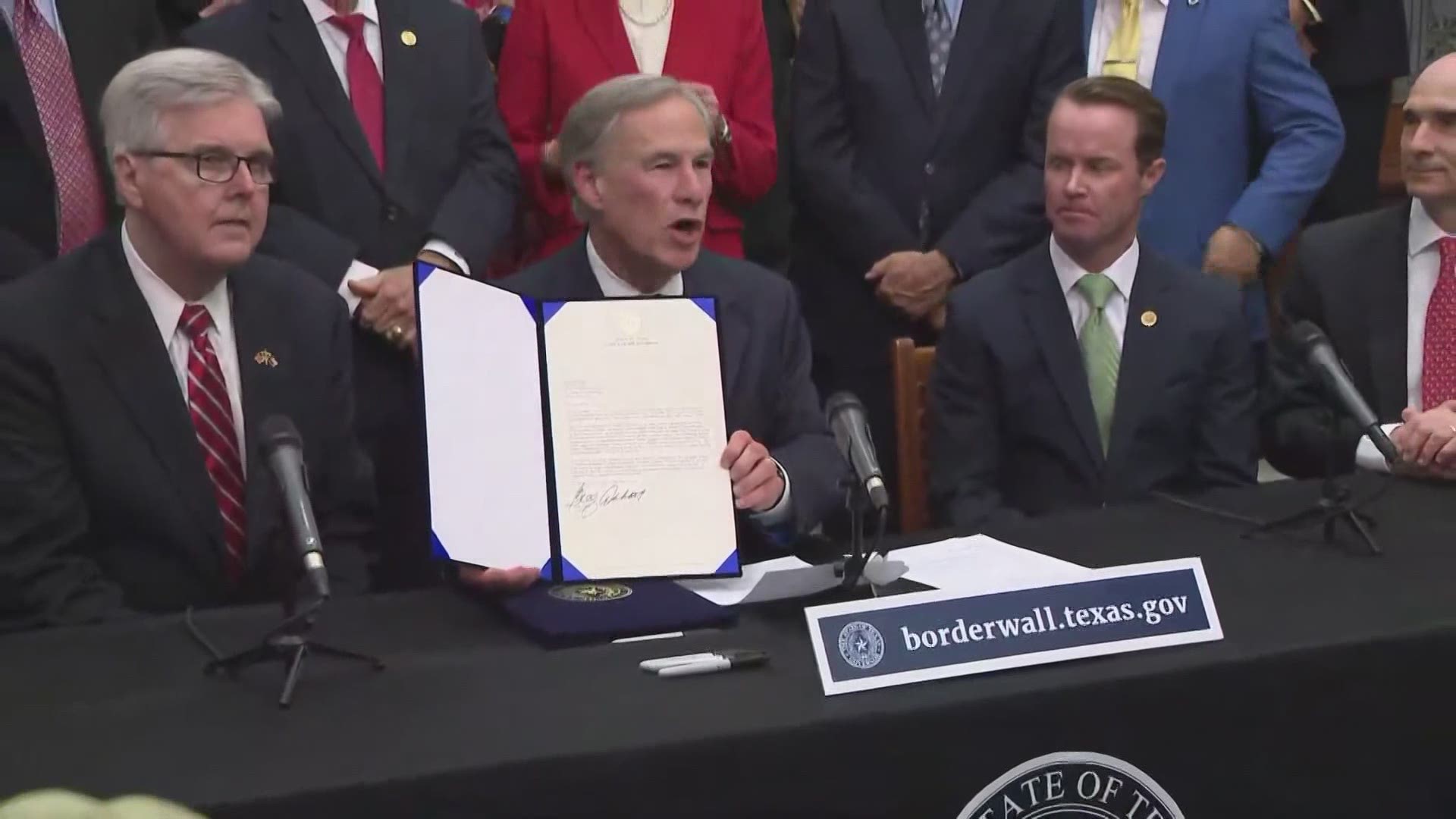 AUSTIN, Texas — This story will be updated throughout the day as new information is released.

Gov. Greg Abbott outlined more details on his recently-announced plans to build a so-called border wall on the boundary between Texas and Mexico, including an allocation of $250 million and a new website where people can donate.

During a news conference Wednesday afternoon, Abbott and other state leaders signed a letter that provides $250 million to be allocated as a "down payment for the beginning of a border wall" and orders the Texas Facilities Commission to hire a program manager for the border wall. That program manager will then get a cost estimate and hire contractors.

The $250 million in funds is being moved from the correctional security budget of the Texas Department of Criminal Justice, which manages offenders in state prisons, state jails, and private correctional facilities. That's about a 10% budget cut, according to budget documents.

In a letter to the TDJC Executive Director Bryan Collier, Abbott says "we pledge to find additional funding as soon as possible to ensure that no program at TDJC will be negatively affected by this transfer.

"We are committed to adding more resources as needed [for the wall]," Abbott said. "This program is officially funded in the state of Texas."

When asked why the state is putting a down payment for something when the final cost is unknown, Abbott said at the news conference, "We are smart enough to hire the experts to go do their job before a further allocation of money."

In a podcast interview released Tuesday, Abbott said that the state would be soliciting donations to help fund the wall. During the news conference, the governor announced a government website where people can donate to the border wall.

President Trump built 52 miles of border wall while in office costing as much as $46 million per mile. Former Trump advisor Steve Bannon and 3 others are charged with fraud in an identical border wall fundraising effort that raised $25 million dollars.

The briefing comes on the heels of Abbott's announcement during a press conference last week in Del Rio, which included various representatives from around Texas as the governor discussed the latest initiatives to "secure the southern border and address the ongoing humanitarian crisis."

“It was kind of theater of the political absurd. Governor Abbott knows he has no authority legally or morally to build a wall on the border," Garcia said. “Most of the children who are coming across at the border are turning themselves in at the bridge, asking for asylum and asking for a court date. No wall is going to stop them.”

Abbott also announced plans to increase arrests along the border.

"They don't want to come to across the state of Texas anymore because it's not what they were expecting," Abbott said before being met with applause from those at the conference. "It's not the red carpet that the federal administration rolled out to them."

Abbott's action on the border follows after the Biden administration issued a proclamation that stopped border wall construction on his first day of office. It also comes as the Texas governor mounts a re-election campaign for office. Earlier this month, Trump backed Abbott for reelection in the 2022 Texas gubernatorial election.

Vinny Minchillo is a Republican media consultant with Glass House Strategy and believes the announcement is Abbott campaigning.

“If you are a very conservative base voter in the state of Texas, that’s who he’s talking to today and nobody else," Minchillo said

Building a wall along the Texas-Mexico border was a key element of former President Donald Trump's successful 2016 election campaign plan that can be dated to when he was preparing his bid for a Republican nomination in 2014. His promise that Mexico would pay for it remained unfulfilled for the entirety of his administration.

With Biden ending that project, Abbott said on Wednesday he is "demanding" that the federal government returns land that was allocated for the border wall, though that project was started under Trump.