Timberview High School parent describes FaceTimeing son as shooting was happening: 'He was so calm'

Dre Dillard's son is a junior at Timberview. WFAA's Scoop Jefferson spoke to Dillard as she waited to be reunited with her son Wednesday. 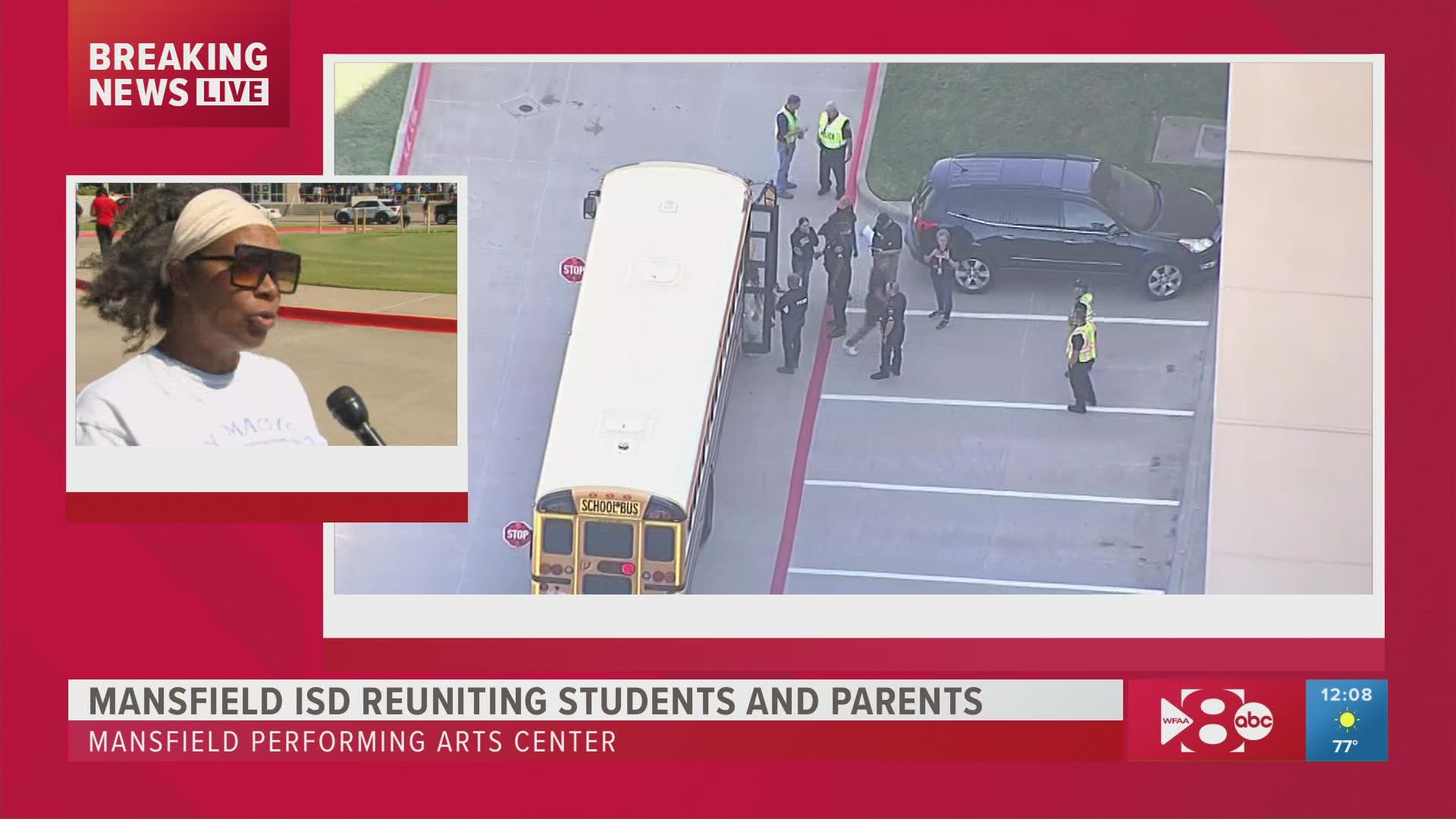 ARLINGTON, Texas — Mansfield ISD parents are reuniting with their kids Wednesday afternoon after the campus was evacuated due to a school shooting at Timberview High School.

Four people were injured in the shooting, police said. The suspect is in custody and he will be charged with three counts of aggravated assault with a gun, police said.

All students have been safely evacuated from Timberview High School. The school has been given the "all clear." There is no threat to the public.

No parent wants to learn that their child is in danger because of a school shooting. Many parents were anxiously waiting to see their children outside the Mansfield Center for Performing Arts, while others were at the school waiting to find out what happened.

Dre Dillard's son is a junior at Timberview. WFAA's Scoop Jefferson spoke to Dillard as she waited to be reunited with her son Wednesday. She talked about how she found out about the shooting, what her plans were with her son in the event of a school shooting, and what happens next.

"It actually wasn’t a call, it was a text from my son, and I’m like, ‘Wait, what?’ because we live like maybe five minutes away from the school," Dillard recounted. "I’m rushing to get to Timberview, and I’m on 360, and then all of a sudden, I had to pull over because it just- it seemed like 100 cop cars were just going to the school.

Dillard said she parked on the side of 360 and was FaceTiming her son, and "he was so calm," she described.

"He told me that his room was right next to the classroom that had the shooting," she recounted.

Dillard said she tried to run toward the school, but the police directed her a different way. She ended up parking by the fieldhouse, she said, but remained in contact with her son every five minutes.

"I started FaceTiming him because I wanted other parents to know that I’m close to the school, I can see what’s going on, some of the children were coming out," she said.

Dillard applauded the work of the Mansfield and Arlington police departments, saying they were "out in droves" trying to keep the situation calm, but added that it was still rattling to know that the shooting even happened.

"My view - and this is my view - is that I feel that there needs to be some kind of security, a tight security," she said. "And I’m not saying that Timberview failed, but that child got through. I don’t know if he was a student in the class, I don’t think he was. But he got through. We can’t have that."

While Dillard said "no one woke up this morning thinking that this was going to happen," she said she and her son had previously made plans about what to do during a school shooting.

"He immediately let me know, and he was so calm about it — I’m the one that was going crazy," she said. "But, I’ve prepared him, and he did it. He did it. He’s still calm. And to know that the shooting was right next to his class…bullets fly everywhere, you know what I’m saying?"

She said she feels bad for the students and staff who have to go through this.

Dillard said that going forward, she believes that talking about today will ensure kids will start to have normal experiences at school again.

"All of these children need counseling. After this, the parents, the children, the staff…especially these kids."

1 / 21
Provided by parent
Students sit inside a classroom of Timberview High School near Arlington on Wednesday, Oct. 6 after a suspect opened fire inside the building. Four people were hurt in total. The suspect, a student, was later arrested.

And, as for her son?

"Well, he’s on the football team, and the coach said that he’s going to try to get the team together today and I will make sure that my son is there. We’re going to start today. I’m not waiting, I don’t think any parent should wait. Because I see kids around, and some of these children are really hurting, and they need to talk.

"I don’t know, I just want to hug and love on my son, period. I can't wait to hug my son, because somebody is not going to be able to do that today."