Texas ranks 4th in anti-Asian incidents; how to stop the hate

Asian-Americans were targeted in nearly 3,800 hate incidents in the past year. Texas was ranked 4th highest with 103 cases, according to Stop AAPI Hate. 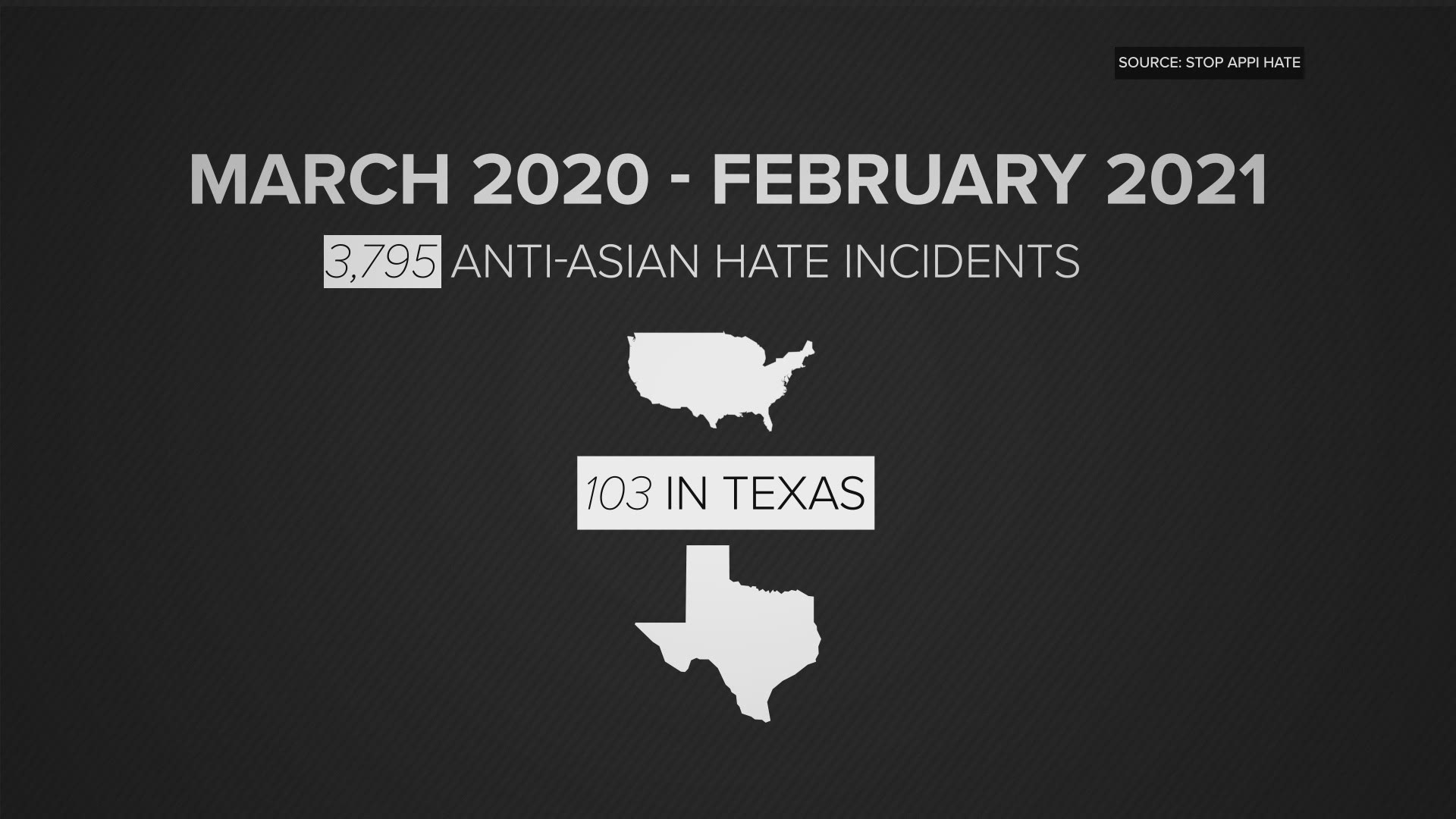 DALLAS — Racism is nothing new, but until recently there were rarely headlines about discrimination against Asians in America.

Since the pandemic started, there have been several incidents of Asians across the country being attacked, threatened and blamed for the coronavirus. That includes in Texas.

In San Antonio, an Asian restaurant was graffitied. "Go back 2 China" was written on the wood. The words "Kung Flu" were sprayed on the windows.

In Dallas, a Dallas Stars employee was fired for writing a message on the Nextdoor app that promoted violence against Chinese people.

In Midland, an Asian American family was stabbed at a Sam's Club. It left a father and his two sons hospitalized. The FBI confirmed it was a hate crime, saying the suspect thought the family was Chinese, infecting people with coronavirus.

According to Stop AAPI Hate, between March 2020 and February 2021, more than 3,795 incidents of Anti-Asian hate were recorded. At least 103 of those incidents were in Texas.

Dr. Jeung said, "There's been a surge of racism. There's been an increase in hate crimes and overall blatant racism and racist policies."

Lang Nguyen, an Army veteran, said he was waiting in line to vote in Irving in 2020 when he took a sip of water and choked. The woman in front of him turned around.

"She was saying all of you guys are spreading that corona around. I don't want it," said Lang.

He said another person behind him stood up for him.

After Lang voted, he went outside to thank to the good Samaritan when he saw a police car pull up.

"It looked like it was in a rush. He goes inside, rushes by us, comes back out toward me and he starts asking me for identification. I'm just like, for what? Are you serious?" said Lang.

Lang said he told the officer the woman made racist remarks to him before calling the police. He said the officer ended up defending him too.

"It feels like a lot lately, where we should be calling ourselves the divided states of America," said Lang.

Throughout his life, he's experienced acts of microaggression and verbal discrimination, but since the pandemic started, Lang said the abuse is influenced by the rhetoric around COVID-19.

RELATED: D-FW man is home after spending months of the COVID-19 pandemic in Wuhan, China

Holly Nguyen is the owner of OMG Tacos in Richardson. It's an Asian-owned restaurant with a diverse staff. In the beginning of the pandemic, she took a stand against hate.

"A few customers came by and they made comments. They asked other team members, 'Are you worried because you work with them?', and kind of just implying Asian people have COVID," said Nguyen.

She turned those customers away and pledged on social media to ban racist and ignorant people from her restaurant.

She said the xenophobia against Asians often feels dismissed.

"A lot of people don't hear about it because nobody talks about it," said Nguyen.

Even Asian Americans in authority feel the hate.

Senior Corporal Soo Nam has been with the Dallas Police Department for 11 years. He was born in Korea and moved to Texas as a child.

As a police officer, he said, "Going out, answering calls, there will be times when I deal with suspects or citizens that call me names, racial slurs."

Nam said he doesn't let that bother him. Instead, he keeps himself engaged with the Asian communities in Dallas to help others protect themselves from becoming victims. He is assigned to the Asian Community Outreach Unit with Dallas Police.

Nam understands there may be a language barrier, fear of police or fear of retaliation. It's why he says there is a big problem with underreporting when it comes to hate incidents. His job is to bridge the gap, and improve police-community relations.

So how can you help combat Anti-Asian racism and violence?

The first step is to report hate incidents and hate crimes to local law enforcement, and also to community organizations that are collecting data and advocating for policy change. Stop AAPI Hate is one of those organizations.

You can also educate yourself and those around you. Many resources are offered by different organizations, including the Asian American Journalists Association or Hate Is A Virus.

Also, speak with your local and state elected officials and leaders to pass anti-hate legislation. There are several community organizations throughout Texas who are working to bring change, including the DFW Chinese Alliance, the Greater Dallas Asian American Chamber of Commerce, the Asian Chamber of Commerce Houston, or NAFSA: Association of International Educators.