Video shared from a viewer captured the blare of the alarms as people used the walkways to exit the mall in the panic. 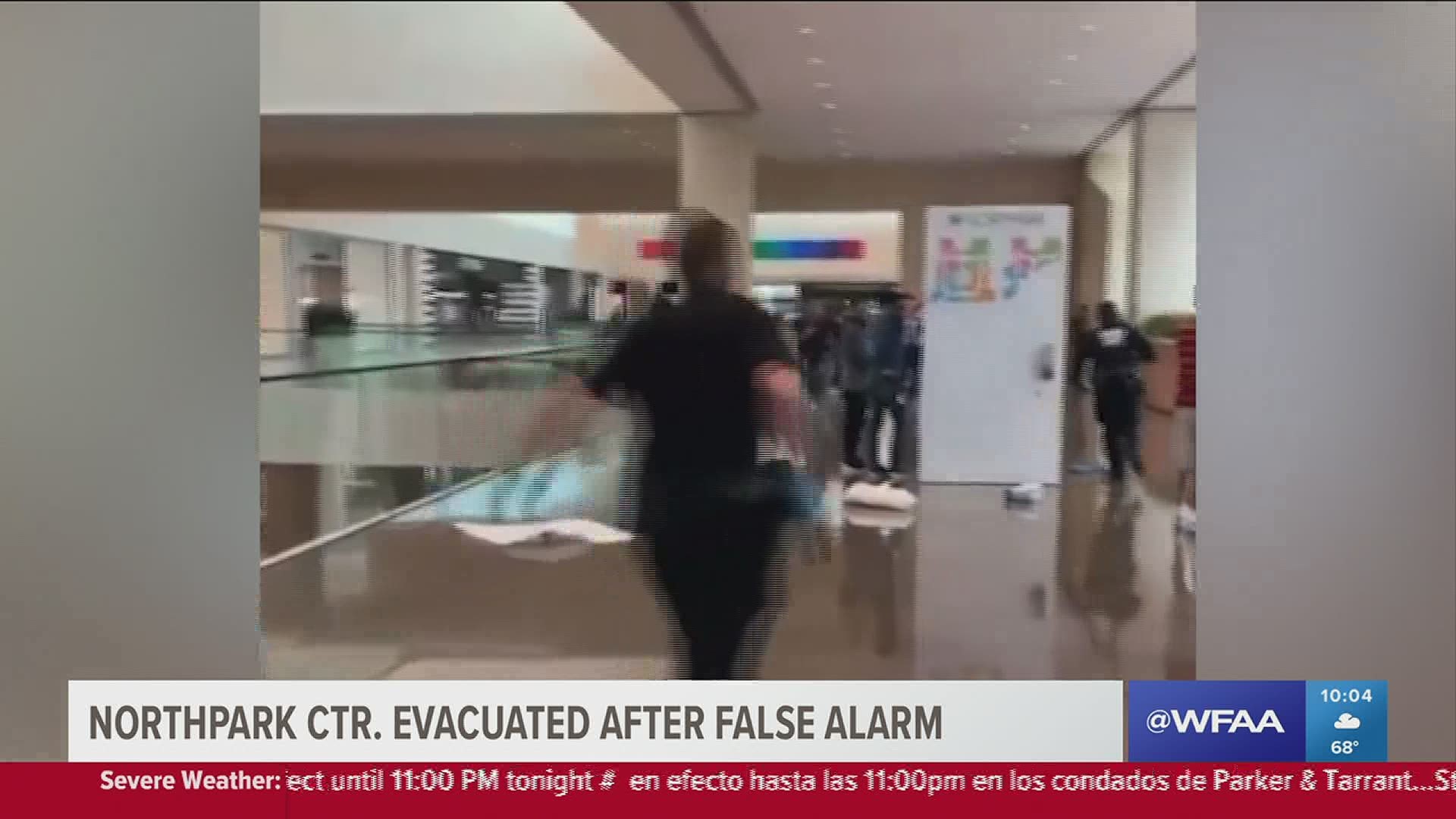 DALLAS — Dallas police said the sounds of gunfire at NorthPark Center on Memorial Day actually turned out to be the sound of a skateboard being banged into the ground by a "mentally disturbed individual."

The sounds sent shoppers into a panic, as they rushed to safety. Police said in a tweet that one person, a 25-year-old, is in custody. No one was hurt, according to police, though one person was complaining of chest pains.

Garcia said the person with the skateboard was in the food court when they began pounding the board into the ground - sending hundreds of people rushing for the exits, thinking that a shooting was happening. As people were heading for safety, Garcia said the person started making hand gestures as if he was shooting into the crowd, "further escalating" the situation.

Garcia said off-duty officers got to the person by 1:30 p.m., with other Dallas officers getting on scene at 1:31 p.m. The person was arrested quickly after, and taken to a hospital for a medical evaluation. No weapons were found, and no actual shots were fired, either, they determined. Police are still working to determine what charges the person might face.

WFAA's Malini Basu spoke to one restaurant employee who was working in the food court area at the time, before they had to exit the mall.

“I was hiding in the bathroom for 10 minutes,” he said.

Another shopper said they were in the food court when they heard loud banging before alarms started going off.

"Everybody was rushing to get out the door," he told WFAA. "People were pushing as they were trying to get out."

Former veteran just described to us what he saw inside NorthPark Center.

As of right now, we’re still seeing dozens of people coming out. Everyone is visibly shaken. @wfaa pic.twitter.com/2m0Z5vTkZy

Video shared from a viewer captured the blare of the alarms as people used the walkways to exit the mall. Other video showed people running away from the mall.

"Obviously with the country - particularly what it is right now - there's a lot of trauma. I don't blame these individuals one bit. This is what's occurring right now," Garcia said, presumably referring to the recent string of deadly mass shootings in public spaces since the start of the year.

"This is something every law enforcement agency in America needs to be prepared for," Garcia said, adding that what happened is "not a joke" and police plan to prosecute to the extent that they can.

Mostly, Garcia said, he felt fortunate that the situation turned out to not be an active shooter and no one else was hurt in the rush to safety.

"People could have gotten seriously injury," he said.