'A solid wall of 15-foot flames all night long': What to know about the Poly-America factory fire in Grand Prairie

A massive fire that broke out at the Poly-America factory in Grand Prairie around midnight Wednesday morning was contained and reduced around 4 p.m. 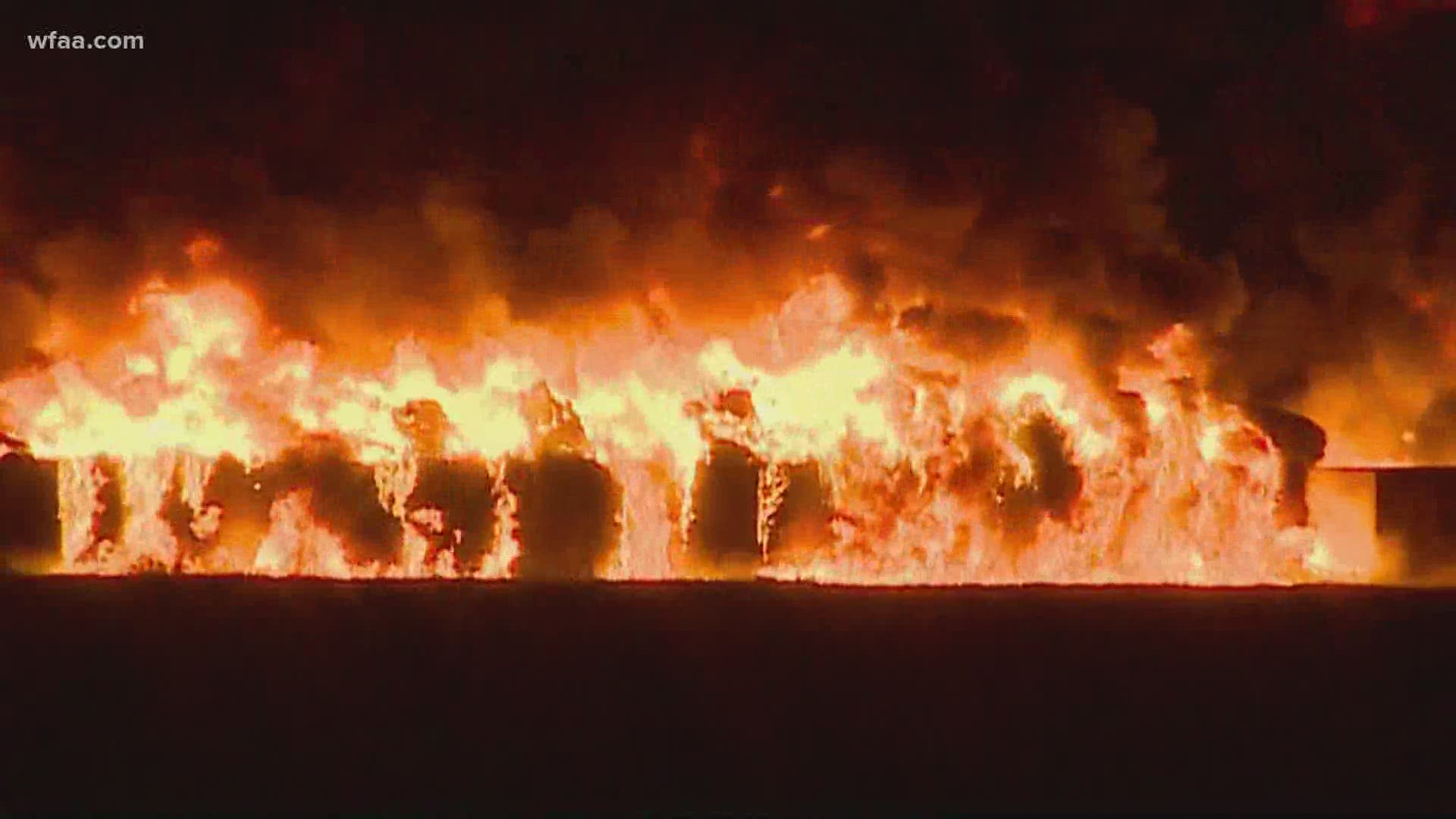 GRAND PRAIRIE, Texas — This story has been thoroughly updated.

A massive fire that broke out at the Poly-America factory in Grand Prairie around midnight Wednesday morning was contained and reduced around 4 p.m. Officials say the fire should be extinguished by Wednesday night.

Firefighters will continue working Thursday to extinguish any hot spots that pop up, officials said.

Fire officials initially said the blaze in the area of 2000 W. Marshall Drive could burn for a couple of days as crews worked to extinguish it.

The Grand Prairie Fire Department is working to determine the official cause of the fire. Early Wednesday morning fire officials said they believe the blaze began after a power line from a 60-foot power line tower fell into the plastic inventory below. They think it could have been damaged somehow in Sunday night's storms.

No injuries have been reported, according to officials, but the factory did have a night shift crew present at the time the fire broke out.

Some residents were advised to self-evacuate if they felt in danger, Grand Prairie officials said. They did do a reverse 911 call out to make residents in the area aware, but no official evacuations were declared Wednesday.

"The State of Texas is monitoring the industrial fire in Grand Prairie and working closely with local officials and first responders to address safety concerns in the community," Abbott wrote. "The Texas Commission on Environmental Quality and Grand Prairie officials are continually checking air quality conditions and the State will provide any necessary resources to the area.

"I ask Texans in the Grand Prairie community to heed the guidance of local officials and pray for the safety of the first responders combating the fire."

Grand Prairie, Dallas, Fort Worth and Cedar Hill fire departments were on scene, as well as the DFW Airport foam sprayer.

The Bureau of Alcohol, Tobacco, Firearms and Explosives Dallas Field Division said in a tweet at 12:07 p.m. that an agent was on the scene. Agents from the Environmental Protection Agency were also on-scene.

RELATED: Smoke plume from Grand Prairie fire big enough to be seen on radar, could interfere with DFW flight paths

Many reported that the fire and smoke could be seen for miles. The smoke appeared on a WFAA weather camera in Denton, about 40 miles away from the scene.

Smoke from the fire headed west and is a combustion from plastic, so it is toxic and not healthy to breathe in for people who live in the area, Grand Prairie officials said. Those with respiratory conditions like asthma should avoid the area if possible.

Massive fire breaks out at Poly-America in Grand Prairie

What burned at the Poly-America factory in Grand Prairie?

Headquartered in Grand Prairie, Poly-America produces polyethylene products, including trash bags and plastic sheeting, and recycles and compounds polyethylene, according to its website.

The main issues for emergency crews Wednesday were area logistics and the nature of plastic fires being difficult to put out, officials said.

"We've got it contained somewhat," Assistant Fire Chief Bill Murphy said earlier Wednesday afternoon. "Our biggest problem is this is a lot of plastic, it burns very hot... there's just not enough foam to put on this large of a fire. It's just going to burn."

One of their other obstacles were the train tracks that lie between their units and the building. Rail cars on the tracks caught fire and exploded, Murphy said. At least one was loaded with paint.

"It was a solid wall of 15-foot flames all night long," he explained.

Fork lifts were used to create a fire break and slow the spread of the fire. Murphy explained there was about 300 yards of pelletized plastic on a concrete pad at the site, which will take a large amount of foam to put out.

Fire officials are working out how to keep the scene staffed as they believe their efforts could go well into Thursday to put out the blaze, calling it a likely two-day operation.

"It's gonna burn for a couple days," Murphy said.

The same exact scenario happened 32 years ago, Grand Prairie officials said, and it took a full day for the crews to put out that fire.

The fire is several hundred feet away from the factory building itself, however, and does not pose a risk to the structure, Murphy said.

The line of fire in #GrandPrairie appears to be right where you see the long line in the middle of this satellite image.

There is a train track and power lines along that same stretch.#IAmUp pic.twitter.com/5mvIc9s76J

Sections of West Marshall Drive and Great Southwest Parkway near the factory were shut down Wednesday.

President George Bush Turnpike (Hwy 161) was briefly closed but has since reopened, the fire department said.

The company's headquarters are located at 2000 W. Marshall Drive.

Grand Prairie officials said they had shut down the turnpike as a precaution against power line towers pulling lines down over the roadway. The base of one of them buckled Wednesday.

Oncor told fire crews it's a matter of when, not if, the tower seen in the middle of the fire will come down. When that happens, it could cause a domino effect bringing lines down for half a mile or so, Murphy said.

"We have de-energized and electrically isolated the location and the surrounding transmission towers from the rest of the grid to prevent any further outages," Oncor officials said in a statement earlier Wednesday. "As part of this effort, power has also been rerouted for the immediate surrounding communities, with less than 30 individual outages remaining. Personnel will remain on site to assess any further impacts and continue coordination with first responders, and we will keep you informed of any further updates.”

The smoke began to flow straight upwards Wednesday afternoon, Murphy said, which could cause some flights to be re-routed to DFW Airport. He said the smoke is right in the flight path for the hub.

The smoke is toxic, Murphy said, and they have state and local environmental officials coming in to further evaluate the dangers the fire poses, such as the runoff.

There are also crews taking measurements for air quality across the city this morning as well to monitor levels from the smoke.

Johnson County officials said they are aware the plume has made its way into the northern portion of the county and were told EPA air monitoring is being done closer to the fire.

Murphy advised people to keep their windows shut if in the area and avoid it if possible.