Live updates: Protesters gather in Dallas, Fort Worth on 7th day of protests

Hundreds of people continued to protest in across the Dallas-Fort Worth area as the world responded to the death of George Floyd.

Hundreds of people gathered in demonstrations across the Dallas-Fort Worth area Thursday, where there were scenes of officers and bystanders praying, protesters singing gospel songs and a silent protest -- alongside more demands for change.

It was the 7th day straight for people in Dallas-Fort Worth to demonstrate as the world responded to the death of George Floyd while he was in Minneapolis police custody.

At 1 p.m., Fort Worth police officers took a moment of silence for 8 minutes and 46 seconds -- the amount of time that a now-former Minneapolis officer had his knee on George Floyd's neck.

As temperatures reached into the 90s, the Fort Worth Fire Department rolled out their cooling stations outside city hall for protesters and bystanders looking for some shade.

Later in the afternoon, dozens of people signed up to speak during the public comment forum of Fort Worth's city council meeting.

Many were demanding police policy changes after protesters were teargassed over the weekend while blocking traffic and crossing 7th Street Bridge. Others mentioned that the citywide curfew impeded on their rights to free speech. The curfew ordinance was allowed to expire by council members.

A few hours earlier, about 100 people participated in a silent protest at Dallas City Hall, which kicked off the 7th day of protests across the Dallas-Fort Worth area.

RELATED: North Texas protests, Day 6: Young marchers take to the streets in Fort Worth, while police officers kneel in Dallas

Here are the planned protests and events for Thursday:

1 p.m. Moment of reflection with the Fort Worth Police Department

8:35 p.m.: The Dallas Police Oversight Board announces a hotline for protesters during town hall. The board says if protesters have had any issues with police over the last week they can call 469-701-0349.

The board also said for all matters, including if anyone witnesses what they consider police brutality, call 214-671-8283.

6:37 p.m.: Dallas Police Chief Renee Hall says no charges will be filed against the protesters who were detained on the Margaret Hunt Hill Bridge on Monday.

6:16 p.m.: Hundreds of people are marching in Fort Worth.

4:01 p.m.: The Fort Worth Police Department announced the citywide curfew has expired and has not been renewed.

3:41 p.m.: Dozens of people gathered outside of the Fort Worth City Hall. The fire department has deployed cooling stations.

3:25 p.m.: People gathered at Fort Worth City Hall for the council meeting.

1:37 p.m.: Fort Worth police officers took a moment of reflection for 8 minutes and 46 seconds, the amount of time that now-former Minneapolis police officer Derek Chauvin's knee was pressed on Floyd's neck. Outside the east side substation, a pastor stopped to pray with the officers.

1 p.m.: The memorial for George Floyd is underway in Minneapolis.

11:57 a.m.: A group of about 100 protesters gathered at Dallas City Hall for a silent protest.

Below are images and videos from Wednesday's events and protests. 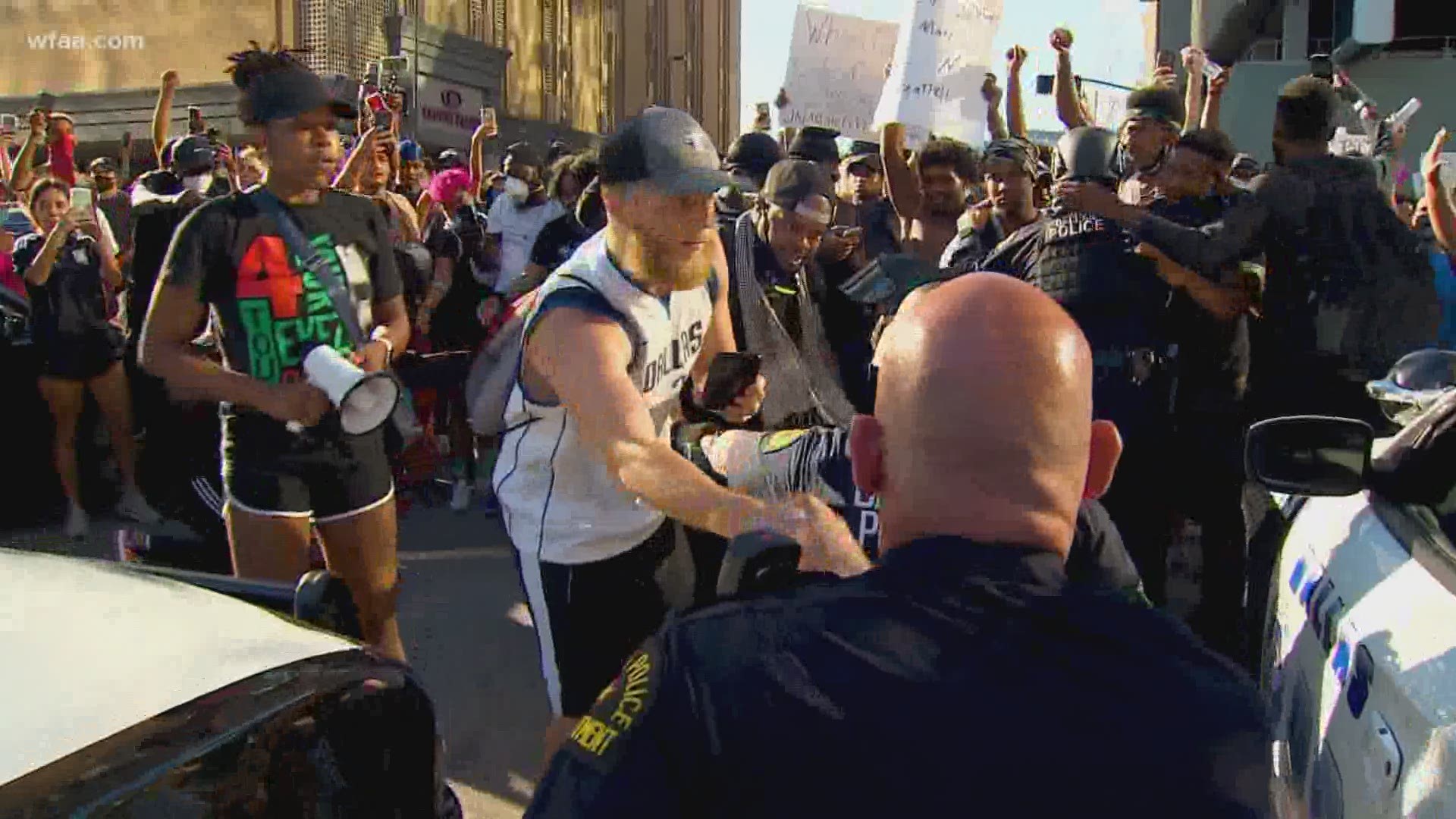 8:46: A number becomes a potent symbol of police brutality

Small gesture in a difficult time: Arlington officer takes a knee during protest