Sunday marked the third straight day of demonstrations in Dallas and Fort Worth. 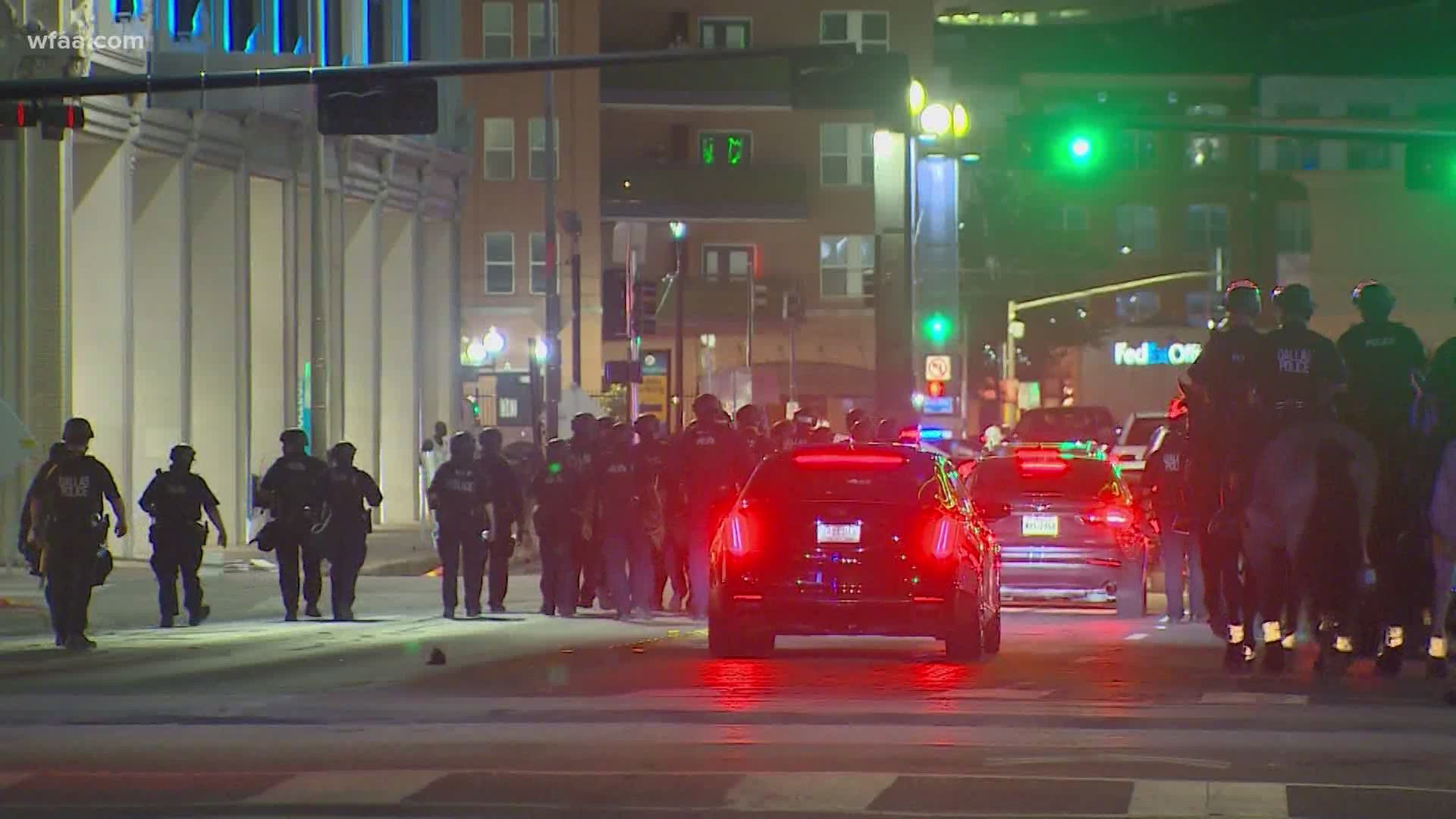 A curfew in downtown Dallas seemed to dispel protesters Sunday before any major civil unrest took place. Dallas police said they arrested more than 120 as they enforced the 7 p.m. curfew.

Farther west, protesters remained active, though peaceful, in Fort Worth later into the night. For a couple hours, demonstrators blocked the West 7th Street Bridge, before officers deployed tear gas to disperse the crowd.

As of 10:30 p.m., Fort Worth police said one person had been arrested, but aerial footage showed more people being placed into handcuffs.

Previous protests on Friday and Saturday evenings remained calm in Fort Worth.

City leaders called for calm and peace earlier Sunday after two days of protests, civil unrest and vandalism in Dallas, and across the country, after the death of George Floyd earlier this week in Minneapolis police custody.

Dallas has been placed under a curfew from 7 p.m. to 6 a.m., Chief of Police Renee Hall said Sunday afternoon, for a number of days. Mayor Eric Johnson had said during an interview on WFAA on Sunday morning that decision would be dependent upon what law enforcement leaders felt they needed to keep control.

A recap of what happened on Sunday in North Texas:

10:29 p.m.: Fort Worth police say they have arrested one person from the West 7th Bridge.

"This is a fluid situation and Irving Public Safety are prepared to respond as necessary," a statement from the city reads.

The boundaries in Irving, according to the statement, are as follows:

9:27 p.m.: Dallas police say they have arrested at least 30 people, with "several more currently being processed to go to jail."

8 p.m. Protesters and police faced off on the West 7th Street Bridge in Fort Worth. The protesters were holding signs and formed a firm line across the street.

The city does not have a curfew in effect.

7:27 p.m.: The Dallas Police Department tweeted that protesters "are starting to scatter as officers are starting to apprehend those that are in violation of the curfew ordinance."

7:25 p.m.: Dallas Area Rapid Transit said its shuttle buses will still be in service through the curfew but will not stop at any stations in the curfew area.

Shuttle buses will travel between:

A number of officers could be seen lining up as they approached protesters in a park near Pacific Avenue and Olive Street.

7 p.m.: A mandatory curfew is now in effect across Dallas, Highland Park and University Park.

6:55 p.m.: DART bus services in University Park and Highland Park will be affected by a curfew in place from 7 p.m. to 6 a.m., officials said.

6:30 p.m.: A crowd of around 200 protesters have gathered in McKinney for a demonstration held by March For Our Lives Greater Dallas in front of the police department.

6 p.m.: About 200 protesters are walking through the streets of downtown Dallas towards police headquarters, officials said. Another 200 are peacefully protesting in front of the building.

PHOTOS: A third day of protests over George Floyd's death in Dallas

1 / 39
Tiffany Liou
Peaceful demonstrators protesting the death of George Floyd gathered at Klyde Warren in Dallas on May 31, 2020.

5:55 p.m.: University Park and Highland Park will be under a mandatory curfew Sunday night as well, officials announced. The curfews in each municipality will last from 7 p.m. until 6 a.m. in coordination with Dallas police.

The full ordinance can be found here.

All of those in both municipalities will be under the curfew and are asked to stay home. Residents are also being asked to lock their cars, remove all valuables and park in a garage if possible.

Officials also advised residents lock their doors and activate any alarm systems they may have.

5:35 p.m.: Dallas businesses in the area under the newly instituted curfew were urged by police to close their doors at 5 p.m. to "avoid harm," police officials said.

Police will be present at known protests to protect those in the area, manage traffic and "remove or control bricks or anything else which may be used to harm people, vandalize or destroy property, or aid in other criminal mischief."

Officials said those in the area who observe any criminal activity are "strongly urged" by police to call 911 and not take matters into their own hands.

"Residents or employees who live or work in the curfew area should be prepared to show proof of residency or work credentials if they need to travel in or out of the area while curfew is in effect," a news release said.

5:30 p.m.: Protesters gathered in Klyde Warren Park have begun to march down the streets around the park near the Dallas Museum of Art.

5:15 p.m.: The city of Denton will be placed under a curfew as well, leaders said when announcing a state of disaster had been declared for the city. The curfew will be in effect from 9 p.m. to 6 a.m. each night until Sunday, June 7.

No one will be allowed on any public street or in any public place during that time aside from first responders and journalists, according to the order.

Any weapons, bags larger than a small clutch or projectiles or signs that could be used to damage property are prohibited in the downtown area from 5 p.m. until 6 a.m., the order added.

Anyone who violates the order could be fined up to $500.

5:10 p.m.: Law enforcement and city officials have asked that DART suspend service during the curfew from 7 p.m. to 6 a.m. within the area under the order, DART officials said.

4:10 p.m.: Dallas Mayor Eric Johnson has issued a local state of disaster "due to riots and civil disorder" that will expire in seven days. The declaration allows the city manager to implement emergency regulations, including a curfew.

Johnson issued the following statement after signing the order into effect:

"I am supportive of peaceful demonstrations, and police should protect the protesters and their right to express themselves in a lawful manner. And I understand and share their pain over the tragic, brutal, and senseless death of George Floyd in Minneapolis.

But what we have seen from small groups this weekend was not a protest. They dishonored and exploited peaceful protesters and their message and engaged in selfish lawlessness that has nothing to do with human rights or Mr. Floyd's death.
"We cannot allow anyone to loot or vandalize or threaten the lives and livelihoods of people in Dallas. Enough is enough. We need to put a stop to the criminal destruction of our city. Accordingly, at the request of our City's law enforcement chain of command, I am issuing this disaster declaration to allow them to use extraordinary law enforcement tools such as a curfew to maintain order.

Dallas has experienced unprecedented challenges and heartache over the last few months. For many communities of color, the public health and economic consequences of the COVID-19 pandemic also compounded longstanding frustrations with systemic issues in our country. We must listen to one another, and we must learn to love each other.

I love this city, and I love its kind, resilient people. We are strong, and we will get through this together."

3:50 p.m.: A small crowd of people have begun to march outside of the Omni hotel in downtown Dallas and are moving along the sidewalks.

3:15 p.m.: A large crowd has gathered for a vigil at the Freedman's African Memorial Park and Cemetery on Lemmon Avenue in Dallas.

3:10 p.m.: Dallas Chief of Police Renee Hall said the decision to implement a curfew came after two nights of vandalism and looting occurred near and in downtown Dallas. The area within the curfew limits was where small groups of looters had primarily been targeting businesses, according to Hall.

Hall also said there were about 500 state troopers who had worked with the police department in the city on Saturday, along with officers from Irving and Allen.

2:55 p.m.: Parts of Dallas will be placed under a curfew for the next several days, Dallas Chief of Police Renee Hall said during a news conference. The area between Oak Lawn Avenue, Riverfront Boulevard, Corinth Street and Peak Street will be under the curfew starting at 7 p.m. and lasting until 6 a.m.

12:30 p.m.: Gov. Greg Abbott declares a state of disaster in response to the civil unrest seen across Texas.

8:30 a.m.: During an interview on WFAA, Dallas Mayor Eric Johnson said it is important that the different groups of people taking to the streets are properly distinguished.

There are "legitimate protesters" who want to bring attention to their cause but not doing anything illegal, he explained, as well as bored onlookers who have been "cooped up in the house for two months" and come to watch the protests. And then there are people who have come out "to engage in mischief and criminal activity."

"They are the ones with the rocks in their hands walking down the streets and they are not there to protest. They are not protesters," he said. "When they're attacking folks, it's not 'the protesters have attacked' or 'protest has turned violent.' They were never there to protest in the first place."

7 a.m.: Spokespeople for NorthPark Center and Galleria Dallas said both malls would be closed Sunday, and Target leaders have closed six locations in Dallas and dozens more across the country as the civil unrest continues to unfold.