'He scammed my mom out of $10,000': Better Business Bureau says complaints against contractors are up

From storm damage to regular home improvement projects, we've got tips to help you find a good, reliable contractor. 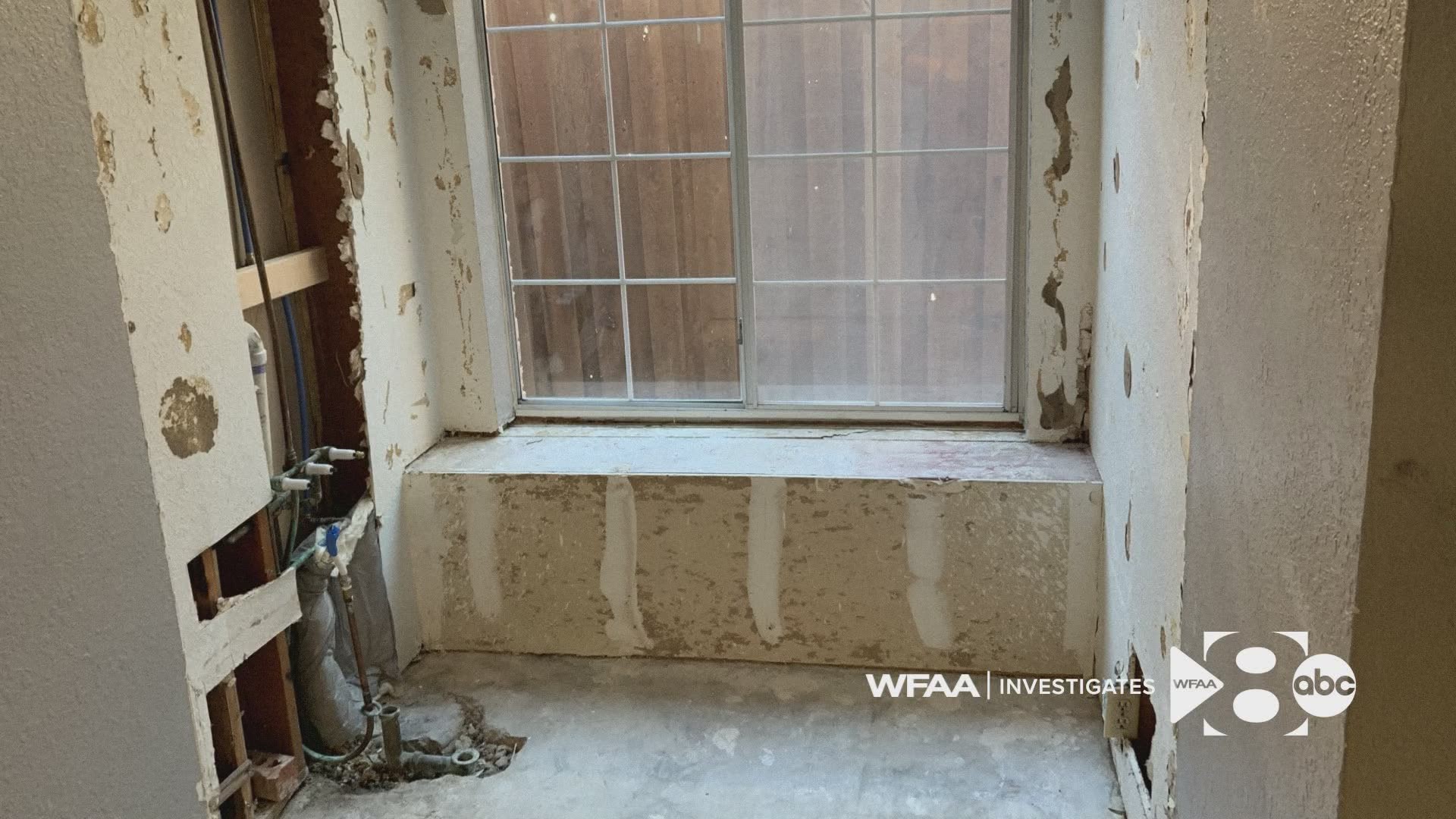 This week, repairs begin after a historic winter storm froze water pipes that flooded homes, apartments and office buildings across the state.

But experts say rushing to select a contractor could end up causing you worse problems.

How do you know who to trust? We've compiled a list of tips at the end of this story to help you select a good, honest contractor.

Even before last week's storms, the COVID lockdown had prompted a wave of home improvement projects, meaning contractors were in high demand. But some North Texans said they didn't get what they paid for.

Rochelle Lindsay filed one of them.

Lindsay, a single working mom, saved up to renovate her bathroom.

She hired a contractor named Don Childers and paid him $10,000 to complete the job.

“He was a nice older gentleman,” Lindsay said. “He reminded me of my grandfather.”

That is, until she says he ran off with her money, leaving her only bathroom in the house demolished and completely unusable.

“(Childers) stole the money,” Lindsay said. “He didn't deliver my product. He didn't finish the work and he's not responding. He disappeared.”

Lindsay isn’t the only one looking for Childers these days, we found.

“I want to ring his neck,” said Concepcion Howard, who said she is another victim of Childers.

“He took the money, but then he didn't do anything but buy the paint,” said Carmen Moore.

“I did a roofing job for him as one of his (subcontractors) and he never did pay me,” said Edward Cuellar.

“He’s a con artist – no doubt about it,” said Kent Taylor.

WFAA talked to nine people – all of them have similar stories about Don Childers.

Don Childers, also known as Billy Don Childers, has been taking contracting jobs across North Texas for nearly two decades. He uses the business name The Don Childers Group, LLC. BBB officials said they have reviewed numerous complaints about Childers and have given his business an F rating on their website.

In court files, WFAA discovered judgement after judgement against Childers.

“I hate that he's done it to so many other people,” said Howard after WFAA told her she wasn’t alone.

Howard hired Childers in 2018 to remodel two bathrooms in her home. She says Childers asked her for a $4,000 deposit.

Howard says Childers never showed up to do any work.

When she took him to court, she said he didn’t show up there either.

Howard won a judgement against Childers for $4,000 but says she hasn't seen a penny.

“You might as well take a civil judgment and burn it because there's no repercussions for (Childers),” said Lindsay. “He doesn’t pay his (civil judgements). He just turns around and files bankruptcy … So, could I go to the civil court right now and get a judgement? I could.  But I'm 20th in line to get any money. And he's got nothing. You can't get blood out of a turnip,” she said.

Federal court records show Childers filed for bankruptcy in Dallas in 2017. The case was closed in 2018.

WFAA talked to Childers on the phone. He told us he intends to clear up these problems but then he stopped returning our phone calls, emails and texts.

When Childers didn’t show up to do the work he had promised, Lindsay began to worry he might run off with her money so she recorded her phone call with him.

In the recording, Childers is heard telling Lindsay “I’ve been in business since 1972 and I've done a ton of work for judges, district attorneys, I've worked for attorneys general. I’ve worked for everybody and always done well. We do good work. We finish our jobs and everyone is happy.”

But WFAA’s found several felony convictions for theft, including four years in prison, and numerous lawsuits against Childers.

According to the Texas Department of Criminal Justice, Billy Don Childers was in prison from 1994 to 1998 after being convicted of theft of property in Randall County, theft by check in Potter County and theft in Lubbock County. He was on mandatory supervision parole until June 2005, prison officials said.

Lindsay said she should have done more research before writing Childers a check.

“I should've vetted him,” she said. “Maybe I would've seen stuff. But I shouldn't have to hire a private investigator before I hire a contractor, you know?”

Licensing? Not in Texas.

Many states make it easier for homeowners to vet contractors by requiring some sort of licensing on the city, county or state level. In those states, the government can revoke a contractor's license for bad behavior and any actions taken against a contractor are made public. Texas is not one of them.

That means there is no regulatory board to penalize contractors like Childers for bad behavior. And beyond reviews on the Better Business Bureau’s website, there is no way for homeowners to thoroughly check out a contractor, especially if they change their business name.

“You get your nails done, you get your hair done, they have to have licenses,” Lindsay said. “Why does that not apply to contractors that are coming in and ripping up your home?”

There have been no recent legislative attempts to require all Texas contractors be licensed. But for the past five legislative sessions, there have been efforts to license roofers in Texas. “In every session, it fails miserably,” said Steven Badger.

Badger is a Dallas attorney who spent two years lobbying for a bill last session that would have required roofers to register in Texas.

So why is a Dallas attorney invested in seeing this kind of legislation through?

As an attorney for the insurance industry, Badger said his clients call weekly complaining that their homeowner customers gave their insurance money away to a scammer.

Badger also has a judgement with more than 100 plaintiffs’ names on it against a bad contractor for $515,000 dollars.

“And you know what? It’s worthless,” Badger said.

“We will never collect a dime. These crooks know it. They know that it's a long shot that law enforcement will do anything. So, all we are trying to do is a simple registration bill,” Badger said.

House Bill 2101, introduced in 2019, would have required roofers to register in the state of Texas.

“Then, if someone is bad and is ripping people off, there's a way to take away their registration so they can no longer do roofing jobs. (And) we educate consumers (to) only hire contractors who are registered in Texas,” he said.

The bill made it to the floor of the Texas House during the 2019 legislative session. That’s further than any bill of its kind had ever made it before. But it was met with heated opposition.

The bill died with 99 lawmakers voting "no." Among them was State Rep. Ramon Romero, a Democrat from Fort Worth and a contractor himself.

“I believe Texas prides itself in being the type of place where you can come … and you can start a business. Yes, we do expect you to be a good business person. But given the fact that the roofing registry bill failed last session by over two thirds majority, I think that tells you how Democrats and Republicans feel about creating licensure across the whole,” Rep. Romero said.

Romero argued that the bill would have driven up costs for consumers and done little to stop bad contractors from hurting Texans.

“It is absolutely ridiculous that we don't help people protect their largest investment,” he said. “We absolutely should regulate all contractors who are coming into peoples’ homes and taking peoples’ money to fix their most valuable asset,” he said.

It's a tough sell in the legislature “so we come back every session and try again,” Badger said. He said it’s unclear who will carry this bill this session, which lasts through May.

Lindsay finally got her bathroom renovated by someone else. But she paid for it twice.

“There’s got to be harsher punishments for this type of behavior, something that is going to deter these people” she said. “I've learned a very expensive lesson.”

What you can do to protect yourself

Do you know the do’s and don’ts for hiring a contractor?

Russell Lawrenz of Lawrenz Contracting told us his number one tip: Don't pay anyone before a job begins.

Check out Lawrenz’s webpage “The Top Hail Damage Roof Mistakes Homeowners Make … And How to Avoid Them.”

The Better Business Bureau of North Central Texas has an entire section of their website dedicated to natural disasters: Storm Recovery, Repair and Relief.

Even before the winter storm, they said that last year, there was a 5 percent increase in complaints filed against the home improvement companies, from 1,423 complaints in 2019 to 1,498 in 2020.

“This is a great trend to see, and helps solidify the importance of looking up a company’s history prior to entering into a contract,” Long said. “This simple step can help reduce the likelihood of having to file a complaint with BBB since you can avoid those businesses who may already have a proven track record of poor marketplace behavior.”

The BBB has the following tips to avoid falling victim to a bad contractor:

Contractors Should Do the Following