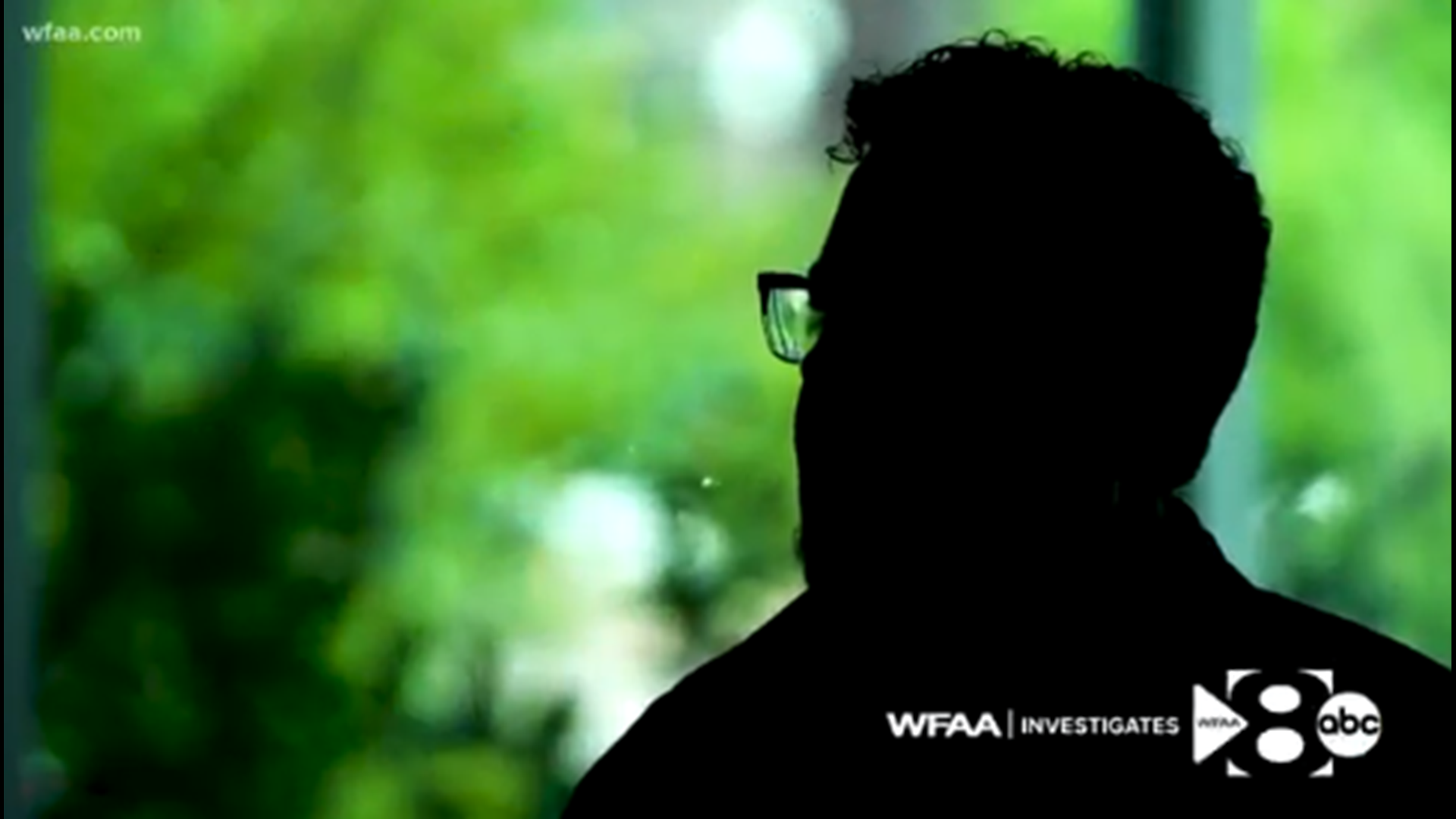 DALLAS — It’s a dark secret they've kept for decades. But for the first time, two North Texas men are speaking out about their alleged abuse while in the Boy Scouts.

The Boy Scouts of America has prepared many young boys for life. But recently filed lawsuits claim the organization also became a magnet for child molesters and helped cover some of the suspected predator’s tracks.

“The most important thing in my life was making sure that nobody knew about this…I subconsciously thought that if I ever had to tell this story, it would kill me,” John, a former Boy Scout, told WFAA. “The sad thing about that is it's exactly the opposite. If you never tell the story it will kill you.”

John, who asked not to be identified by his real name, said he was sexually abused by his troop leader when he was just 12 years old.

RELATED: Boy Scouts of America could face bankruptcy after wave of new lawsuits

It was the 1960s in Amarillo. John was a Boy Scout. His troop was on an overnight camping trip. That's when he said the sexual abuse started.

“And the next day it was like ‘Well, nothing happened.’ Except now, I was in a situation where he expected that to happen again, and again and again,” he said.

David was a Boy Scout in the same Amarillo troop 20 years after John.

David, who asked that his last name not be used, remembers being very confused about the treatment he received from his scout leader.

“I was a kid,” David told WFAA. “I didn't know it was something that was weird. I thought this was just part of how the boy scouts operate, maybe this is part of becoming a man.’”

David’s alleged abuser is different from John’s. But David said that like John, the abuse began during an overnight camping trip.

“So, we always slept naked,” David recalled. “But that night was the first night he touched me, he snuggled up next to me, he tried to perform sodomy on me, and this is with a bunch of other boys around. And then after that it was just multiple times over the years with me and these other three guys that I know of.”

David is one of more than 800 former Boy Scouts who have filed suit against the organization alleging their scout leaders sexually abused them from the mid-1960s to the late-1980s.

Many of the complainants are represented by Seattle-based attorney Vincent Nappo.

“I think last we checked we were at 200 (cases) and growing,” Nappo told WFAA. “We have spoken to more than 300 men in the last six months and I will say people are reaching out reporting abuse and wanting to move forward with lawsuits literally every day.”

The reason Nappo and other attorneys across the country can file lawsuits decades after the alleged abuse happened is because 15 states have recently relaxed their laws. The legal changes are part of a movement by various states to widen or revive the period of time to allow survivors of sexual abuse to take legal action.

Nappo’s lawsuits allege many of the scout leaders “abused multiple children, sometimes more than twenty or thirty children each and the organization…knew that its…members were using their positions to groom and to sexually abuse children.”

“And then to not do anything to tell the families that you're inviting to come join this program that you're advertising as safe…without disclosing any of that risk or any of that danger, is pretty egregious,” Nappo told WFAA.

Court records have revealed since 1935, the BSA have maintained a secret “perversion file." It’s a confidential list of Boy Scout leaders and volunteers who have been accused of sexually abusing boys from 1944-2016.

Inside the perversion file are more than 7,800 volunteers, members and scout leaders accused of sexual abuse. Three hundred twenty-five are from troops in Texas, including nearly 70 from troops in North Texas.

From this list, we have mapped out the number of individuals accused of abuse in Texas cities from 1944 to 2016:

WFAA ran the names of the 70 alleged North Texas abusers from North Texas. We discovered only five were prosecuted and added to the state's sex offender registry. Whether the Boy Scouts or someone else reported them is unclear.

But the bottom line: dozens of those North Texans accused in the perversion files were never prosecuted, and never forced to register as a sex offender.

Yet the Amarillo Police Department told WFAA they have no record that the Boy Scouts ever filed a report on Walker with them.

“It appears this man was allowed to just move to a new location and continue on with his life without any limitations, any criminal consequences or anything,” Nappo said.

Today, Bill Walker is living up a gated, wooded road in Ada, Okla.

WFAA went to Ada and made numerous attempts to contact Walker, but our calls and messages were not returned.

Walker is named 64 times in David's lawsuit, which claims the BSA “chose to protect its reputation and wealth” and as a result “for decades thousands of children were sexually abused.”

“It makes me angry that they hid that and were afraid to address it. I mean, how many other kids did they put in danger?” David said.

That’s a question WFAA wanted to ask the BSA, but the Irving-based organization declined to speak with us on camera and instead sent WFAA a statement saying;

“All incidents of suspected abuse are reported to law enforcement…We recognize, however, that there were some instances in our organization’s history when cases were not addressed in a manner consistent with our commitment to protect scouts.”

To date, the BSA have only released the names of one-sixth (1,250 of 7,800) of the suspected pedophiles they have in their confidential files.

With hundreds of lawsuits recently filed across the nation, recent annual reports from the Boy Scouts show the organization disclosed that it is “exploring all options available,” which could include possible financial remedies such as bankruptcy.

“I have the power to tell my story. And that's all I can do,” David told WFAA.

In a development this week, the BSA announced a partnership with a counseling organization for male survivors of sexual abuse. The five-year partnership between the BSA and 1in6 is designed to expand trauma services for those survivors who come forward.

“We sincerely apologize to anyone who was harmed in scouting,” president and CEO of the BSA Roger Mosby said in a written statement.

“In addition to implementing strong policies to prevent abuse, we are dedicated to supporting victims when and how they need it,” Mosby added.