"To take the time to return that to the family of an officer killed in the line of duty, is just above and beyond," said retired Dallas police captain Jack Bragg. 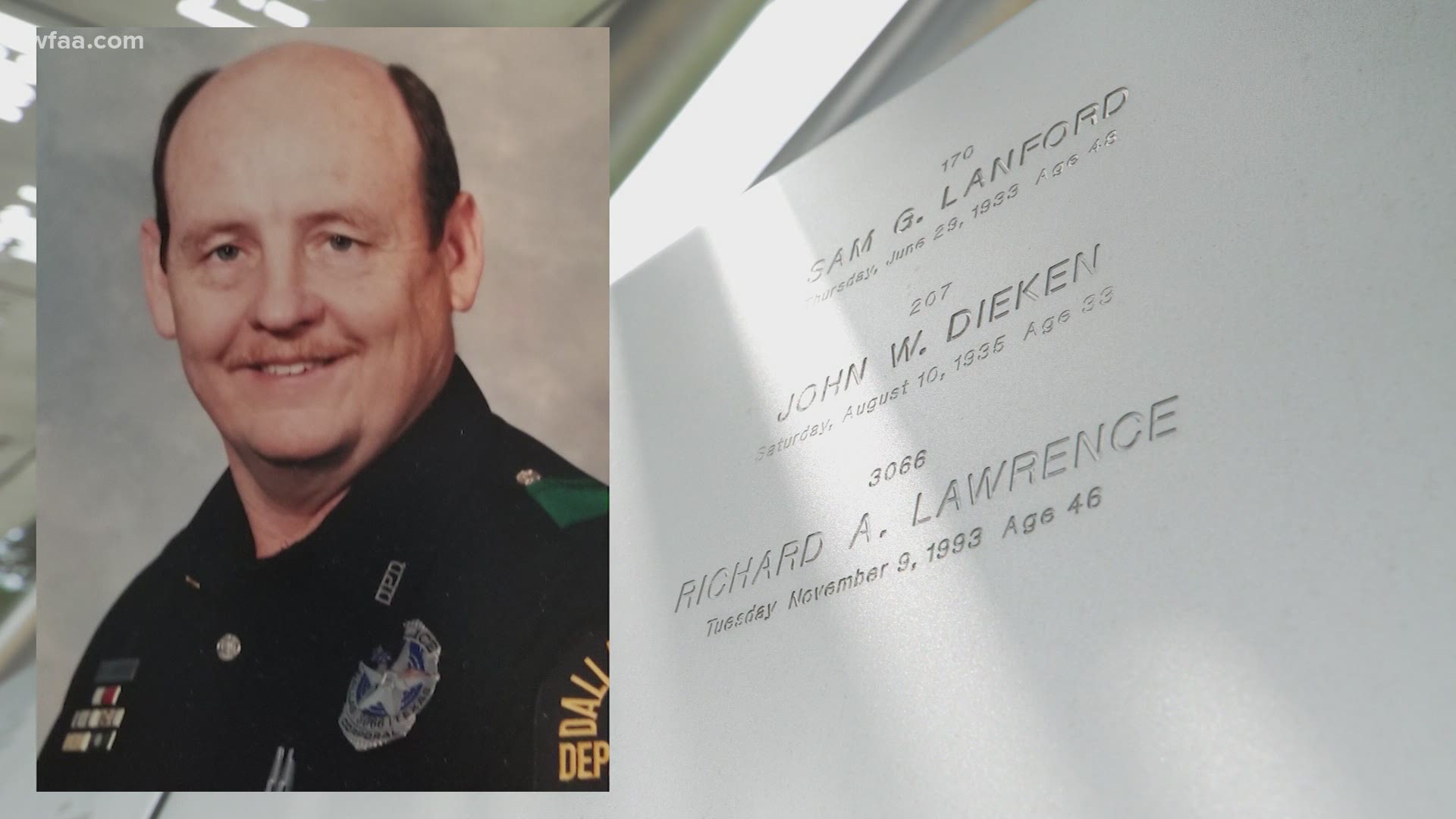 DALLAS — The family of a slain Dallas police officer received an unexpected reminder this month of his service and sacrifice nearly 27 years after his death.

At a time when policing is under a national microscope, the family hopes it can remind people of the dedicated officers who give their lives in the line of duty.

Badge number 3066 is among the dozens cut into the steel roof of the Dallas Police Memorial next to Dallas City Hall. Streaming sunlight casts the badge numbers onto the pavement below, onto the streets the officers once protected. Badge 3066 was worn by Sr. Cpl. Richard Lawrence. He was 46 years old when he interrupted two car thieves outside an apartment complex and was shot and killed on Nov. 9th, 1993.

"I was three months away from being 15 years old," his daughter Anessa Whitley said. "I talked to him about six hours before he died," she said recalling the plan he had to teach her to drive a car the next weekend.

"Instead, we were burying him," she said.

"I was lucky to have a good strong dad like him," she said from her home near Houston. "He had over 100 commendations when he died. Including a life-saving award."

The memories of her father came flooding back these 27 years after his death because of an unusual find. His handgun was recently found.

"And I remember him carrying it," said his former Dallas police partner Jack Bragg.

A man, who asked not to be identified for this story, contacted Bragg after he purchased a Browning handgun at an auction. It was engraved with "DPD," Lawrence's initials "RAL" and that 3066 badge number. The buyer's search for the officer it once belonged to led him to Bragg, who arranged to have it delivered to Lawrence's son.

"He just did it out of the goodness of his heart," Bragg said of the man who found the gun and refused any form of payment.

"To take the time to return that to the family of an officer killed in the line of duty, is just above and beyond," said Bragg.

Bragg says the gun, one of the officer's personal backup weapons, was stolen in a motor vehicle burglary in the years shortly before he died.

"You think about it. It never goes away," said Rhett Lawrence, the officer's son. "I'm amazingly grateful for him, to bring back these memories of my father."

And for the daughter who still wears a pendant replica of her dad's police badge around her neck, with the words "Baby Girl" engraved on the back, it has an even deeper meaning. The gun resurfaced these 27 years later the same week she was taking the bar exam. A good omen, she says, that maybe her dad is still watching over her.

"It's like getting a little piece of him back," Anessa Whitley said. "And you want to hold on. You miss him."

Police are very much in the spotlight right now. A daughter and a son saw the return of their father's personal handgun as an opportunity to talk again about the ones who give their lives to protect and serve.

"There are people who were meant to be officers and Dad was one of them," Whitley said. "That's the kind of officers that are out there. That do this every day."

Memories of service and sacrifice that, like those badge numbers at the Dallas Police Memorial, they hope never fade away.