After walking for the first time since 2009, Corey Borner emotionally thanks his mother while being recognized in DeSoto

Borner's spinal cord was injured during football practice in 2009. With the help of an exoskeleton, he walked again for the first time this summer. 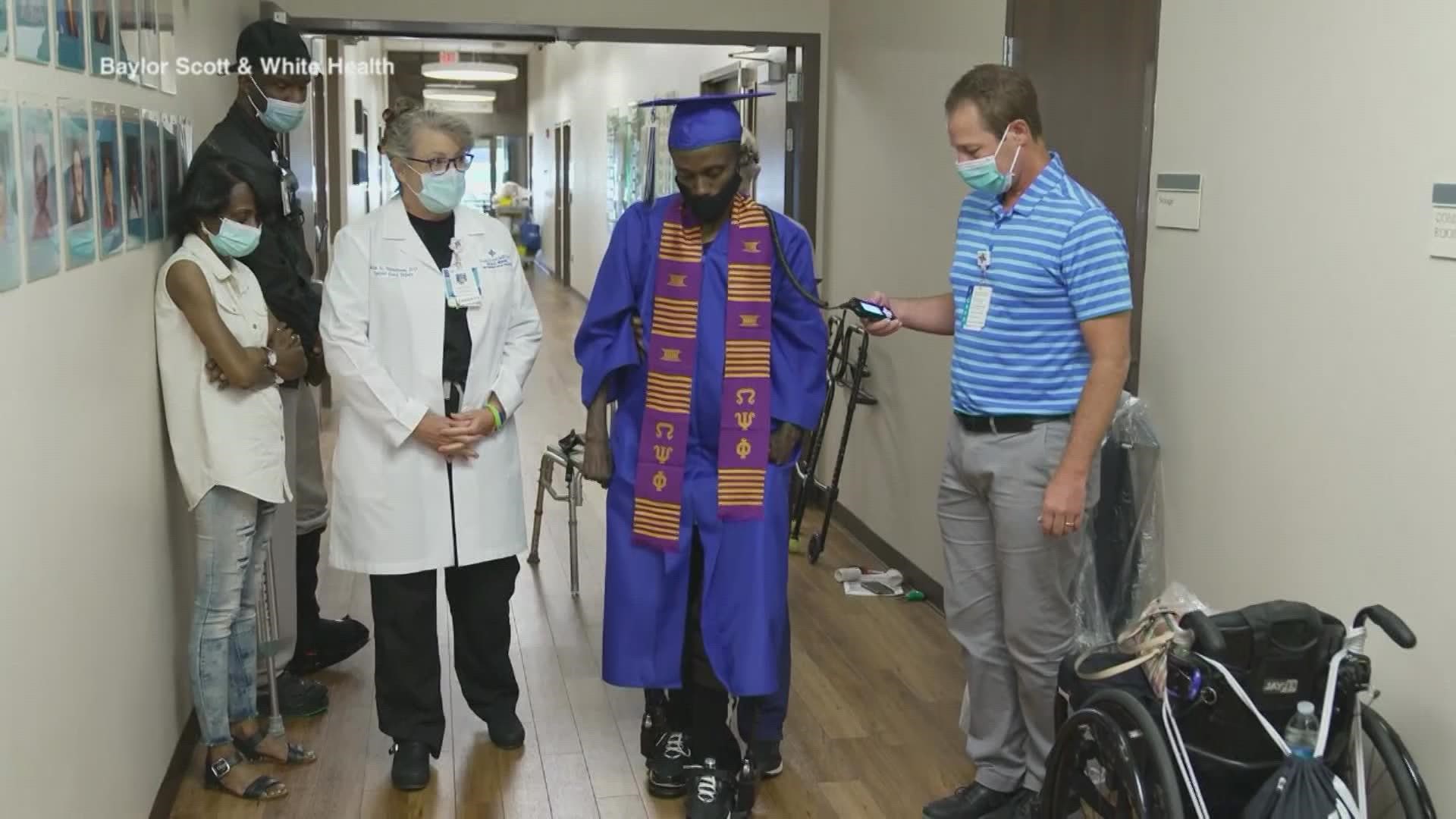 DESOTO, Texas — Corey Borner takes life one day at a time. The 28-year-old has spent 12 years in a wheelchair, paralyzed from the waist down after a gruesome football injury in 2009.

Ever since, he's fought to stand and walk on his own again — a goal he finally achieved this summer.

And on Tuesday in DeSoto, September 7 officially had Borner's name on it.

"I just want to shock the world and prove people wrong," Borner said with a smile. "It's a blessing to have that mindset."

Last month, Borner became a social media sensation when he surprised friends and family by walking across the stage at the University of North Texas at Dallas to receive his diploma.

He did it with the help of Baylor Scott & White by using an exoskeleton suit.

Borner worked on the feat behind the scenes over the summer and is now walking over 1,000 steps in the suit.

On Tuesday, the City of DeSoto proclaimed Sept. 7 as Corey Borner Day.

"You just have to take the negative and turn it into a positive," Borner said. "What are you going to do to make your situation better?"

Had the pleasure of meeting @LILCOREY_TRILL in DeSoto tonight.

He shocked the world last month by walking to receive his diploma from UNT.

He approaches life one day at a time.

On Tuesday in DeSoto—the day officially had his name on it.

Hear his joy at 10 on @wfaa. pic.twitter.com/aZyfsvtdND

Borner was at football practice when he went in for a play and left the field with a C5-C6 spinal injury in 2009. Doctors told him he would be in a wheelchair for the rest of his life.

Despite his situation, he's gone to great lengths to give back to his community. He is mostly known as a motivational speaker and puts on a football camp for kids, too.

Borner received his recognition from the City of DeSoto alongside a standing ovation.

For one of the first times, his family says, he broke down speaking to his mother.

"Tough times don't last long; tough people do," Borner said. "To my mom, I appreciate everything that you do. You bathed me, and you clothed me, and no matter what, I got you. I'm going to take care of you."

Borner's inspiring story is only taking off from this point.

He keeps raising his step goal and wants people to celebrate his day in DeSoto with positivity.

"Use me to uplift you, to make you happy in some way," Borner said.