Desoto's Borner inspires, by standing on his own two feet 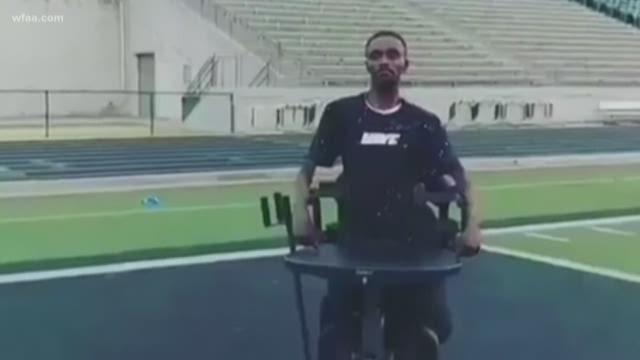 "My baby's in his standing frame!" his mother Charlotte exclaims in a viral video. "Corey Borner!"

Thousands upon thousands of retweets, supporting a man standing on his own two feet.

"The last time I saw him walk, was May 6th, that morning," Charlotte says. "When he ran down the stairs, to go out that front door to catch the bus."

"It happened on the last play of practice," Corey Borner explains. "I told the coach, 'one more play'. Because the practice was going well for me.

"And that's when it happened. Soon as he caught it. I was playing cornerback."

Borner put his helmet in the stomach of the wide receiver, and suffered a spinal cord injury that has robbed him of the ability to walk, ever since.

"Now, just because he's in a wheel chair, that doesn't stop him," his father Michael declares. "And I tell him, don't let that stop you."

Corey Borner hasn't let anything stop him. Not for a moment.

Borner has become an inspiration for people around the world. Posting videos and pictures, posing with celebrities he's become friends with because of the inspiration he provides, and always preaching the same message.

"What I'm here for now is to inspire the world, and enjoy life," Corey says. "I'm still here. It's a blessing to be here."

His mother helps take care of him. And in a way, he takes care of her, too.

"Kindhearted," is how Charlotte describes Corey. "Always wants to know how I feel, or how did I sleep."

Corey has gotten his associates degree. And now he's continuing his education at UNT. And all the while, he continues to pursue his ultimate goal.

"I would give anything just to see him be able to do that again," Charlotte says.

And if anyone has the attitude to make it happen... it's Corey Borner.

"Just believe in yourself. Believe," Corey says. "Because I will walk again. It's gonna take some time. But I'm going to still work for it. I can just clap my hands and say 'God, I'm ready to walk.' God don't work like that. So I'm going to continue to keep fighting."