The suit says one of the alleged victims reported Chemirmir to Preston Place before her death. 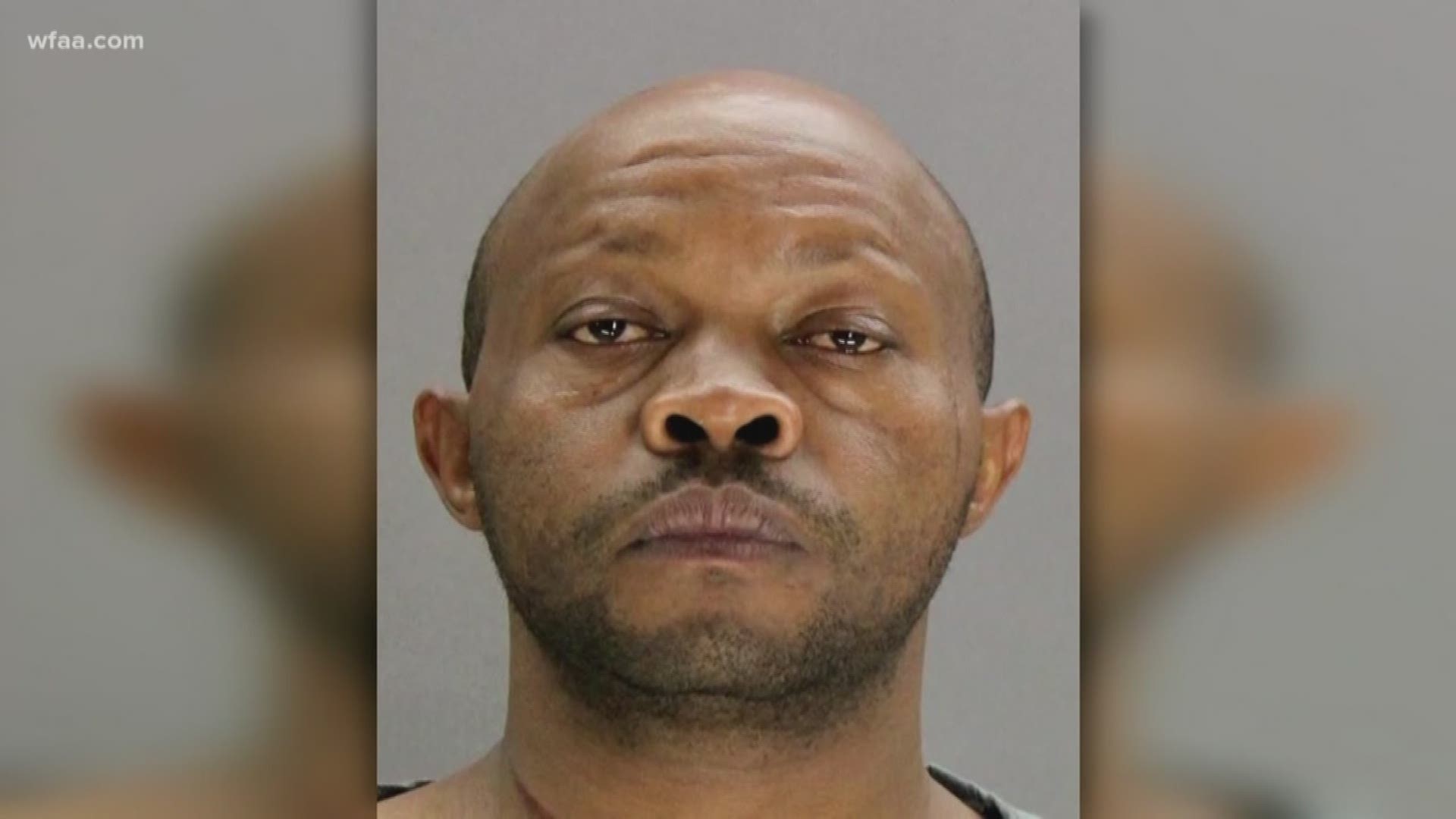 Chemirmir, 47, is charged with 12 counts of capital murder in connection with the deaths of elderly women in Dallas and Collin counties.

Civil lawsuits accuse him of killing more than 20 people, including a suit filed this week that names 81-year-old Miriam Nelson as another victim of Chemirmir. Nelson is the mother-in-law of Pro Football Hall of Famer and Dallas Cowboys legend, Cliff Harris.

Court documents claim Chemirmir robbed and suffocated Nelson on March 9, 2018, inside her residence at Preston Place. Preston Place markets itself as an upscale gated senior living community that was gated with 24-hour security surveillance, the suit says.

Nelson was the sixth of seven elderly women who lawsuits claim was killed by Chemirmir at the community.

The suit says Nelson reported Chemirmir to Preston Place before her death.

Court records show each woman was killed in the same way — smothered by a pillow.

Two other civil lawsuits were also filed Tuesday against Chemirmir, one on behalf of Ann Conklin and another on behalf of Martha Williams, who court documents say were killed by Chemirmir at Preston Place in 2018. The lawsuit for Conklin accuses the living facility of negligence. The lawsuit for Williams does the same, along with an accusation of wrongful death.

Nelson is one of three victims not previously linked to the alleged serial killer. One victim is listed as "Jane Doe," she was killed on Dec. 10, 2017. The other victim is Mamie Dell Miya, killed on Dec. 8, 2017.

The lawsuit alleges that Preston Place had poor security measures for its elderly residents and did not do enough to protect the victims.

Documents say Chemirmir would repeatedly pretend to pose as a maintenance worker to gain access to his victims.

The lawsuit claims security measures at Preston Place were insufficient.

"Preston Place was grossly insufficient and posted substantial risks of harm to their vulnerable and unsuspecting residents," the documents read.

"Despite such knowledge, Defendants made the conscious decision to prioritize the profits of their private equity investors over the lives of the elderly residents they undertook to protect," the lawsuit says.

The lawsuit describes Miriam as spending her final moments in unimaginable pain and terror, which will haunt her children forever.

The wrongful death suit, filed on behalf of Miriam's family, seeks to hold the facility accountable for its disregard for the health and safety of residents.

Miriam's children, David and Karen, say that no amount of money will bring their mother back, but they hope to prevent other families from experiencing the same loss as them, according to the suit.

She moved into Preston Place after her husband died in 2015, according to documents.

The lawsuit says she chose Preston Place because she was looking for “somewhere that was safe for an elderly woman living alone.” The facility was also located close to her daughter.

Miriam's children learned that their mother had allegedly reported Chemirmir to management two days before her death after he allegedly robbed her apartment, according to the suit.

According to court documents, a grocery delivery worker from Market Street, who Miriam was familiar with had dropped off her items, who left when they were done unloading the groceries.

But seconds later, Miriam heard a knock on her door. She called out for the person to enter because she thought the employee may have forgotten items.

“Miriam watched helplessly as a man, she did not know, who was wearing rubber gloves stepped into her apartment — Chemirmir,” the documents read.

Chemirmir told her he was there to check her apartment for leaks. The lawsuit says Miriam was confused because she thought she was familiar with the maintenance workers in the living community.

Documents describe Miriam as being scared and holding her phone tightly.

She called the front office to inform them about the incident but no one answered, so she left a detailed voicemail, the lawsuit says.

The lawsuit claims this was not the first time Chemirmir had trespassed the premises. The defendants had allegedly received reports of Chemirmir accessing apartments under false pretenses and stealing jewelry.

Miriam says one of her friends at the community had also seen the same man, but thought it was a new employee.

When management finally returned Miriam’s call, they confirmed that Chemirmir’s visit was unauthorized, the lawsuit says.

The next day Miriam’s grandson complained to management about the incident and asked that security gates would be fixed. Management told him they were “working on” new security measures and would look into it.

At this time, Miriam’s family was unaware of the five other women who had suddenly died in the community, with reports of jewelry missing from their apartments, documents say.

The day Miriam was killed

On the morning of March 9, Miriam called Karen to tell her about a stolen necklace but was “quick to remain positive.” During an afternoon call, the two were laughing.

But when Karen tried calling her mother again that afternoon, it went to voicemail, the lawsuit says.

Karen spent the rest of the day celebrating a career achievement of her husband, Cliff Harris, according to the lawsuit.

She then realized Miriam had not returned her call, which was unlike her. After at least seven unanswered calls, Karen decided to drive to her mother’s apartment.

Once she arrived, she found the door unlocked and her mother’s dead body on top of a neatly made bed, the lawsuit says.

The day after, Miriam’s family discovered more than $11,000 worth of jewelry went missing. Chemirmir had smothered Miriam with a pillow, just like his other victims.

According to the lawsuit, in months leading up to Miriam’s killing, numerous residents and their families reported complaints about malfunctioning gates.

Preston Place also claimed to have 24-hour video surveillance which ended up being false.

But the lawsuit claims the community did not have security cameras that was aimed at protecting their residents or crimes against them.

The lawsuit says the defendants were aware of Chemirmir’s authorized presence inside their gated community since November 2017. Management was alerted but never called the police.

On March 11, 2018, just days after two women, including Miriam was found dead, the daughter of another resident posted a warning on a mailbox.

But Preston Place took the notice and said it was not approved by management.

On March 18, 2018, Chemirmir robbed and suffocated a seventh resident, Ann Conklin in her apartment.

Chemirmir has been indicted on capital murder charges in Conklin’s death.

The next day, on March 19, 2018, attacked Mary Bartel. She lived nearby Conklin. Authorities say she survived and that her testimony played a major role in Chemirmir’s arrest on March 20.

The lawsuit says the community provided a false sense of security to its residents.

The lawsuit says Miriam’s children hope that by holding the defendants accountable, they will change their behavior going toward and fewer families will have to endure the same loss.

They are seeking damages and a trial by jury.

"Because civil litigation has now been filed, it would not be appropriate to discuss this matter. It is important to remember that Billy Chemirmir is the person law enforcement agencies believe is responsible for these horrible crimes. He has been in the Dallas County Jail since his arrest in March 2018 awaiting trial on multiple charges in multiple North Texas jurisdictions. We have assisted police and prosecutors with their investigation and will continue to provide information and support as requested. In addition, we continue to offer our deepest sympathies and condolences to every family affected by these senseless acts."