Brazilians have become a dominant contingent on the lucrative Professional Bull Riders circuit. And many of those riders live in Decatur, northwest of Dallas. 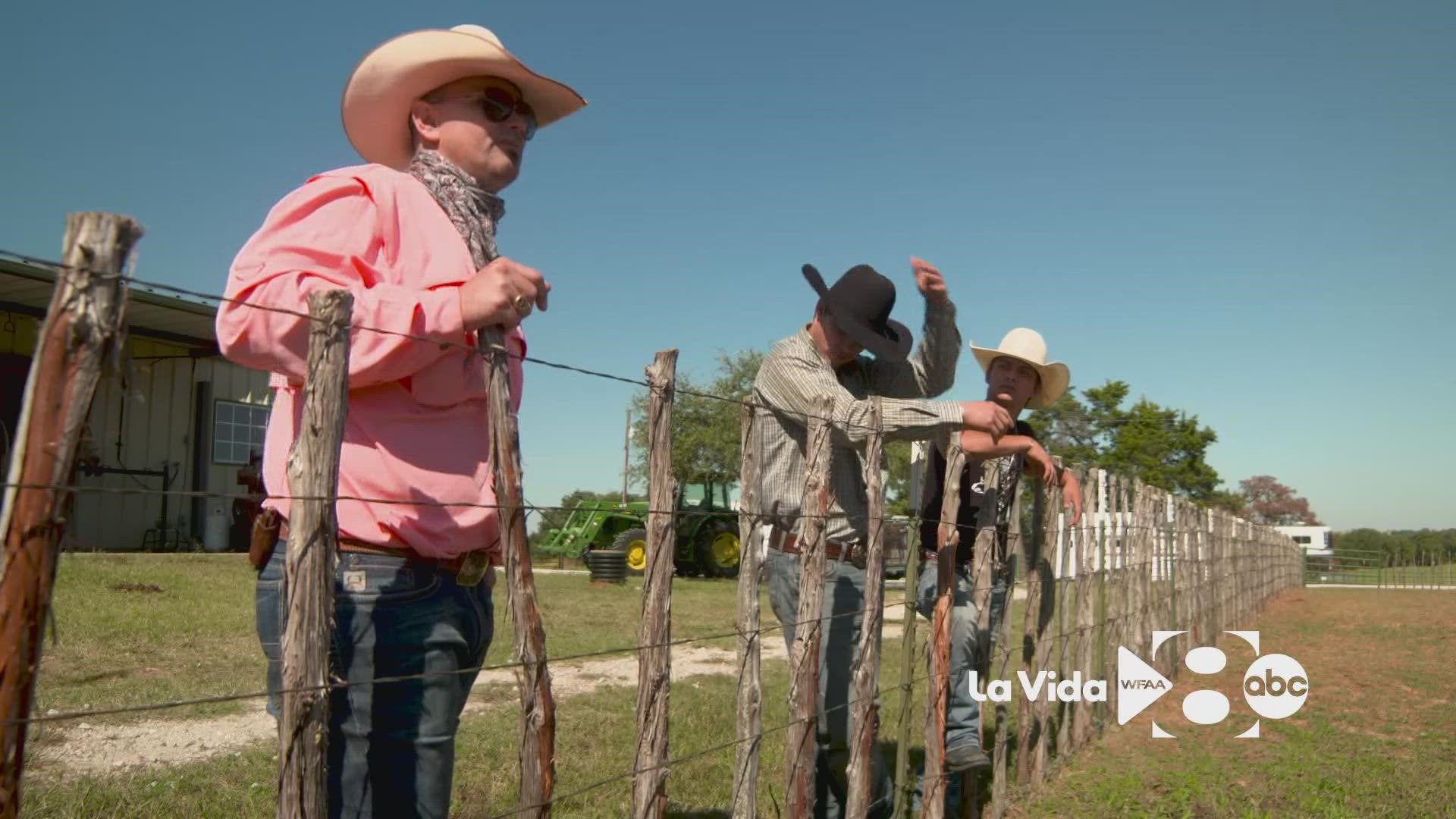 DECATUR, Texas — They grew up in the Sao Paulo state, in the south of Brazil, and they ended up here: ranch hands on a sprawling prairie northwest of Dallas.

They wrangle cattle and ride horses and haul hay bales, and they tend to the barn, which on a recent Tuesday morning was also home to a baby deer and a pair of cats.

But it was a slow day, so the Salgado brothers - Adriano, 23, and Thiago, 19, - found time to practice their roping. They pulled out a plastic steer, and Adriano lassoed the horns and pulled, setting the red practice dummy in motion across a gravel driveway. Thiago whipped his rope around the hind legs, and they both pulled tight.

And over and over they went; Adriano first, then Thiago; Thiago, then Adriano.

If only their careers were as laid back as their day job.

In three days, the brothers loaded up and hit the road for a nine-hour drive up Interstate 35, to the Pinnacle Bank Arena in Lincoln, Nebraska.

And they had eight seconds to make the trip worth their time.

The Brazil of North Texas

The Salgado brothers weren't the first Brazilian bull riders to land near Decatur, a town of about 6,000 in Wise County, about an hour northwest of Dallas. In fact, they weren't even among the first few dozen.

Over the last 20 years, Brazilians have become a dominant contingent on the lucrative Professional Bull Riders circuit. And many of those riders have settled in and around Decatur.

The list includes Jose Vitor Leme, the best bull rider in the world, at the moment.

Last weekend, Leme sealed his second straight PBR World Championship, winning the PBR World Finals event in Las Vegas. In his final ride of the competition, he recorded the highest score in PBR history, a 98.75 out of 100.

His top contender for the title was another Brazilian from Wise County, Kaique Pacheco, who won the world championship in 2018.

So how did they end up there?

Paulo Crimber had no specific answer. He just knew he never wanted to leave.

"When I stepped foot here, I knew this is where I wanted to live for the rest of my life," said Crimber, as he looked across his 400-acre ranch north of Decatur, where the Salgado brothers work.

Crimber, who learned English with a strong side of Texas twang, was among the first Brazilian riders to call Decatur home, moving there full-time in the early 2000s. He liked Decatur's rural setting but also its proximity to the Dallas-Fort Worth International Airport, where he'd jet to PBR events each weekend.

Crimber eventually had a family of his own and bought a tucked-away ranch, at the end of a gravel road, where his home sits near the bank of a small lake.

"It's paradise," said Crimber, who grew up in the city in Olimpia, Brazil.

The Crimber ranch became one home base for the Brazilian riders.

Crimber took to helping young riders get on their feet after moving to the United States, and he also began working with the PBR as a translator. While several Brazilians learned English quickly, most arrived speaking solely Portuguese, using WhatsApp, online translation tools and Crimber to navigate life in Texas.

Sometimes, Crimber found, it was the small things he could help out with the most, like helping a rider find an apartment and sign a lease.

In Decatur, they created a community of their own, training on the practice bulls at Leme's ranch and working out at Fit-N-Wise, a recreation and fitness center in town. Outside of riding, they found camaraderie in a local soccer league and in Sunday barbecue and beers at Crimber's ranch. They took a liking to Chili's, for the steak and rice, and they've been known to enjoy a Domino's pizza.

"We gotta stick together," Crimber said. "The Americans have one or two buddies, but they don't have big groups of guys. The Brazilians are like bumblebees. They're always together in a big bunch. They're loud, they talk loud, you can hear them from away."

The last 18 months tested the Brazilians. The pandemic put the PBR on hold, and several riders decided to go back home, including Adriano Salgado, who has a young son in Brazil. His brother, Thiago, stayed in the Texas, and the two brothers were split up for months.

Then, in August, tragedy struck when Amadeu Campos Silva, a 22-year-old Brazilian rider, died after a bull stepped on his chest during competition.

"News like this comes like a bomb, because we're not expecting that to happen, especially with a 22-year-old boy with a heart as good as his," Leme told the PBR's Justin Felisko.

Felisko had heard of how tight-knit the Brazilian riders were in Decatur. When he covered Campos' death, he saw that community firsthand.

"He was very much like the little brother," Felisko said. "It really reminded me just how supportive that group is of each other."

'They do not have a second plan'

Many American towns have become home to communities of immigrants, searching for a better life. Few hold such a rare collection of talent. Why are the Brazilians so good at bull riding?

When Crimber was growing up in Brazil, a day's earnings could barely buy a t-shirt. In the U.S., the Brazilian riders can make a living off their side jobs alone, and earn hundreds of thousands on PBR.

Entering the world finals, the 2nd- and 3rd-highest career earners on the PBR were Brazilian; Alves with more than $6.2 million in winnings and Guilherme Marchi at more than $5.3 million.

Brazilian or not, money wasn't the only thing drawing riders to the sport.

The adrenaline, they said, is more than even Crimber and the Salgado brothers can describe, and that's before the gate opens. When a rider survives eight seconds, the time required to earn a score from judges, that rush is only multiplied.

Crimber was known to break dance on the dirt. Leme, at the World Finals, celebrated by punting his helmet into the air. In Tulsa in July, Thiago Salgado rode a bull named Fiji to a second-place finish.

At the eight-second buzzer, Fiji launched Salgado into the air, and he landed on his knees, popped up and ran to the stage in the center of the arena, where he did a backflip.

"The time in the chute, it's an adrenaline rush, there's nothing compares to it," Thiago Salgado said, with Crimber translating. "You know what you're going to do. You know what you need to do."

Salgado scored a top ride because he did his job - and because Fiji did his job, too.

Salgado had to hold on for eight seconds to get a score, and he also needed the bull to do everything it could to prevent that. And that's the unique combination found in bull riding, a blend of individual competition and head-to-head war: the rider competing with - and against - the bull at the same time.

How high did the bull kick? How vertical was his body? Did he turn enough? These are all things considered by judges.

The best bull in the PBR this year was Woopaa, a 1,600-pound behemoth from the Hookin' W Ranch northwest of Fort Worth. Woopaa bucked off riders before eight seconds 30% of the time, but his average score was 46.7 out of 50, giving riders a chance to win - if they could hold on.

At the PBR World Finals, he scored a 48.75, helping Leme to the highest PBR score ever.

All of that maneuvering is done with the risk brought by the most dangerous sport on Earth.

Crimber retired in 2011. But he lives with his riding career every day, in the limp when he walks, in the stiffness in his neck, in the pain medicine he keeps in the front pocket of his shirt.

And no, he wouldn't change a thing.

The second broken neck, a crack of his C1 vertebrae, would have sent Crimber into retirement in 2008. But he had a young son at home, and he wanted him to see his dad ride.

Crimber eventually quit riding, but he never quit the sport.

Nearly two decades after Crimber came to Decatur, the Brazilian tradition over the last year showed no signs of slowing down. There was Leme's back-to-back world championships and five of the world's top seven riders this year all being Brazilians from Wise County.

And then there was a Decatur teenager who wasn't old enough to compete on the PBR, but who won just about everything else. Last year, he took the Texas high school championship and the National Junior Rodeo Championship. When bull riding returned to the State Fair of Texas this fall, he won that, too, pocketing a $10,000 check.

He grew up around the sport and started riding sheep when he was 6. Crimber said the kid was born to ride a bull.

Long legs, a short torso, long arms, a natural passion for the sport.

Paulo, the cowboy who rode for months at a time with broken bones and torn ligaments, ended up with a cowboy of his own. He learned quickly it was harder to watch than ride.

"Way more [nervous]," Paulo said of watching his son, John. "I never got that bad when I was riding ... You get used to it. We're so proud."

At Crimber's ranch last month, when the Salgado brothers passed the time on a practice steer, they could have only hoped what would happen in the next two weeks.

Neither brother performed their best at the PBR event in Nebraska, the last of the regular season. But they arrived at the PBR's Velocity Tour finals the next week with a chance to make the World Finals. Adriano also had a chance to win the Velocity Tour, the PBR's circuit for up-and-coming riders.

He took advantage of the opportunity.

In his final ride of the weekend, Adriano rode a bull named Grey Smoke for eight seconds. When he got up, he tossed his helmet into the air, thumped his orange vest and hugged his brother, Thiago, who ran onto the arena floor.

The ride scored Salgado 90 points, securing him a win and a $67,000 payday, the biggest of his life.

In his interview afterward, Salgado stood with his brother and thought of his parents and his young son back home in Brazil, and he began to cry.

"It's been a really tough battle for me to be here today," Salgado said, with Crimber translating. "And I owe all of that to my brother, my right arm."