The sites will be in Houston, Dallas and Arlington, officials said. 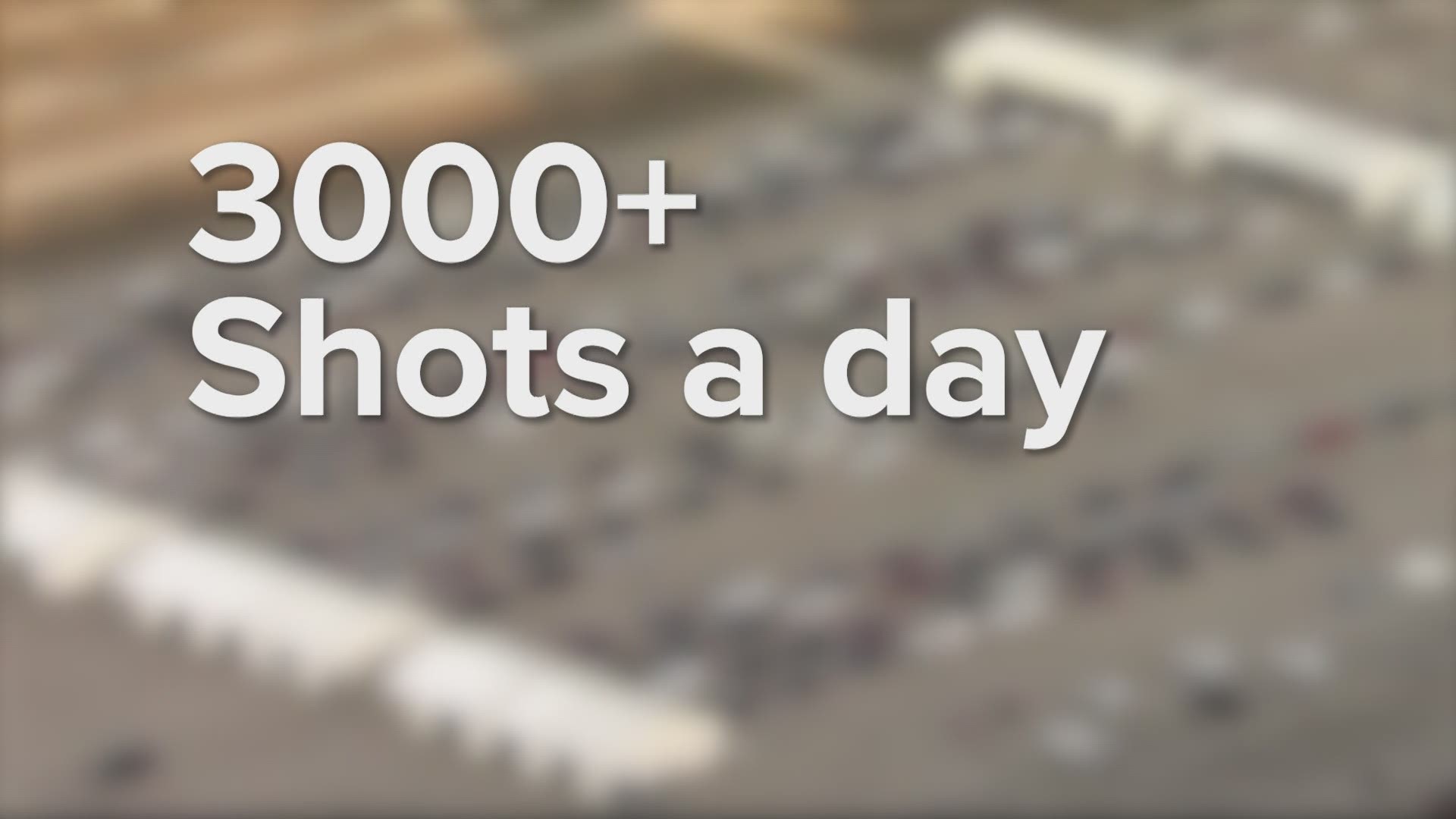 The White House is opening three new major COVID-19 vaccination sites across Texas starting the week of Feb. 22, and two of them will be in the Dallas-Fort Worth area, officials announced Wednesday.

The sites will be able to give out around a combined 10,000 vaccines a day, officials said. Those vaccines are in addition to the weekly allotment that the state receives.

The sites, called Community Vaccination Centers, will be in Dallas, Arlington and Houston.

The Arlington site will be at AT&T Stadium while the Dallas site will be somewhere at Fair Park. Officials have not yet clarified if they will be working with Dallas County's site at Fair Park or creating a separate one at the same location.

Houston's CVC will be at NRG Stadium.

Dallas County Judge Clay Jenkins said the announcement of these sites is "welcome news" and that it will help the county's most vulnerable residents get access to vaccinations.

"These much-needed resources will help us reach some of our hardest-hit communities and ensure that more residents access the vaccine in a fair and equitable manner," Jenkins said.

Federal teams from FEMA will be working with state and local officials to set up the sites and will be primarily staffed by federal employees, White House officials said.

An announcement from Gov. Greg Abbott said the buildout of the three sites was already underway and would be open to eligible Texans starting Feb. 24, with registration details for appointments at the sites yet to come.

"We're talking about probably 3,000 extra vaccines per day here at the Arlington site. And that's 21,000 a week that we weren't going to get. That’s a lot. So we're very excited," Tarrant County Judge Glen Whitley said. “In a matter of about three weeks or four weeks, depending upon which vaccine they bring with them, those second shots are going to start coming, and that's going to double their daily output, I hope.”

The plan is for the sites to run 12 hours a day, 7 days a week and be supported for at least 8 weeks.

Tarrant County's federal site will be set up as a drive-thru. Dallas County officials said they're still working those details out. Dallas County expects to use its own waitlist to figure out appointments, but Tarrant County hasn't made a final decision.

The administration said officials used the CDC's Social Vulnerability Index as one of its main criteria to select the sites to launch the centers, focusing on getting access to the vaccine for vulnerable populations who have struggled with COVID-19.

Tarrant County contracted with UNTHSC to reach out to hard hit, low-income areas missing out on vaccines while affluent communities like Tanglewood and Colleyville have gotten doses.

“All of this is showing how closely local government, state government, and the federal government all work together to get something done," Whitley said.

Fair Park and NRG Stadium both have major transportation lines connecting them with the rest of the surrounding area, another reason the locations were chosen. All three are near "at least three major highways" as well.

"These sites are also central gathering points for these communities where football is much more than a sport – it’s a part of the culture," Abbott's announcement read.

The announcement comes just days after NFL Commissioner Roger Goodell said the league would open up all of its stadiums to be used as vaccination sites.

“The traffic is going to be a non-issue because of the way and the plans that went into creating that stadium and locating that stadium where we did. It's the perfect location," Whitley said about the AT&T Stadium site.

"These mass community sites will allow us to expand access to COVID-19 vaccinations in underserved communities and help us mitigate the spread of the virus," Abbott said. "Thank you to our partners at FEMA for working with the State of Texas to establish these vaccination sites and help us protect our most vulnerable."

There are still questions like if FEMA will take over the current Fair Park vaccinations and how security and storage will be run.

FEMA will be providing the vaccine doses directly, which could mean about 10,000 more doses a day for Texas, a state spokesperson confirmed to WFAA. It remains unclear if there will be any impact to Texas' regular weekly allocation of doses, though state officials did say they would be closely monitoring the new sites to "make real-time decisions to ensure the best utilization of the additional vaccines that have been made available."

Texas is currently giving out around 120,000 doses a day.

Other sites across the region like the Texas Motor Speedway are already giving out thousands of doses a day.

Denton County officials said they would like to be giving out as many as 10,000 shots per day if they have the supply. Around 28,000 Texans were vaccinated at the site in three days alone.

Incredibly proud to see @TxMotorSpeedway in national headlines. In just three days, nearly 28,000 Texans were vaccinated at the Speedway's hub, in partnership with @DentonCountyTX. @TDEM pic.twitter.com/LOCIMZutzK

How to register for a vaccine in North Texas: