Robert Beecham credits Dr. Satyam Nayak with helping him beat COVID-19. When it was Beecham’s turn to get the vaccine, Nayak did the honors. 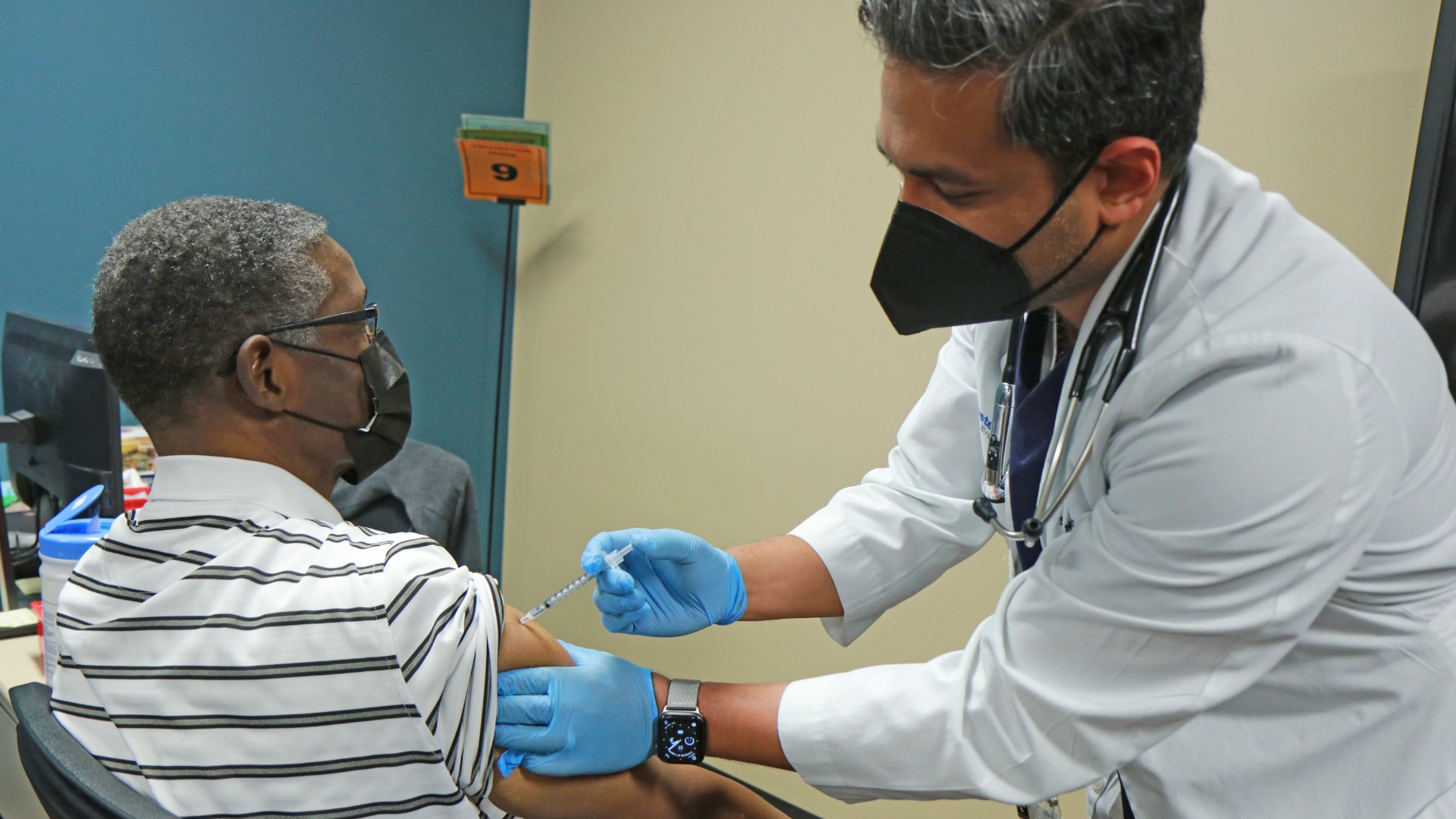 DALLAS — Anyone who walks the halls of Dallas’ Parkland Hospital has felt tremendous pain and loss in the last year.

But amid all the suffering, patients are also surviving.

Robert and Janice Beecham of DeSoto are proof.

Janice, Robert’s wife of 46 years, said she does too. But only a few months ago, their survival was not certain.

They both caught COVID-19 early in the pandemic.

Robert is a two-time stroke survivor.

“I prayed and made peace with God and told him I was ready to come home,” Robert told WFAA during an interview in July 2020.

RELATED: This DeSoto couple battled COVID-19, cancer and chemo and survived them all

Dr. Satyam Nayak was determined not to let that happen.

This patient and doctor formed a friendship over short daily walks around the COVID unit.

While they walked, Nayak could see and feel Robert’s devotion to his wife and deep concern for her health.

Nayak kept Robert focused on going home to Janice in time to celebrate their 46th anniversary.

Nayak even drew up a map of the Beecham's home to show Robert how to safely quarantine at home.

“I’m like, is this guy a doctor or an architect?” Robert said, laughing.

When Robert was discharged from Parkland, he left with his doctor's personal cell phone number.

Robert later learned Nayak took such an intense interest in his recovery for one reason: Robert was his first COVID patient to survive.

The two began texting and talking and a friendship was born.

In late January 2021, Robert texted his friend to say hello.

Nayak responded asking if his friend and former patient had received the COVID-19 vaccine, unaware Robert had an appointment later the same day to get his shot at Parkland.

Nayak went to work behind the scenes and rearranged his schedule to ensure he would be the one giving the Beechams their shots.

A photographer from Parkland captured the moment they saw each other for the first time.

“Oh my goodness,” Nayak said with his arms wide open, holding back tears and a hug.

Before giving Robert his shot, Nayak told him, “You’ve helped me get through this. From the COVID unit to the vaccine. Full circle.”

Janice, who is admittedly a little afraid of needles, said she wants everyone to know how painless the vaccine is and how important it is.

“I’m here to tell everybody it’s a piece of cake,” she said.

She encouraged all Black and Hispanic Americans to take the vaccine.

“I’m thinking about how bad I want to live. You know? How bad do I want to stay here for my family?” she said.

Because Nayak sees patients at their sickest and rarely gets to see them after they improve, he said being face to face with the Beechams was priceless.

“You were just walking so happily and full of life and I could just see you guys together and beaming,” he told them after giving them their vaccines.

“That’s what we were trying to do – to get you guys back together,” he said. “And we were able to do that.”

He said Robert always seems to text him just when it's needed.

“I don’t know how he knows but when I’m having a difficult day, he sends me a text. Those kind words mean everything.”

“I just want to tell the community that we’ve got to be safe, be kind and be like the Beechums,” Nayak said.