District officials are also working on creating a temporary virtual option for students that could cost $100 million if the state legislature does not provide funds. 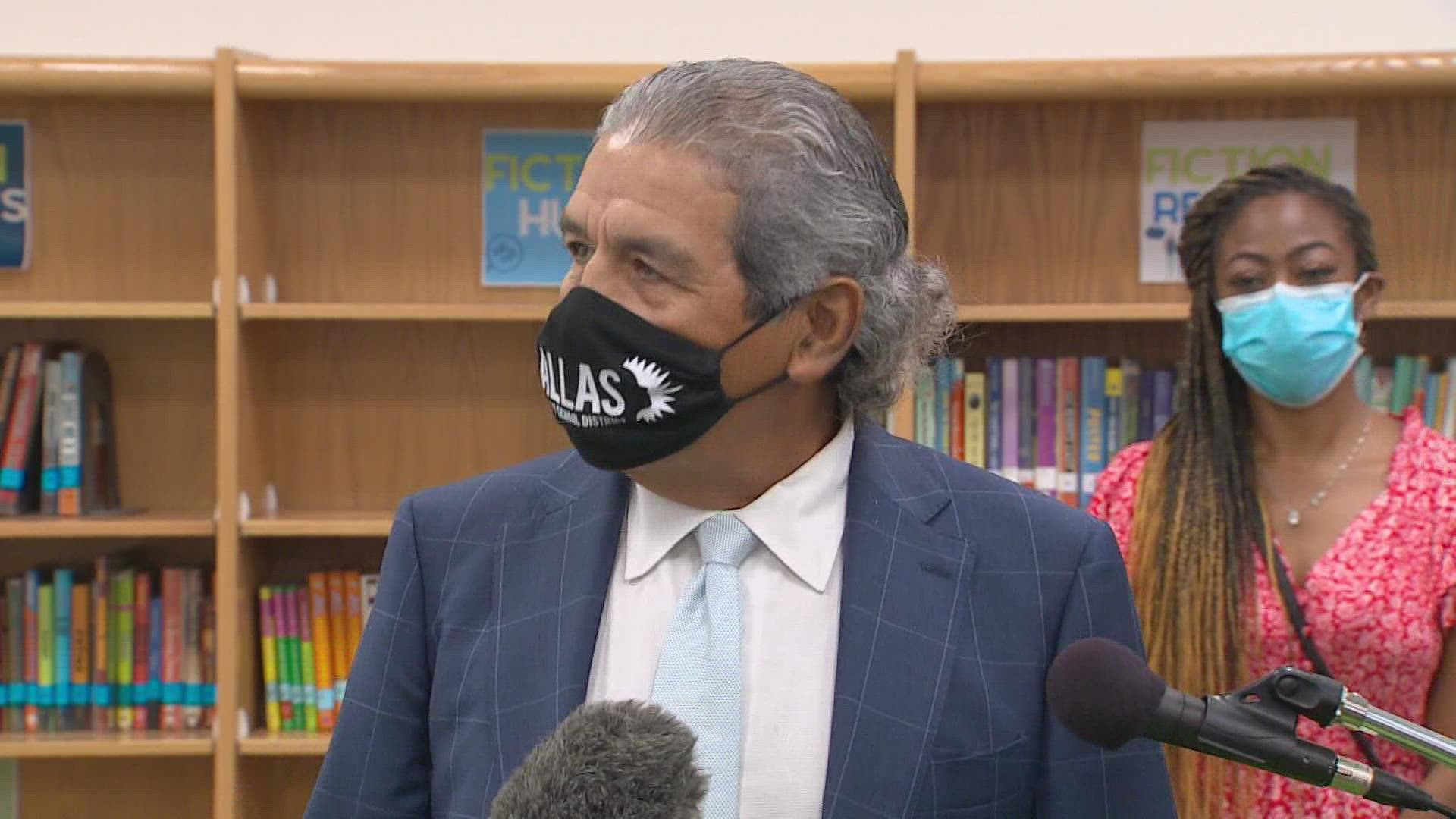 DALLAS — Superintendent Dr. Michael Hinojosa acknowledged Monday the Dallas Independent School District’s mask mandate could now leave them subject to fines as he greeted students and teachers on the first day of school at Prestonwood Montessori.

A temporary restraining order allowed Dallas County Judge Clay Jenkins to reinstate a mask mandate for a little more than a week before it was somewhat struck down by the Texas Supreme Court on Sunday.

RELATED: Dallas ISD says it will enforce a mask mandate until a court orders the district to stop, despite Texas Supreme Court ruling

Jenkins believes the ruling was narrow enough that the court did not fully strike down his order, but rather removed a stay on the governor's executive order, which bans such mandates.

"Unless I receive a ruling requiring otherwise, I will amend my order to remove the possibility of fines on non-compliant businesses but otherwise leave the order in effect," Jenkins tweeted.

The governor’s executive order said organizations enforcing a mask mandate can be fined up to $1,000. Already some fundraising efforts have begun to help violators pay the possible fines they are facing.

“We know that as of now since the county judge’s order is null and void, now I am susceptible to fines,” said Hinojosa. “I do not know if it is a one-time fine or multiple fines, but I’ve had a lot of people volunteer to pay the fine for me.”

Jose Menendez, a Texas Senator from San Antonio, tweeted over the weekend he was starting a legal defense fund for school districts that choose to defy the governor’s order.

“The president said he was proud of us for making this opportunity available to our students. He thanked me for having the courage to stand up for our students and our community.”

Some parents have threatened to sue the district because of the mandate, according to Hinojosa, who also said students who come to school without a mask will be separated from the rest of the class.

“We are going to be nice but firm," Hinojosa said of dealing with those who do not wish to wear a mask. "We are going to ask them to comply and give them a mask. If they don’t, we’ll ask them to leave and if they don’t, then we will have a place for them separated from everyone else. We worked on this protocol all week without principals because we know someone is going to challenge us.”

District officials are also working on creating a temporary virtual option for students. If the state does not provide additional funding for such options, the district could need $100 million to cover costs for that option, Hinojosa added.