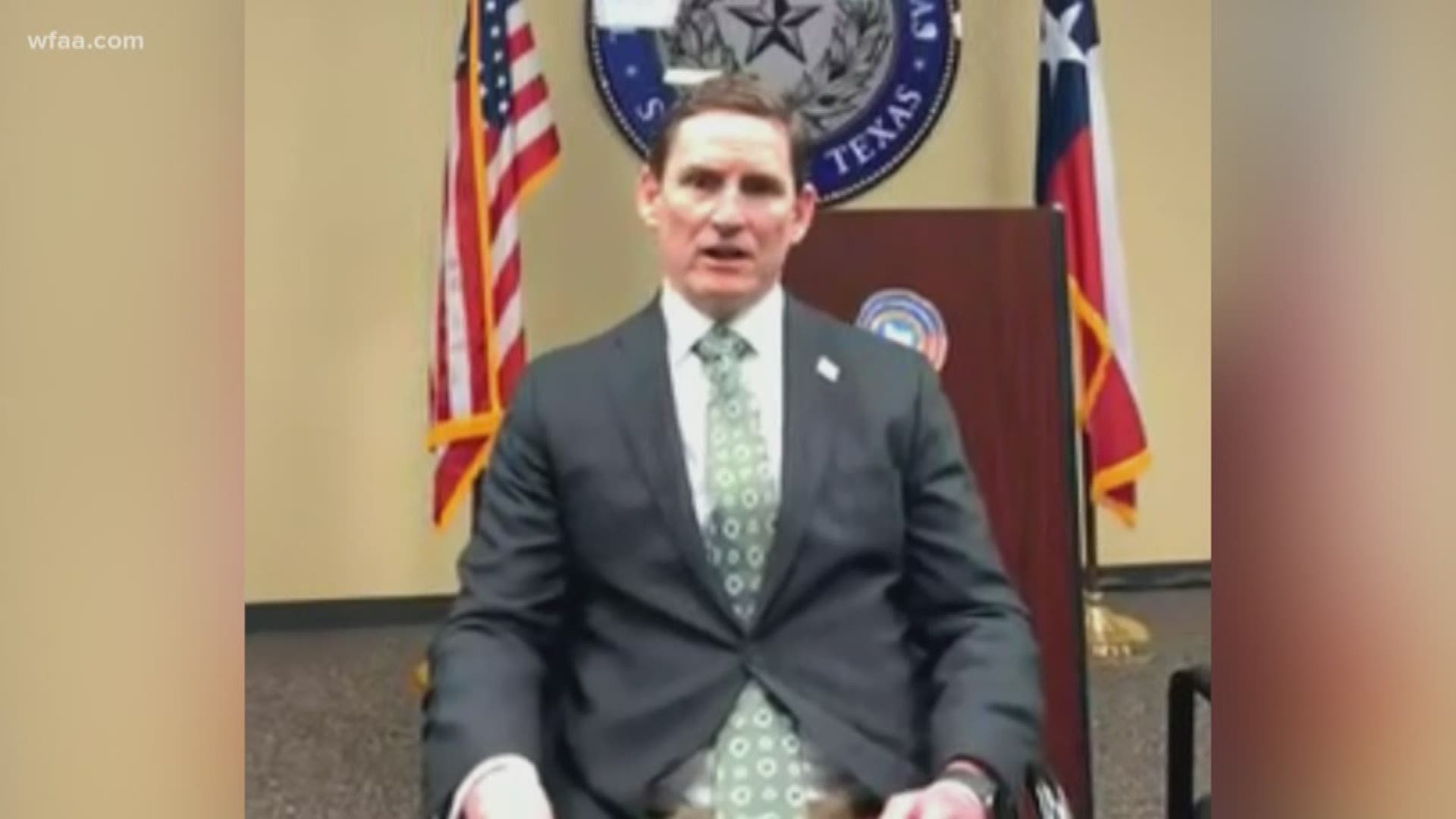 A Dallas middle school student has tested positive for the novel coronavirus, according to school officials.

A district spokesperson confirmed Tuesday that the child attends J.L. Long Middle School in Lakewood. Officials did not release details about how the student contracted the disease.

The district announced Monday that all schools will remain closed indefinitely in response to the COVID-19 pandemic.

Tarrant County officials on Tuesday confirmed that its first case of community spread of the novel coronavirus was in a healthcare worker. A second case has been confirmed in Denton County. It's believed to be travel-related.

Dallas County Judge Clay Jenkins said testing data is often days behind in showing the spread of the disease.

"The situation is more widespread than we're able to show you right now," Jenkins said.

Both the City of Fort Worth and the City of Plano have joined other North Texas and ordered all restaurants and bars to move to drive-thru, takeout or delivery-only service.

Mayor Betsy Price made the announcement Tuesday afternoon, about 24 hours after city leaders issued a mandatory reduction in occupancy limits for businesses, cutting down allowed occupancy by 50%, or no more than 125 individuals, whichever is less.

A test confirmed that an elderly Arlington man, who died Sunday, had COVID-19, according to the man’s family and the Tarrant County Health Department.

Pat James, 77, underwent testing for COVID-19 Saturday, a day before he died. His is the first confirmed death related to the novel coronavirus in Tarrant County.

Ellis County confirmed its first case of COVID-19 on Tuesday. A Maypearl woman in her 70s went to the hospital to test for a stroke and started to exhibit symptoms of COVID-19, so she was given a test for the virus, a news release from Ellis County said Tuesday. She has no recent foreign or domestic travel history, and health officials are notifying anyone who may have come into contact with her.

She and her family will be isolated at home and monitored by DSHS, the news release said.

Also Tuesday, Ellis County capped public gatherings at 50 people and urged residents to refrain from non-essential community gatherings. This does not include restaurants, grocery stores, retail stores and other essential services, the news release said.

The Rev. Dr. Robert Pace, the rector of Trinity Episcopal Church in Fort Worth, was released to his home on March 11, according to a statement from the Episcopal Diocese of Fort Worth. His wife, the Rev. Dr. Jill Walters, is on self-quarantine at home and has tested negative, the statement said. She has no direct contact with her husband.

Father Pace remains in isolation in a bedroom at his home. He said he is "feeling better and getting stronger every day," according to the statement.

The two Paces are communicating by cell phone, with meals left at the door to prevent contact, the statement said.

They are checking in regularly with the doctors supervising his care.

A day after the City of Fort Worth said it would only order a reduction in service at restaurants and encourage residents to order takeout instead of dining in — but would not order businesses to close — Fort Worth Mayor Betsy Price said Tuesday the city is moving to tighten restrictions on businesses in the next 24 hours.

All bars and restaurants will be take-out and delivery only.

The business restrictions are more in-line with what the City of Dallas and Dallas County has done, including ordering all bars, lounges, taverns, gyms and theaters to close.

A second confirmed case of COVID-19 has been confirmed in Denton County, health officials said.

The Prosper resident, a woman in her 50s, had recently traveled, officials said.

She is isolated at home to prevent the spread of the disease.

The county has issued a disaster declaration to try to prevent community spread.

On Tuesday, Gov. Greg Abbott activated the National Guard to be ready to assist in the response to the novel coronavirus.

Abbott said the state is receiving 15,000 tests from the Federal Emergency Management Agency.

"By activating the Texas National Guard, we are ensuring Texas is prepared as we continue to mitigate the spread of COVID-19," Abbott said Tuesday. 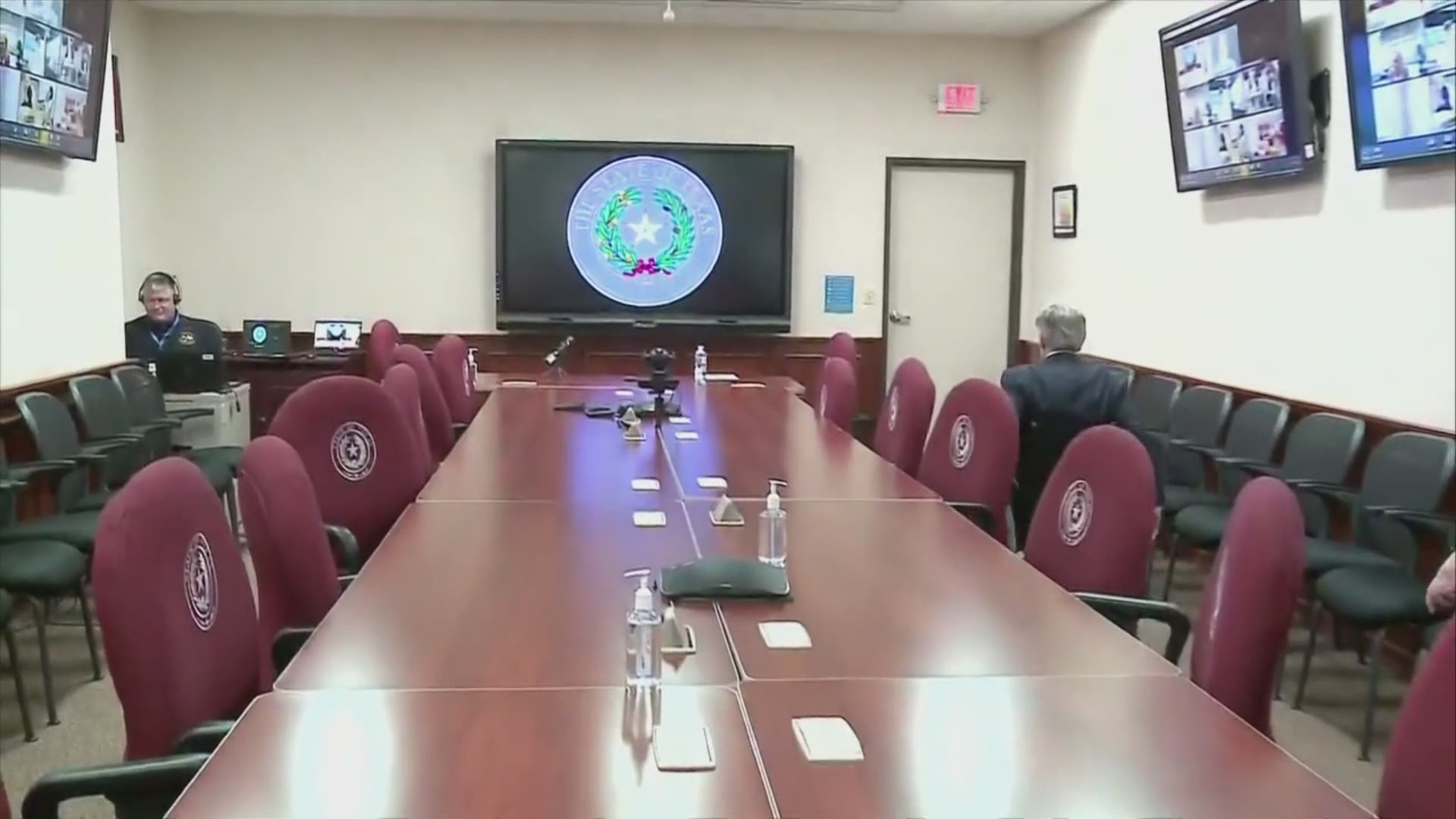 Five of the cases are a result of community spread, health officials said.

One person had recently traveled internationally, and the other two had close contact with people already confirmed to have COVID-19, according to officials.

Jenkins, the Dallas County judge, said it is important that people restrict their contact with each other.

"We must replace selfishness with sacrifice if we are to protect our seniors and most vulnerable among us," Jenkins said.

Three of Dallas County’s new confirmed cases are hospitalized in critical condition. And two of those are young: a woman in her 20s and a man in his 30s. The third critical patient is a man in his 60s. None of them had underlying health conditions.

According to Jenkins, all three critical cases are a result of community spread.

The four people not hospitalized are self-isolating at home.

McKinney Mayor George Fuller will limit restaurants and bars to 50% of their normal capacity and enforce social-distancing guidelines through Thursday.

Starting Friday, customers will not be allowed to dine-in at locations in the city.

"The health and safety of our residents is most important," Fuller told WFAA.

In Tarrant County, health officials say they have not determined what contact led to the person's contraction of the disease but say the person was seeing many sick people.

"We can't tie it to one specific person. We're working through that list... but it's hard to find a lot of times," Tarrant County Public Health Director Vinny Taneja told county commissioners on Tuesday.

The person is a Grand Prairie resident who had no known exposure to another person with COVID-19 and no recent travel history, health officials said Tuesday.

It was "the first case of presumed local transmission" in the county, according to officials.

The person has been isolated at home since they developed symptoms.

The health department has been testing people but is not set up to be a diagnostic lab, Taneja said.

The health director called the case of community spread a "significant trigger event for decision making."

The county lab is "pinch-hitting" while the testing infrastructure is being developed. They have tested 164 samples and found three positives.

Texas restaurant industry could lose up to 500,000 jobs

Analysts predict up to 500,000 jobs could be lost in the Texas restaurant industry after leaders in Dallas and Harris counties decided to limit public access to bars, restaurants and other entertainment businesses on Monday.

About 250,000 people work in the restaurant industry in Dallas County, according to the Texas Restaurant Association, and about 300,000 people in Harris County.

The industry group also predicts 25% to 30% of independent restaurants will be unable to weather the COVID-19 pandemic as it continues to affect business.

500,000 or more jobs could also be lost in other parts of the food supply chain as a result, TRA estimates.