'I love you and I miss you very much': Dallas native writes heart-wrenching note to wife before dying of COVID-19 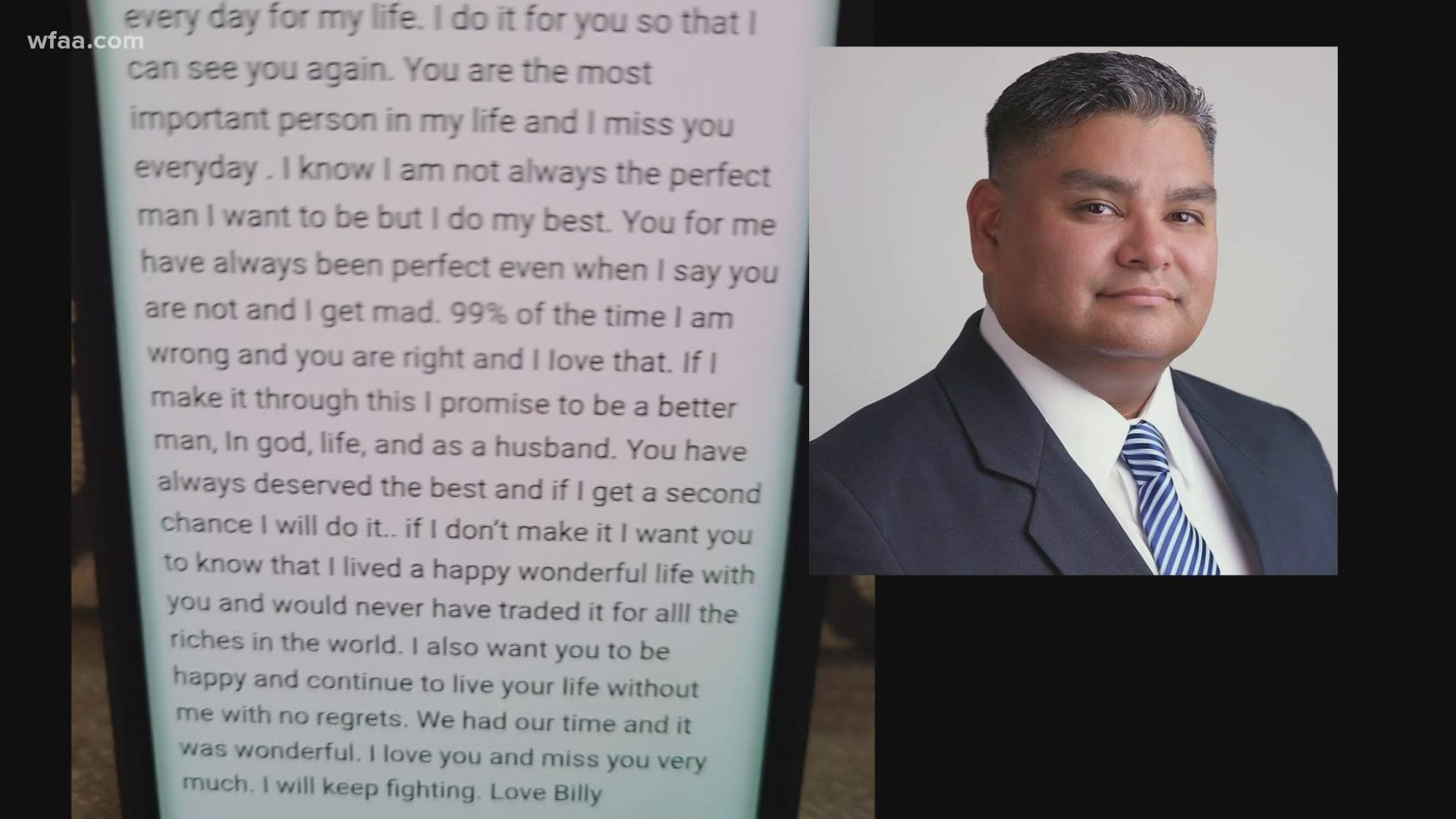 DALLAS, Texas — A Dallas native and Thomas Jefferson High School graduate is one of the latest casualties in Texas' fight against COVID-19 and his final moments won't ever be forgotten by his wife of more than two decades.

Loredo was born in Dallas and graduated from Thomas Jefferson High School in 1993. He's since been living in Edinburgh as an attorney.

Credit: Pete Loredo
Billy Loredo poses for a photo for his firm.

His brother, Dr. Pete Loredo, is a surgeon in the Grapevine area.

The two are beloved in their respective communities and are an impeccable example of turning a tough upbringing into incredible careers.

But in this pandemic, COVID-19 does not discriminate when choosing a host.

His brother and wife told WFAA that they believe the 45-year-old likely got the virus from his secretary who unknowingly had it.

The two worked in adjacent offices and Loredo always wore a mask when possible according to his brother.

"She came in and said she felt like she had some allergies," Pete Loredo said.

Sonya Kypuros, Loredo's wife of 21 years, was also positive but was more concerned about her husband.

"He started to have mild symptoms. Like he would have a fever at night, but not all day long. For a week he actually seemed OK. But, it just turned quickly south from one moment to the next," Kypuros said.

"He woke up early on Thanksgiving telling me that he was having breathing problems."

Loredo was admitted to an area hospital.

"For two weeks he was just trying really hard. He was trying his hardest to not be put on a ventilator," Kypuros said.

Eventually, Loredo's condition worsened and doctors decided that he needed to be intubated.

Kypuros couldn't be in the hospital for that moment, so Loredo FaceTimed her.

It's a moment Kypuros teared up talking about.

"It's just awful that I couldn't be there to hold his hand, and that he was fighting there for his life by himself."

His brother was healthy and had no underlying medical conditions.

"I don't know how this virus chooses or doesn't choose its hots to cause the pathological damage that it does," Pete Loredo said.

"If it finds the right victim it is a killing machine."

Before Loredo passed away he wrote a note to his wife and it is tragic to read.

In some ways, Kypuros was happy her eyes made their way to it.

But on its face, it is a sobering reminder that COVID-19 still stands in the shadows behind a nation that is administering its first round of vaccines.

Below is Loredo's note in its entirety:

"I want you to know that I am fighting very hard every day for my life. I do it for you so that I can see you again. You are the most important person in my life and I miss you everyday. I know I am not always the perfect man I want to be but I do my best. You for me have always been perfect even when I say you are not and I get mad. 99% of the time I am wrong and you are right and I love that. If I make it through this I promise to be a better man, in God, in life, and as a husband. You have always deserved the best and I get a second chance I will do it. If I don't make it I want you to know that I lived a happy wonderful life with you and would never have traded it for all the riches in the world. I also want you to be happy and continue to live your life without me and with no regrets. We had our time and it was wonderful. I love you and miss you very much. I will keep fighting. Love, Billy."

Kypuros is using her husband's last message to her as a means of showing people that this virus is still alive and among us.

"I think he was trying to give me permission to be happy without him," Kypuros said, crying. "That was hard to read. But he took care of me and took care of everyone so I'm not surprised he wrote that."