Two inmates named in the lawsuit have already tested positive for COVID-19 and claim they have not received the necessary medical attention. 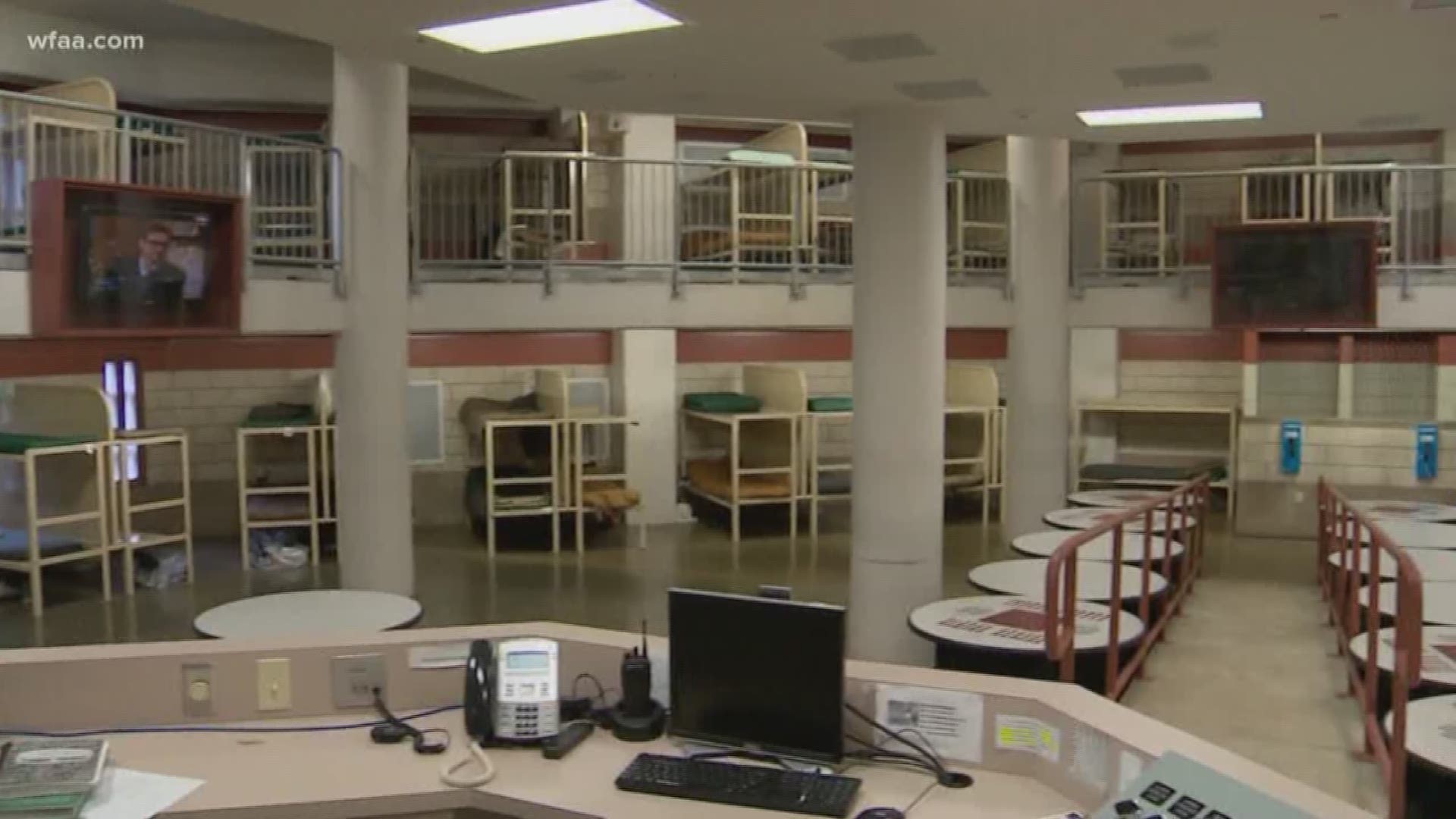 A group of inmates at the Dallas County jail filed a federal lawsuit Thursday to demand immediate release for inmates who are over 50 and considered “medically high-risk” for the coronavirus.

The suit also calls for the jail to implement social-distancing guidelines and provide COVID-19 tests at no cost.

Two inmates named in the lawsuit have already tested positive and claim they have not received the necessary medical attention, according to court records.

The lawsuit claims the jail is not protecting personnel or jailers. It calls for 6-foot social distancing in the jail, a safety plan to prevent further spread of coronavirus, free cleaning and sanitizing solutions, coronavirus testing for inmates and jail employees, providing daily coronavirus information, medical isolation space, and waiving copays and charges for those with coronavirus-like symptoms.

County officials have said they are cleaning the facility and keeping inmates who have tested positive in isolation.

"Under advice from legal counsel, the Sheriff’s Office does not comment on pending litigation," officials said in a written statement.

The federal lawsuit claims the jail has "failed to protect the present population of detainees, employees and the larger community against the racing spread of COVID-19."

At a news conference Tuesday, Dallas County Judge Clay Jenkins said there were concerns about the spacing of inmates and that there were "several people looking at that to keep jailers and inmates safe."

In March, he suggested inmates could be moved to a jail at the George Allen Courts Building but said Tuesday that staffing is an issue.

Attorney Alison Grinter, who helped file the lawsuit, says time is not on their side. She says many inmates can be released under supervision like ankle monitoring

"Nobody really anticipated something this virulent, something this contagious and this deadly to ever happen in such a small place like this and we are not set up for it,” Grinter said.

"A lot of us are being released. A lot of low-level offenders, therefore it will impact the public as well if we are not being taken care of,” inmate Brent Wilcox told WFAA. 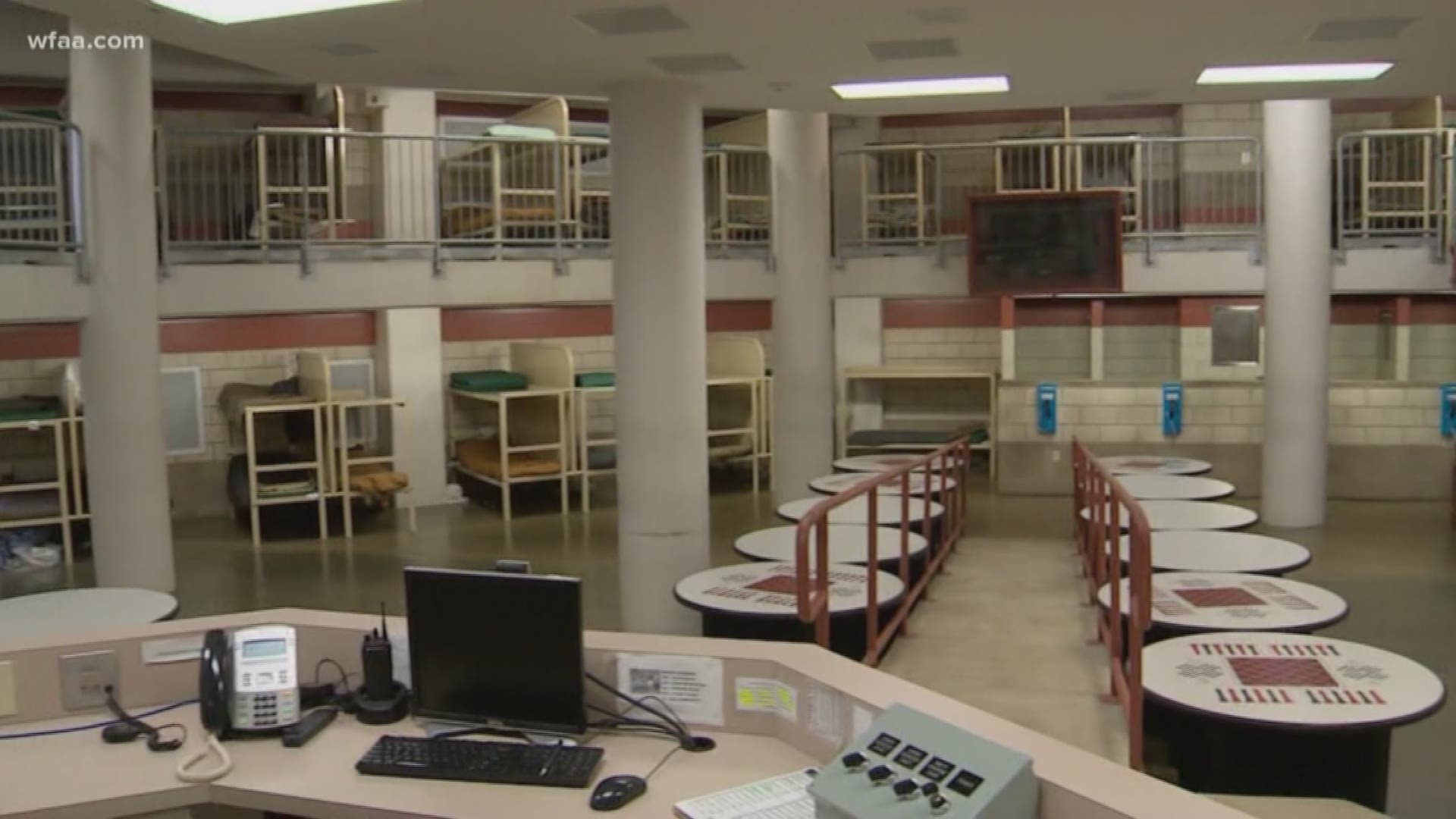 The jail does not test detainees during intake, detention or upon release, the lawsuit claims.

The release of the medically-vulnerable over 50 years old is necessary, the lawsuit says, to prevent harm from those at the jail, but also to facilitate social distancing guidelines to reduce transmission of coronavirus.

Of the nine inmates named in the lawsuit, some are showing coronavirus-like symptoms but do not have $10 in their accounts to ask for a nurse, the lawsuit says. The inmates in the lawsuit have various medical conditions, ranging from Hepatitis C to high blood pressure to cirrhosis of the liver.

The inmates claim that jail employees have not told them how to prevent the spread of coronavirus. They say they have used the same soap for a week, which is also shared with about 40-60 other inmates in their pod. They say they have worn the same clothes for more than a week.

The inmates in the pods use the same phone and video conference hardware.

The lawsuit claims the jail is operating on a short staff. The inmates also claim they have been denied commissionary purchases since late March.

Oscar Sanchez, 28, has not been tested but the lawsuit says he may require immediate medical attention. He said at one point another man in his same jail pod spent three to four days vomiting before he was removed from the pod, the lawsuit says.

Jailers ordered another inmate to clean the sick man's bunk and get his belongings. The inmate was not given gloves nor a mask while he was cleaning the bunk, the lawsuit says.

The inmates were then moved to other pods and Sanchez says jailers did not check the inmates' temperatures.

Sanchez says he has asthma but cannot see a doctor unless he files a sick call and pays the jail, according to the suit.

He says on April 6 was the first time the jail told him anything about how to prevent the spread of coronavirus. He asked to be tested but has to pay $10. He also claims the jail denied him grievance forms, the lawsuit claims.

"I don't know what these people want you to do. Die first?" the lawsuit says a jail guard told Sanchez.

Marcus White, 37, has tested positive for coronavirus. On March 21, he had symptoms of coughing, congestion, body aches and diarrhea. He says he was left in the dorm with 60 other men for four more days before he was moved to a single-cell dorm. He says the jail didn't tell him how to prevent the spread of the virus -- he learned that on the news. He says he was denied a shower for a week and has worn the same clothes for more than two weeks, according to the lawsuit.

Tesmond McDonald, 32, tested positive for coronavirus. He has asthma and high blood pressure which he both takes medication for. He developed body aches and had trouble catching his breath. He started over-using an asthma pump he was given. The nurse who took his oxygen levels said they were dangerously low. He went to the infirmary and tested positive for coronavirus a week later, according to the federal suit.

"On one occasion, Mr. McDonald asked to go to a doctor because he could not breathe -- he thought he was going to die," the lawsuit says. "They told him they can’t do anything about it and that he needed to wait until tomorrow. Even then, he still never saw a doctor."

Roger Morrison, 49, has not been tested, but feels nauseated and is considered high risk due to high blood pressure, cirrhosis of the liver and other medical conditions. Social distancing in the pod is impossible, he says. “He does not want to sit in jail and die,” the lawsuit says.

Terry McNickels, 58, previously had an operation kidney cancer and now has one kidney. He says his doctor told him now it is harder for him to fight infections so he must wash his hands a lot. He has not been provided personal protective equipment and says jailers have not given him information on how to stay safe, according to the lawsuit.

The pod where he lives is impossible to social distance and he asked for a face mask but was denied. He was booked into jail on a parole violation.

"He washes his hands a lot, but he is very afraid," the lawsuit says.

Paul Wright, 48, has not been tested for the coronavirus but he has hepatitis C. He is awaiting transfer to the Texas Department of Corrections where he would be eligible for parole, but coronavirus has ended pickups from the jail. He says one of the guards was exposed to three inmates who were positive for coronavirus. The inmates she interacts with, including himself, do not have protective gear, the lawsuit claims.

Keith Baker, 25, has severe asthma and has not been tested or coronavirus but has a sore throat and cough. He is housed in the same wing as other people who have tested positive for the novel coronavirus. He says he was given a mask after he asked for one, according to the lawsuit.

Marcelo Perez, 43, has not been tested, as of the date of the lawsuit, but is showing symptoms and wants to be tested. He has high blood pressure and is diabetic.

Jose Munoz, 37, has not been tested. He is awaiting transfer to a drug treatment facility, but can't be moved due to the coronavirus protocol. He says he and other jailers have been sharing the same phones and their beds are too close to social distance, according to the lawsuit.