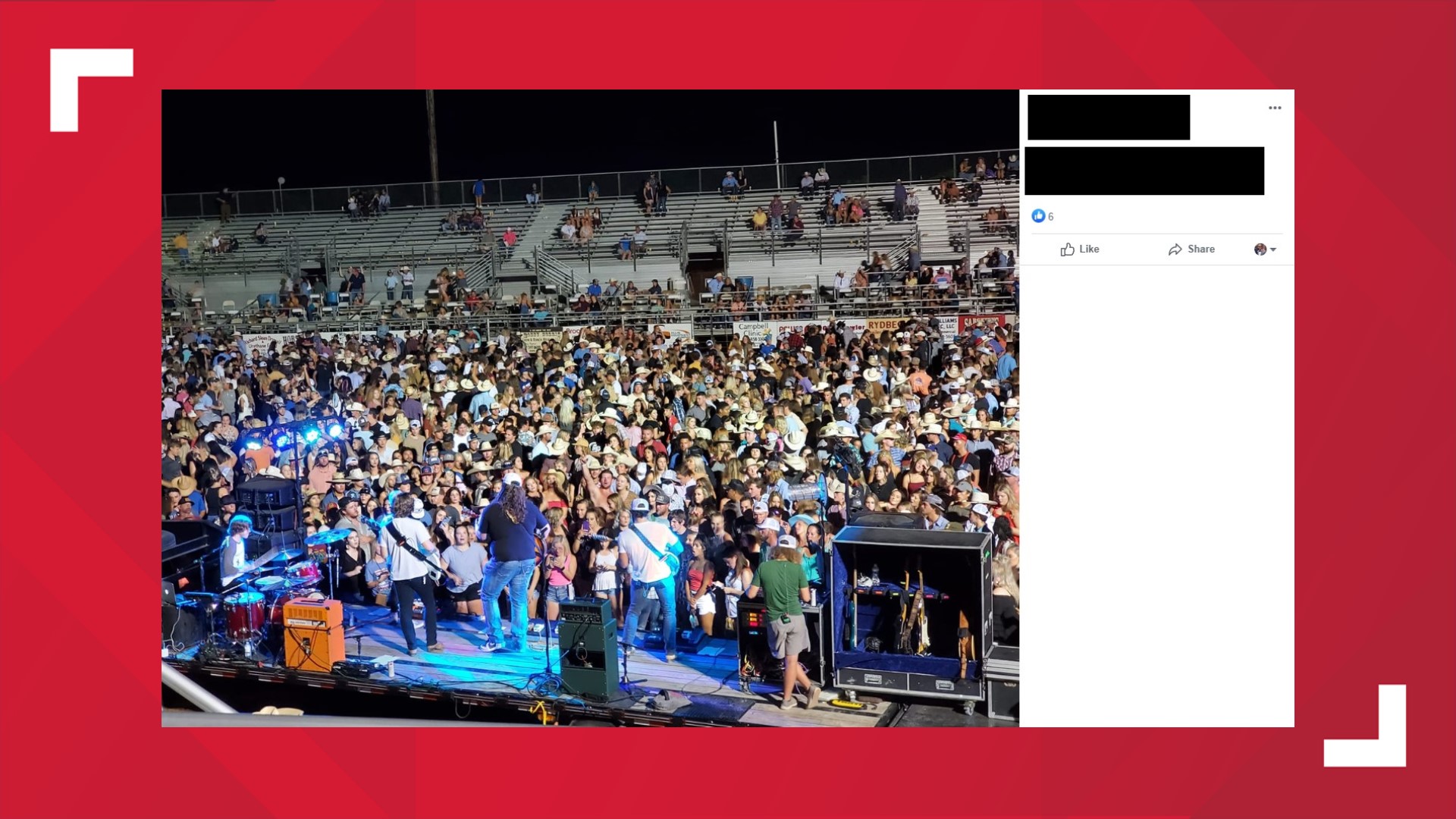 WEATHERFORD, Texas — When hundreds didn't social distance or wear masks inside the Parker County Sheriff's Posse Frontier Days and PRCA Rodeo, the county's top official failed to shut down the multi-day event like he said he would.

Judge Pat Deen signed off on the rodeo on July 7, when he ruled that outdoor gatherings of up to 100 people are allowed.

Deen said he was confident that the rodeo could be held in a safe manner if masks were handed out at the door and fans were spaced out.

But when WFAA showed Deen a photograph of the post-rodeo concert Thursday night (one was held each evening during the five-day event) it drew his ire.

The photo showed dozens of people huddled together on the floor of the arena for Chris Colston's show. It was hard to find any masks in the crowd either.

"That was not in compliance with what my office or the governor's office ordered," Deen said. "If that photo was from the event, that's not in accordance with what I have asked to be enforced."

Deen continued to admonish the photo to WFAA by phone.

"Seeing that density of people in one gathering, I would have preferred there to be more spacing," Deen said. "It's more than what I'm comfortable with."

With two more nights of the rodeo left, Deen made a pretty strong vow to WFAA that he would end the event if he didn't see better spacing and people wearing masks.

"I will not tolerate putting people at risk when there's a governor's order in place," Deen continued. "You pack that place with no spacing and there are no masks whatsoever, and that's an absolute total blatant disregard...then we should shut it down."

But events on Friday and Saturday night weren't canceled despite photos WFAA publicly found on social media that cross the line that Deen established.

In the photo above, Josh Ward can be seen playing to a large crowd Friday night after the rodeo's events were finished.

Credit: PUBLIC FACEBOOK USER
Country music artist Kolby Cooper plays to a large crowd at Frontier Days. Few if any are wearing masks in the mass of people.

Another photo found online shows artist Kolby Cooper playing to another packed house. Zero distancing and not a lot of masks found in the crowd.

When WFAA followed up with Deen on Monday and asked him about the photos and his promise to shut down the event, he didn't do an interview and only sent WFAA the following statement:

"As we became aware of the issues of some rodeo attendees being non-compliant, we put into place increased safety considerations to enhance protection. Additional signage was added at the entrance and throughout the event center, masks continued to be handed out to every attendee, additional hand sanitizing stations were made available in high traffic areas, public announcements increased in frequency, additional fire and safety personnel, as well as the emergency management coordinator, was on-site to help ensure compliance, and an additional 6,000 square feet of spacing was added for individuals to social distance. Despite our best efforts, many people at the rodeo chose to disregard the safety measures that were put into place."

Medical City Weatherford, the only major hospital in the city, sent WFAA the following statement when a spokesperson was shown the photos.

"In order to maintain a safe environment of care, protect our patients, and our labor force in the face of this growing pandemic, it is vitally important that our communities practice scientifically proven methods to slow the spread of COVID-19 by social distancing, hand washing, and wearing masks."

The chairman of the rodeo, Rick Wilson, did not respond for comment by the time this story was written.