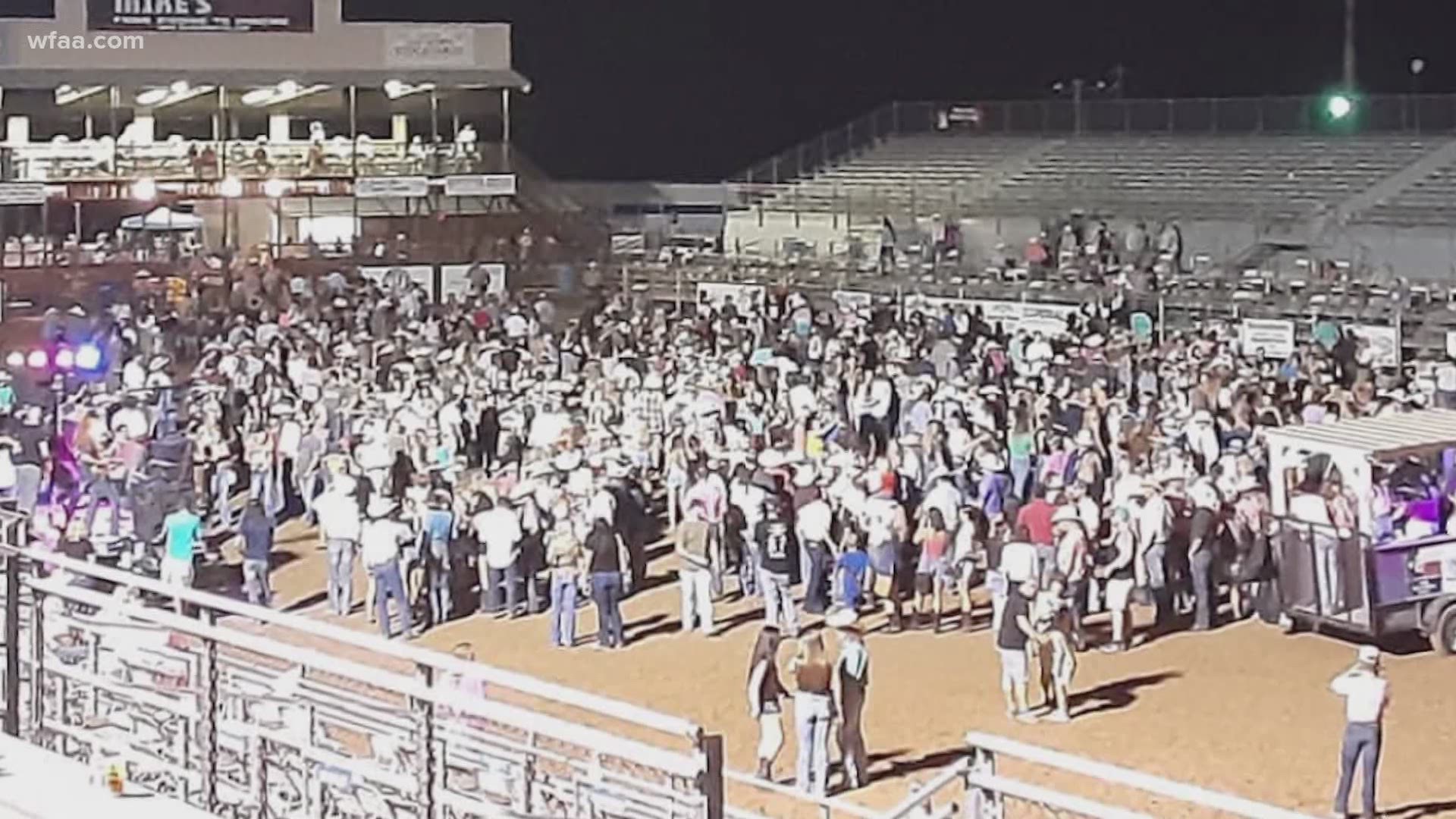 WEATHERFORD, Texas — While Texas faces a fast-moving COVID-19 outbreak, a beloved rodeo in Weatherford has been going strong since Tuesday. And even though it's outside, a majority of patrons appear to not be wearing masks or social distancing.

It got a major green light from Parker County Judge Pat Deen on July 7, when he ruled that outdoor gatherings of up to 100 people are allowed.

The governor's recent orders also mandate masks for outdoor gatherings when six feet of distance is not feasible.

Judge Deen told WFAA that he was working in coordination with Commissioner Larry Walden to allow the event to continue and keep patrons safe.

On June 15, the county's active COVID-19 cases were estimated to be 40 by the state.

As of July 9, not even a month later, that estimation is at 347, which is a 767.5% increase. Luckily, the county has reported only one fatality.

The county's safety plan to have the event involved spacing out crowds during rodeo competition and making masks available at the doors.

Credit: PARKER COUNTY
Employees are seen giving out masks at the rodeo. A banner even says 'Masks/Social Distancing Required.'

A disclaimer at the entrance even reads that patrons are entering the venue at their own risk and that the facility is not responsible for the spread of infectious diseases.

Credit: PARKER COUNTY
A photo of the rules at the entrance of the rodeo.

Deen said that the county ordered at least 2,000 masks to be given out.

"We also had an additional several thousand more masks available if we expected more to come," Deen said.

"There was no reason to kill the event when we can take precautions to be safe and continue on with the event."

There are a number of photos on the Posse's Facebook page that do show crowds spaced out in clusters during the rodeo, but WFAA found very few people wearing a mask.

What's even more startling, public posts on social media show zero social distancing at the post-rodeo concert that is held every night.

One photo shows a massive amount of folks watching the concert in the middle of the arena.

Deen said that he hadn't seen the photo until WFAA showed him.

There are other public photos on Snapchat and Instagram that show patrons in the stands sitting close together without masks.

"That was not in compliance with what my office or the governor's office ordered," Deen said. "If that photo was from the event, that's not in accordance with what I have asked to be enforced."

The city manager of Weatherford, James Hotopp, and the commissioner of the rodeo, Rick Wilson, didn't respond for comment when WFAA reached out to them.

Deen told WFAA that he would work with commissioners and rodeo coordinators to resolve apparent safety issues.

"Seeing that density of people in one gathering, I would have preferred there to be more spacing," Deen said. "It's more than what I'm comfortable with."

Saturday night is the last day for the rodeo.

Deen said he would ensure that better monitoring occurs and even added that he would shut the event down if social distancing or proper mask-wearing isn't adhered to.

But he said he's confident it won't get to that point.

"What we're going to do is tighten it up and make sure that there won't be a second photo like the one you showed me," Deen said.

"I will not tolerate putting people at risk when there's a governor's order in place," Deen continued. "You pack that place with no spacing and there are no masks whatsoever, and that's an absolute total blatant disregard...then we should shut it down."