Last names beginning with A to L can access the trail on Thursdays and Saturdays; M through Z can access on Fridays and Sundays 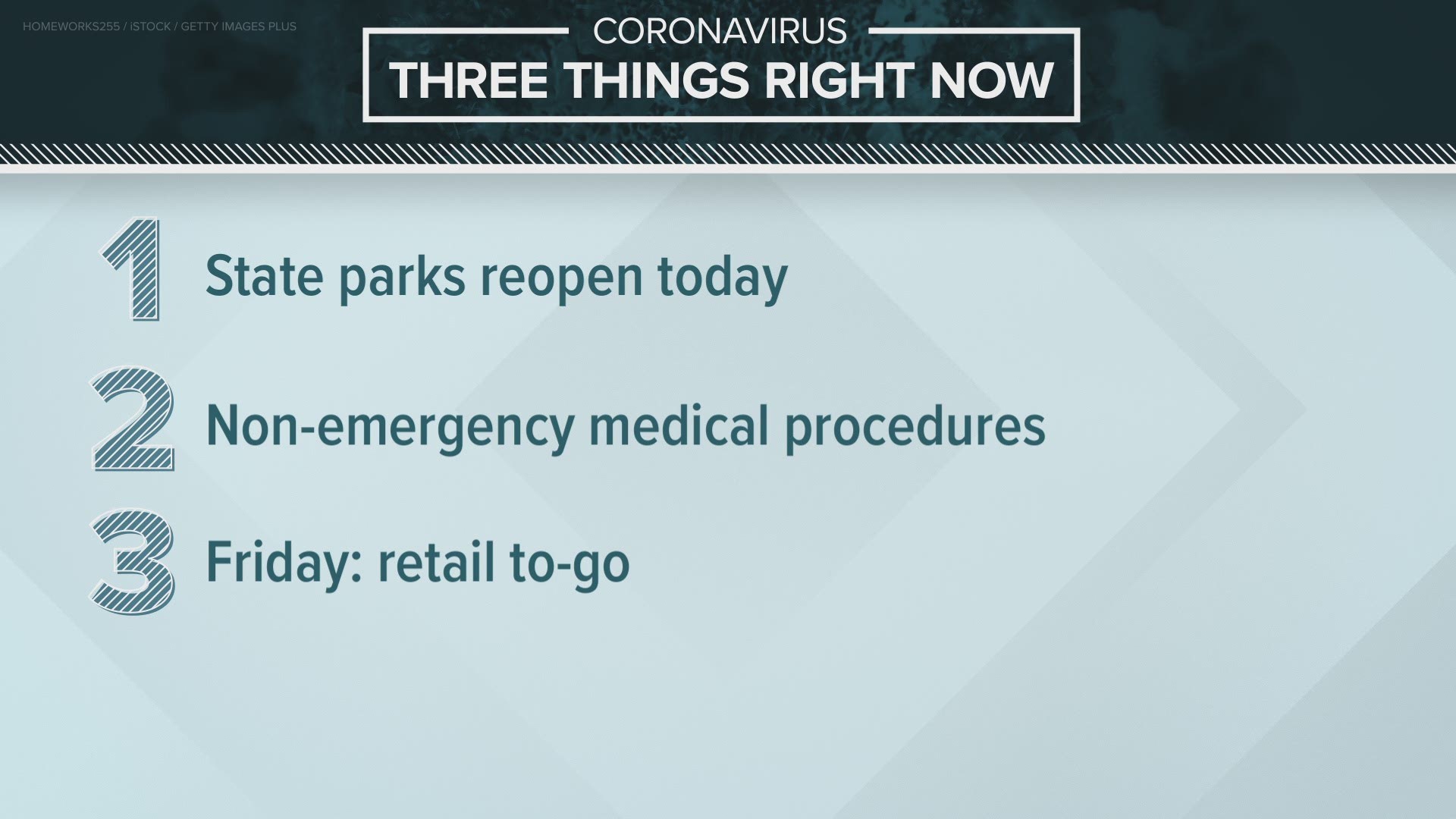 Texas will begin to gradually reopen this week after Gov. Greg Abbott announced on Friday that certain sectors would be allowed to operate again under certain social distancing measures.

State parks have already reopened to the public, though certain requirements will still need to be met. Visitors will be required to have their faces covered and be in groups of no more than five people while maintaining six feet of distance from others.

Restrictions for non-essential medical procedures will be loosened on Wednesday, allowing for some surgical procedures to resume. And on Friday, retailers will be allowed to offer "to-go" services for their goods.

The reopening process comes just as Texas hit its projected peak in cases on Sunday, according to Baylor College of Medicine dean and infectious disease expert Peter Hotez, M.D.

But the state has likely not yet hit the peak number of deaths from the disease, a model from the University of Texas at Austin shows. The state is instead likely to see death tolls rise for the next week to two weeks before it reaches that peak.

Fort Worth Mayor Betsy Price to be tested

City of Fort Worth officials confirmed that Mayor Betsy Price will be tested for COVID-19.

Price is quarantining at home after someone she has been in close contact with tested positive, according to a video message from Price posted online. She does not have any symptoms, city officials confirmed.

Price has served as Fort Worth's mayor since she was elected in 2011.

RELATED: Fort Worth mayor self-quarantines after being in 'close contact' with COVID-19 positive case

Beginning Thursday, Dallas Parks and Recreation will be employing new restrictions to try and decrease the foot-traffic volume on Katy Trail on days of the week that tend to be busier.

Monday through Wednesday will still be normal access, open to everyone. Anyone with a last name beginning with letters A to L will get access to the trail on Thursdays and Saturday, while those with last names fall in the second half of the alphabet should use the trail on Friday and Sunday.

The city is relying on people's "voluntary compliance" and officials, like park rangers and officers, will not be at any checkpoints to check licenses.

Here are images from WFAA cameras that were at the park Monday afternoon:

The city closed all parks over the Easter weekend to limit the possibility of exposure and has kept playgrounds, courts, dog parks and other gathering areas off limits, but has otherwise kept trails open and allowed open-air use of park spaces.

The City says residents are encouraged to visit their local parks, which tend to be less trafficked than Katy Trail.

Two COVID-19 testing sites in Dallas County will now be available to all grocery and big box store employees, as well as all other essential workers, regardless of whether or not they have symptoms, Dallas County Judge Clay Jenkins announced Monday.

Those who are in other high-risk groups, including those over the age of 65, with underlying health conditions or first responders and health care workers, also will be able to get tested with or without symptoms.

Anyone else will still need to have a fever of at least 99.6 to get the test.

The testing sites are both in Dallas. They are located at:

Dallas County has confirmed 84 new cases of COVID-19, bringing the countywide total to 2,512 since testing began.

Lower case counts have been reported on Mondays, something county health officials say may be due to private testing facilities being closed over the weekend.

There have been 60 deaths linked to the new coronavirus in Dallas County, officials have said. Of those, 38% have been connected to long-term care facilities.

The City of Dallas has been tracking hospital bed availability. The latest figures show there are 2,962 beds occupied of the 5,711 hospital beds reported. There are 501 ICU beds occupied, leaving 326 available.

Of the 942 ventilators, there are 298 reported in use, according to data collected Sunday.

Cases in Hunt County now up to at least 32

Two women are the latest reported cases in Hunt County, officials said Sunday. The women are both between the ages of 31 and 49. Their cases bring the county's total to

The facility houses detainees of U.S. Immigration and Customs Enforcement. Across the country, at least 124 ICE detainees have tested positive thus far.

NASCAR has been given the green light by Gov. Greg Abbott to get the races back on the track. Texas Motor Speedway "will work aggressively with the sanctioning bodied and TV networks to give American society, as well as people around the world, a positive distraction during this crisis," TMS President and General Manager Eddie Gossage said in part, in a statement.

Fans will not be at the races, but the races will be televised.

"Our sport is unique because the competitors are inside the race cars with no body-to-body contact like most other sports," Gossage said. "That is a distinct advantage over other sports and why you will likely see auto racing as the first live sport returning to action."

TMS is working on setting a date for the sport's return at the speedway. The June 6 INDYCAR/NASCAR weekend will remain on the schedule unless told otherwise by government officials or governing bodies. The March NASCAR weekend was postponed and has yet to receive a new date.

Bon Jovi's 2020 tour, which was planned to stop in Dallas in June, has been canceled due to the ongoing global pandemic.

"Given these difficult times, we have made the decision to cancel the tour entirely," Bon Jovi said in part, in a statement. "This will enable ticketholders to get refunds to help pay their bills or buy groceries."