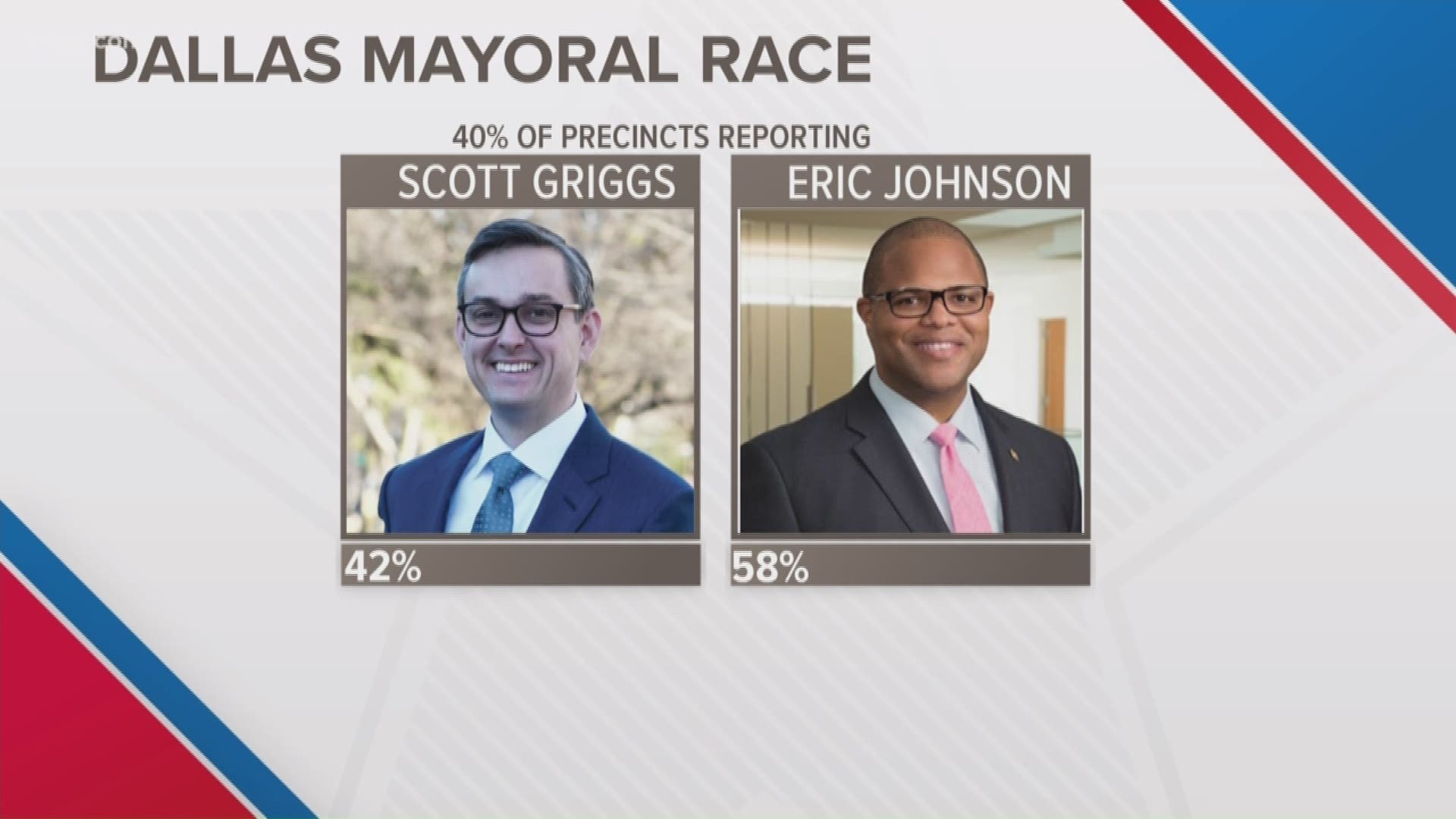 “What Dallas proved tonight," Johnson told supporters, "is that if you work hard and allow the people of the city to help you, the sky is the limit. I’ve always put my faith in two places – in the good Lord and the voters of the city of Dallas. I’ve never been let down by either."

Johnson defeated councilman Scott Griggs with 55% of the vote compared to Griggs' 44%.

"I want to commend Scott Griggs on running a hard race and thank him for his eight years of public service," Johnson said.

Johnson, who campaigned as a consensus builder, was the front-runner all along, having emerged as the top vote-getter in the May 4 election.

He will be inaugurated to his new position on Monday, June 17, at Dallas' Winspear Opera House.

Johnson, 43, had humble beginnings growing up in West Dallas. He got some lucky breaks and a private school education. He was eventually elected to the Texas House of Representatives as a Democrat.

Outgoing Mayor Mike Rawlings — along with a majority of the city council — backed Johnson in the runoff. He was widely seen as the establishment candidate.

Griggs, term-limited off city council, ran on a "Dallas First" campaign and won endorsements from the Dallas Police Association and from firefighters.

On Saturday afternoon, Griggs and his campaign said they felt confident going into the runoff election, but never could make up a double-digit percentage deficit after the early vote totals were released at 7:00 p.m.

City Councilman Philip Kingston, a Griggs ally who was an outspoken critic at Dallas City Hall, lost his seat in District 14.

Griggs and Kingston, self-styled watchdogs, had led a group of vocal critics on council. With their departures from council, it's uncertain who, if anyone, will fill their roles.

Carolyn King Arnold won her old seat back on the Dallas City Council. It's District 4 which is part of Oak Cliff. Arnold, with 2,005 votes representing 52% of the total, defeated Dawn M. Blair, who earned 1,801, 47%. Former Mayor Pro Tem Dwaine Caraway represented District 4 until he went to prison on federal corruption charges.

In District 7, which is Fair Park, South Dallas and Buckner Terrace on the east side of the city, Adam Bazaldua finally earned a spot on city council. Bazaldua, a Dallas educator, has run for office several times before.

On Saturday night Bazaldua got 2,137 votes, 51% of it to defeat attorney and former councilmember Tiffinni Young. She collected 2,045 votes, or 48% of the total.

Kevin Felder is the outgoing councilman for District 7. He made headlines this year after striking a young man on a scooter and allegedly leaving before police arrived. Felder did not make the runoff in May when he ran for his second term.

In District 9, which includes Lakewood, the Casa Linda community and parts of Far East Dallas, Paula Blackmon defeated Erin Moore in a close race. Blackmon got 4,645 votes, or 52%, versus Moore's 4,268 votes, and 47%.

Dallas County has 836,594 registered voters, but only 82,468 voters cast ballots in this runoff election, making turnout just under 10%.