The D-FW economy is “more resilient” than other places, but there are fears a housing crisis looms as job losses remain high. 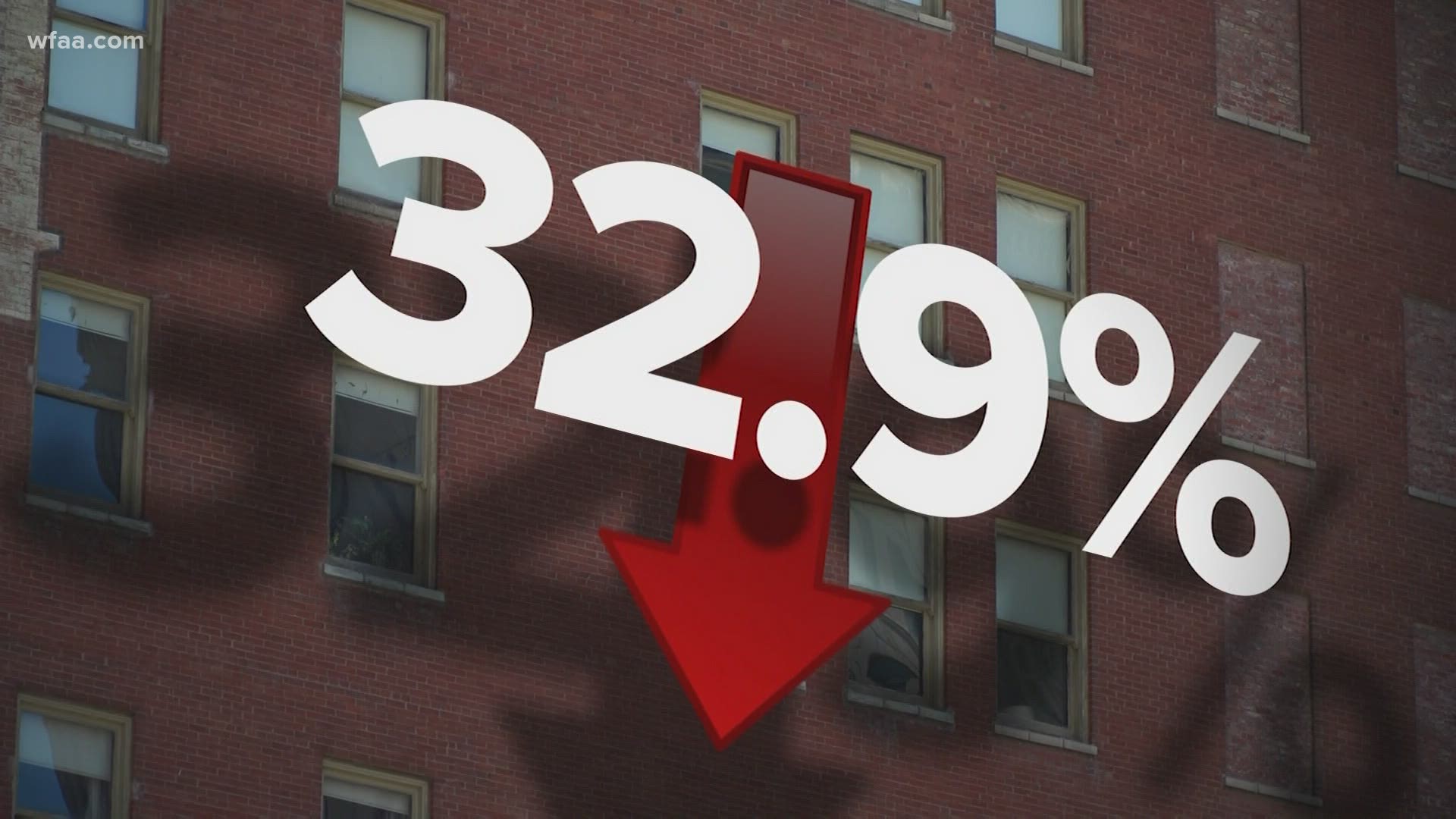 DALLAS — The U.S. economy experienced its largest constriction in modern history Thursday with the Commerce Department reporting a 32.9 percent drop in the nation’s gross domestic product in 2020’s second quarter.

The number is historic but not surprising, according to Texas economist Ray Perryman with The Perryman Group.

“I mean, we’ve never seen anything like this before. We literally shut down the world,” he said. “No one gets to escape this one.”

There are signs of a rebound beginning in Texas. The state unemployment rate dropped to 8.6 percent in June from 13 percent in May.

But in an economic forecast released Wednesday, Perryman said Texas has about 700,000 fewer jobs than it did one year ago, and 900,000 fewer than before the COVID-19 pandemic.

The U.S. economy shrank at a dizzying 33% annual rate in the April-June quarter — by far the worst quarterly plunge ever. https://t.co/frw66ozpVV

According to research from the Dallas Regional Chamber, the D-FW region has lost about 141,600 in the last 12 months.

The local unemployment rate in June was at 8.4 percent, a four-point improvement over May, according to the DRC.

But for many of the unemployed, rent is still due.

“Just in the city of Dallas, out of 1.4 million people we have over 700,000 renters and those are the people that are going to be impacted the hardest,” said Mark Melton, an attorney helping people fight evictions.

RELATED: These Dallas lawyers are standing up to landlords serving eviction notices

“It’s entirely possible you could see eviction rates in the tens of thousands, if not higher,” he said.

In many cities across North Texas, moratoriums on evictions that were put in place as the pandemic began have expired.

Without some sort of rental assistance and extended unemployment benefits passed by the federal government, Melton said, “I think we’re about to see the floodgates open.”

RELATED: More Texans falling into 'income trap,' may not qualify for unemployment benefits

Jobs are the key to getting people back on firm financial ground and Perryman said they will slowly return.

“Back in the 2008 recession, it took the U.S. economy 58 months, almost five years, to get back the jobs that were lost. This time we think that’s going to be somewhere in the 24 to 26-month time frame,” he said. “It’ll come back a lot quicker, but it fell a lot deeper.”

The Dallas Regional Chamber says D-FW has fared better than most large metropolitan areas in the U.S., with only Phoenix reporting fewer job losses since the pandemic began.

“D-FW certainly is more resilient than other places,” said Duane Dankesreiter, the senior vice president of research and innovation at the Dallas Regional Chamber.

“It’s all the things we had going into the pandemic - DFW Airport, our diverse economy - all the things that make us strong will help us come out of this.”

He said he expects a measurable improvement in the third quarter of 2020.