So far, the state's unemployment agency has not required recipients to search for jobs to get benefits. 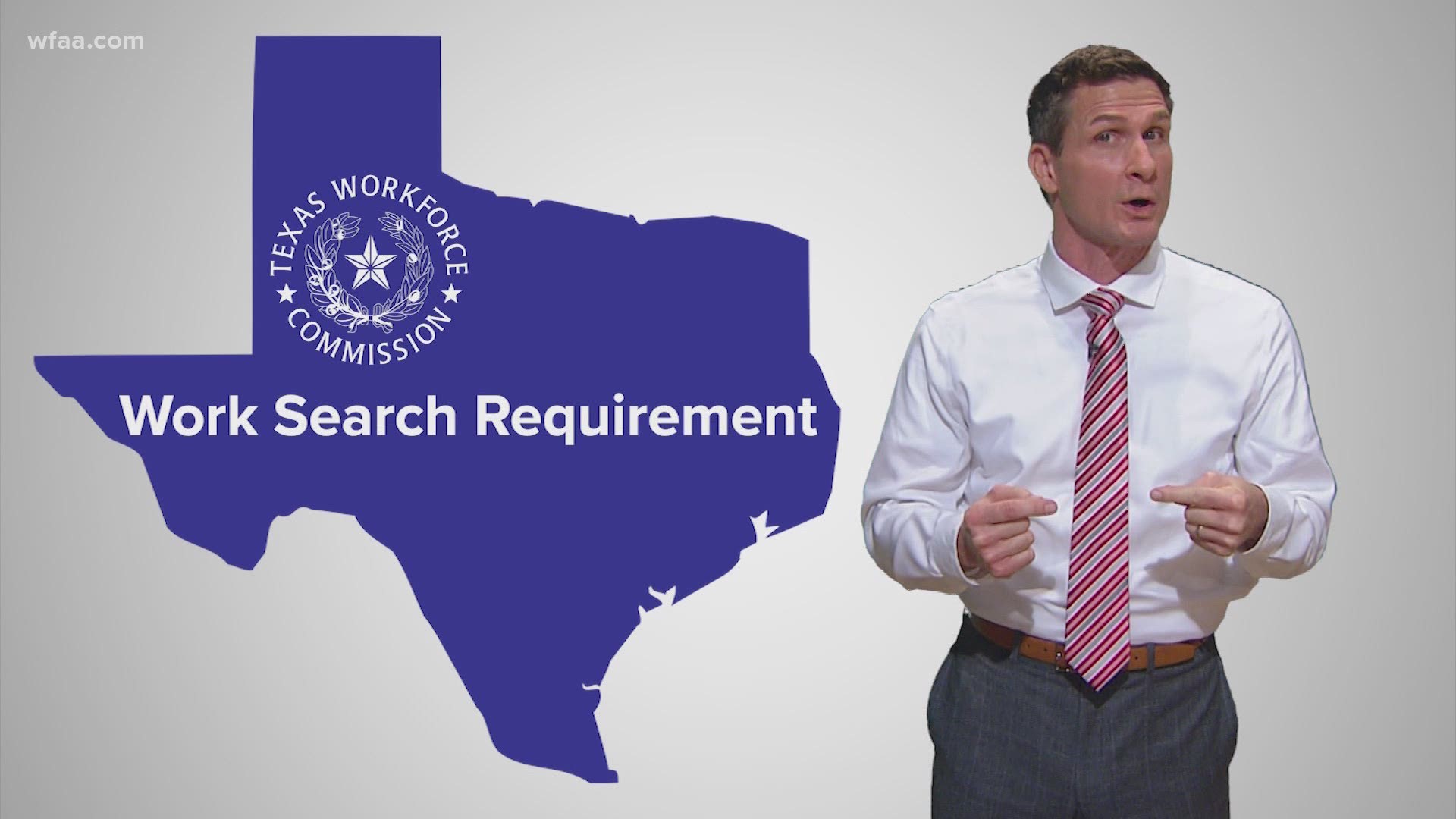 Starting Sept. 21, businesses including retail stores, restaurants, gyms, manufacturers, office buildings, museums, and libraries can expand occupancy to 75% capacity in parts of the state that don’t have a high percentage of COVID-19 hospitalizations.

As of Thursday, only three regions don't qualify.

What does this mean for the work search requirement?

Throughout the pandemic, the requirement that people on unemployment search for a job has been waived.

The TWC walked that reinstatement back soon thereafter as the COVID situation in Texas worsened.

But in recent weeks, when asked about the possibility of resuming the work search rule, TWC has indicated that it would follow the governor’s lead as he reopens the economy.

Thursday, the agency said in the next couple of weeks it “will introduce a strategy” to complement the governor’s reopening plan. The TWC assures it will give notice of at least two weeks before putting the work search requirement in place again.

When job searches are mandated as a condition for getting benefits, anyone on unemployment will have to register at workintexas.com, which currently lists more than 705,000 open positions in Texas.

Anyone receiving unemployment may want to register on the site now to look for jobs, and to get signed up with the website before it becomes a requirement (just in case the website becomes inundated at a later date when the work search requirement is put back in place).

Almost 1 in 12 ‘continued’ claims for unemployment in the U.S. are in Texas

Last week, 49,644 new claims for unemployment were filed in Texas. But that is just part of the story.

The pandemic has taken an enormous toll on many charities. A number of them have been called upon to provide more help than in previous years. Simultaneously, they have had much greater challenges with fundraising because of the need to socially distance and because of the steep economic downturn.

So, North Texas Giving Day is bigger than ever this year. Even in a ‘normal’ year, it was a huge affair for hundreds of North Texas non-profits.

In 2019, over 100 organizations reported that they raised more than 15% of their entire annual budgets in this one day of fundraising. Almost two dozen of the non-profits revealed their collections from the 2019 North Texas Giving Day totaled more than 50% of their annual budgets!

So, give if you are able.

RELATED: Today is North Texas Giving Day! Here's what you need to know