TPWD is breeding big fish with big fish to increase the odds that the offspring will grow big, as well. No other state has a program like it. 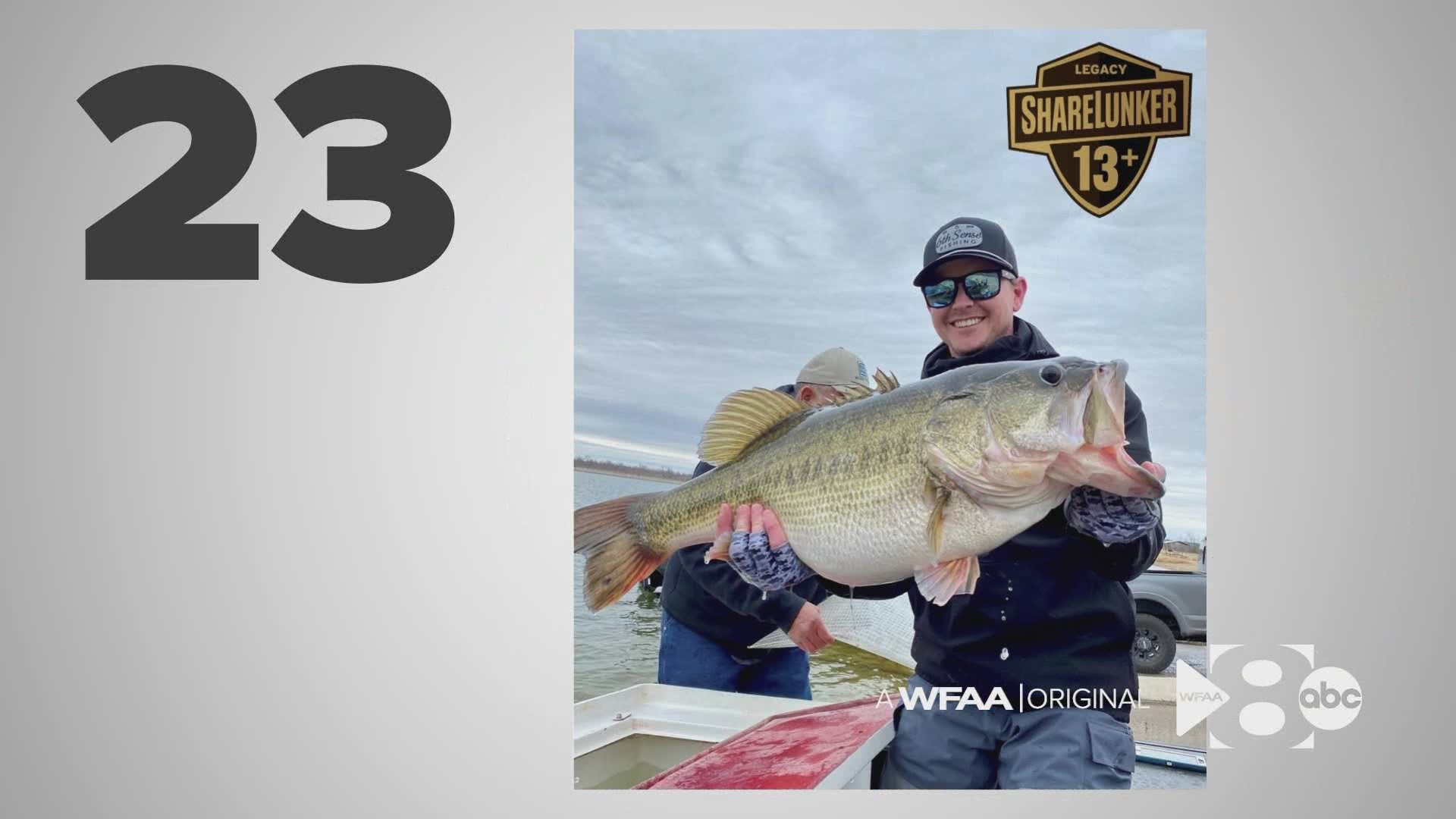 HENDERSON COUNTY, Texas — Just outside of Athens, Texas - in a facility filled with vats of water, pipes, and bubbling tubes - are some genetic giants.

“It’s like thoroughbreds ... those long lineages," explained Tom Lang, the director of the Texas Freshwater Fisheries Center. "These Kentucky Derby winners you see out there - we’re doing that with bass right here in Texas.”

As in Largemouth Bass. One of the most sought-after fish in the state of Texas by anglers.

Texas is known for big ones, and Lang leads the effort to make sure Texas lives up to that reputation.

“It is absolutely hardcore fisheries science in action," Lang said, as he gave WFAA a tour through the fisheries center.

What is the ShareLunker Program?

Since 1986, Texas Parks & Wildlife Department (TPWD) has been committed to conservation and maintaining a population of big bass for the 2 million anglers across the state.

They do that through the ShareLunker Program.

No other state has a program like it, and it all comes down to selective breeding and DNA.

Every January, February, and March, female bass are big and filled with eggs.

Anyone who catches a bass over 13 pounds during those months is encouraged to call TPWD to report their catch and donate the fish to TPWD.

Biologists from TPWD will travel to where the fish was caught, collect the fish, give it first-class medical care, and take it back to Athens for breeding in a controlled environment.

Anglers are not obligated to turn in their catch of a lifetime, but their donation helps facilitate bigger bass in the future.

Once the fish gets back to Athens, Lang explained that it will get paired with male offspring of previous ShareLunkers, "and so, you get a ShareLunker spawning with a ShareLunker. And when you put those two things together, you end up with some really nice big offspring," he added.

In other words, TPWD is breeding big fish with big fish to increase the odds that the offspring will grow big, as well.

Also, these big bass can lay anywhere from 20,000 to 100,000 eggs! Since they do that in a controlled environment, much more off those eggs survive and hatch than they would in the wild.

Once the ShareLunker eggs hatch and grow a little, they are transferred to outdoor ponds at the fisheries center, where they continue to grow until they are big enough to be put into the lake their mom was caught from - or into other lakes across Texas. The hope: that they will grow into ShareLunkers themselves.

And if history is any indication, some will!

Because TPWD biologists do DNA testing and tracing on these fish, they can figure out if any ShareLunkers that are turned in are related to each other or past ShareLunkers.

This is the most fascinating example:

In 1988, a fish was caught from Gibbons Creek Reservoir that weighed over 16 pounds. It was turned over TPWD, and was recorded as the ninth ShareLunker in the early days of the program.

It’s like the Manning family, but with fins instead of football!

If you need more proof the program works, just look at this past year. Twenty-three Lunkers were turned into the program. That's the most since 1995. One caught out of O.H. Ivie Lake weighed over 16 pounds, and was the sixteenth-biggest bass ever caught in the state of Texas.

“We’re doing everything we can here at Texas Parks and Wildlife to make the best fishing possible for current and future generations," Lang said.

It's a cycle: Anglers catch a fish, donate the fish, TWPD breeds the fish, puts its offspring back in the lake, they grow, angler catches fish - and so on.

Without this partnership, there's pretty strong evidence that the big bass population in Texas would not be what it is today - or hopefully what it will be in the future.

These bass need a place to grow into giants. Just putting offspring into a lake and hoping for the best is not an optimal strategy. So, there is a new lake being constructed to do just that, a nursery of sorts for giant bass.

It's a place we've been to before.

“Bois d'Arc Lake is the first major reservoir built in the state of Texas in 30 years.”

That’s what Jeff McKito, the public relations specialist for the North Texas Municipal Water District, told us over a year ago when WFAA first visited Bois d'Arc Lake.

A quick refresher: Bois d'Arc Lake is a brand new reservoir being built outside of Bonham, in Fannin County, by the North Texas Municipal Water District (NTMWD). It will serve as a water supply for northern suburbs of Dallas-Fort Worth, and the lake will be roughly the size of the city of Allen when it is full.

Click on the video below to watch the animation to see how that will happen.

Back when we first visited, the lake was still very much under construction and the lake was not filling, yet.

But this time, McKito told us, “We’ve reached a major milestone in the project, and we're now capturing water."

"Now, it’s up to Mother Nature for how long it will take the lake to fill," he said.

So, the lake is starting to fill, but the body of water is also planned to be more than just a drink to quench the thirst of the D-FW area.

NTMWD has partnered with TPWD to create a lake that will hopefully be a big bass factory in the future.

We caught up with Texas Parks and Wildlife at Bois d'Arc Lake. They are already stocking ShareLunker offspring into the creeks and ponds that will become the lake, once it is full. This will give the lake a head start in growing these giant bass.

In the future, the lake will also be stocked with other popular fish like crappie, white bass, and panfish. Not only will these give anglers more opportunities to catch various fish, but they also serve as forage for bigger fish.

But, there's also more that's needed in order for these fish to thrive and grow.

NTMWD has left areas of pipes, concrete, and piles of brush scattered about the area. Once the lake fills, these will turn into "reefs," or structure under 10 to 20 feet of water, that will provide habitat for fish, help them stay healthy, and grow to their full potential.

NTMWD has also left standing timber in parts of the lake and natural vegetation that will give fish plenty of cover, as well, once the lake fills.

So when will the lake fill and be open to recreation?

As McKito said, that's up to Mother Nature to provide the water, though that's beginning to happen. But also NTMWD needs to finish up construction and deem the lake safe for activities, although all the recent rain has put a damper on that process. NTMWD does not anticipate the 16,641-acre lake opening to the public this year, even if Mother Nature provides enough rain to fill the lake. Until a public opening date is announced, the lake is off-limits.

It may take a handful of years for these ShareLunker offspring to really grow into big bass, but the hope is that some of them will turn into ShareLunkers themselves, some day. Then Bois d'Arc Lake can be added to the list of numerous lakes across Texas that have produced giant bass.

And maybe one day these daughters, granddaughters, or great-granddaughters of past ShareLunkers from Bois d'Arc Lake will make their way back to Athens, repeating the cycle.

“Texas is the big bass capital of the world, and we’re going to keep it that way," Tom Lang promised.

Further proving: everything is bigger in Texas.