A man in Fort Worth found the Purple Hearts decades ago. This past weekend, the rightful owner was found and the medals were returned, in person. 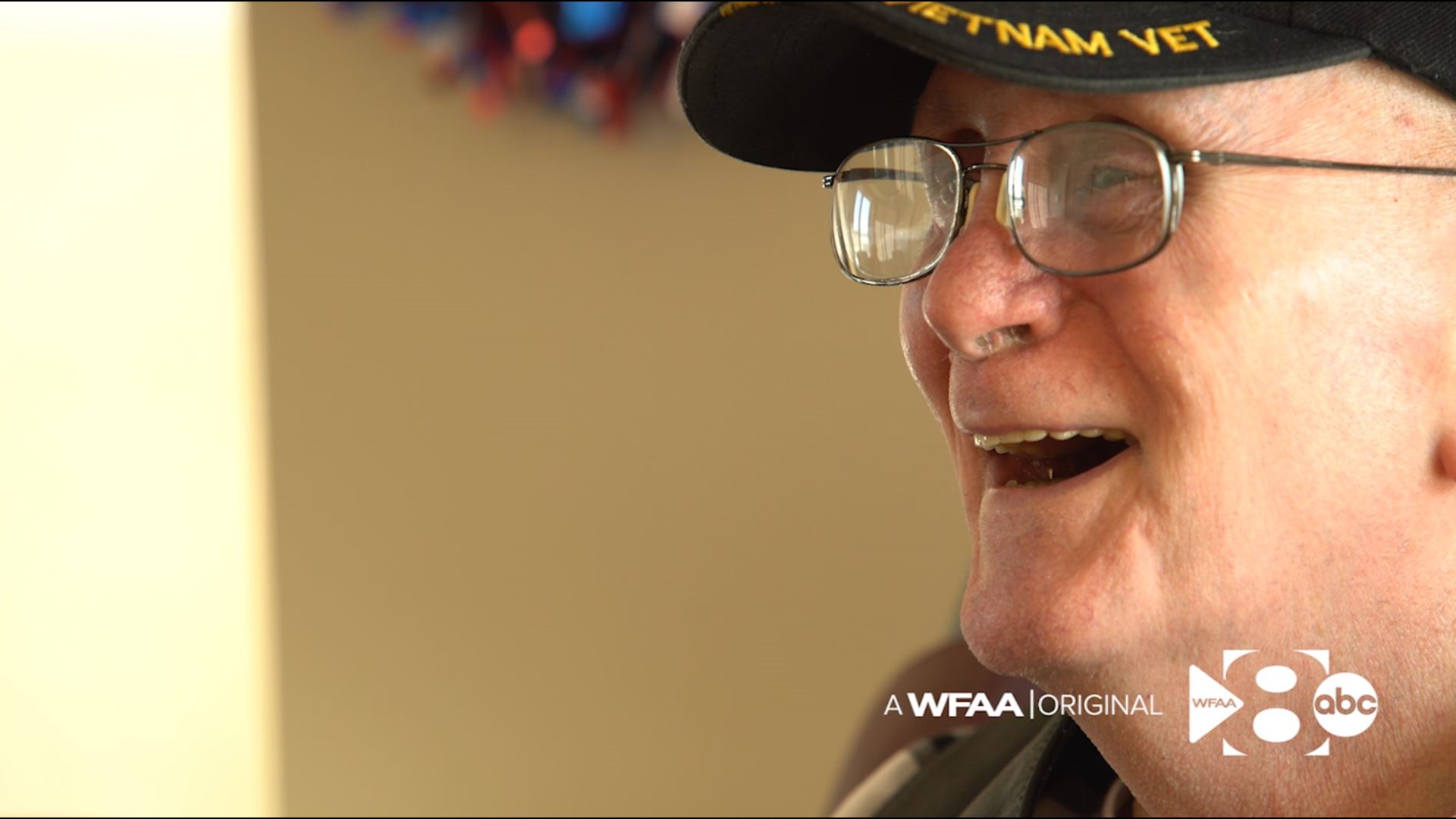 DULUTH, Minnesota — Willie Dimes has a good heart. That much is now obvious. Because he sent us on a journey that covered 1,000 miles and 40 years to return a pair of priceless medals to their rightful owner.

A few weeks ago, he called WFAA for help.

Dimes is a collector, a self-admitted packrat who frequents auctions and estate sales hunting for treasures. But decades ago, in a box he purchased at an estate sale, he found something he knew he couldn't keep.

He found two Purple Hearts, still in their original case. They said "Award of Merit" on the back. But there was no engraving, no notation, no indication to who they might belong to.

"He may still be alive, I don't know," Dimes said, an Army veteran himself, when he asked for help finding out who they belonged to.

"I've only gotten dead ends," he said. "Finding him to me, I feel like that's the best thing to do. I was in the service too, so I know it means a lot to a person, you know."

The only clue to who that person might be was a letter inside the case written by someone named Mary Rutsis in Duluth, Minn. and postmarked in December 1979. But the letter, all four handwritten pages of it, said nothing about the Purple Hearts.

Rutsis wrote the letter, asking for help in paying bills she acquired taking care of someone named "Chris."

After WFAA's first story about the Purple Hearts, something really strange happened.

"For some reason, just thought maybe I could do something," Martin Branville said from his home in Weatherford, Texas after seeing the WFAA story. "And so, I made a phone call."

He had friends who used to live in Duluth. He wondered if they might know someone named Mary Rutsis.

"That's when I called you and said mystery solved," Branville said.

And thanks to his work, the next day WFAA's Kevin Reece was talking to "the" Mary Rutsis on the phone.

"Well, I'm glad we found you. We'll see if we can solve this mystery together," Reece told her.

"Alright. Thank you, thank you," she said.

She said the Purple Hearts belonged to her ex-husband, a Vietnam War veteran named Christian Rutsis. But after a rocky eight-year marriage, they divorced more than 40 years ago.

So, to solve the rest, there was only one thing to do. A weekend trip to Minneapolis, and a nearly three-hour road trip to a little town in western Wisconsin called Camp Douglas. That's where, in a small tan house surrounded by three feet of snow, Mary Rutsis held her handwritten letter again.

"That's my handwriting for sure," she said when Reece handed her the letter. "Oh, four pages," she said with a look of surprise. "Holy smokes!"

She was Chris Rutsis' second wife. She'd written that letter in 1979 to his third wife in Dallas, asking for help paying the bills he'd incurred. She never got any money, she told Reece.

But after learning about the Purple Hearts and her handwritten letter, she'd also made a few phone calls of her own and was close to helping write the rest of this story.

She called a woman named Joanne Olson, her former sister-in-law.

Chris Rutsis was still alive, five hours north of Camp Douglas in Duluth, Minn. And that's where the Purple Hearts needed to be.

At Chris Jensen Health and Rehabilitation Center, a nursing home high above Lake Superior in Duluth, in a second-floor sunroom decorated in red, white and blue just for the occasion, Olson handed her brother his long-lost Purple Hearts.

"There's your Purple Hearts, Chris," she said to her now wheelchair-bound brother. "You remember these?"

"Ten years ago this would have meant so much to him," she said with tears rolling down her face.

'It's a completion of his life'

Rutsis is 73 years old. Parkinson's and dementia have a firm grip on him now. After Vietnam, he suffered a lifetime of problems linked to PTSD from the war, revealing the disturbing details of what he saw and what he had to do only to his little sister.

"When his son was born, he couldn't hold the baby. Because of things he had to do over there," Olson said.

She wasn't more specific about the incidents her brother had witnessed in Vietnam that included the deaths of young children.

Rutsis received the Purple Hearts after being shot and then later, when he was returned to the front lines, riddled with shrapnel from a grenade that killed a fellow soldier.

"Why do you still come visit your brother?" Reece asked her. "I know it can be difficult at times."

"Because I love him. We're brother and sister. And I'll just be there till the end," she said.

But even with an end drawing near, with the Purple Hearts back in hand, this is a family that can still find joy.

Rutsis, difficult to understand when he speaks, will still blurt out a colorful four-letter word or two and make his family burst into laughter in the process.

"Are there still good moments like this?" Reece asked his sister.

Rutsis was the one who answered first.

"Oh yeah," he said as his family broke into laughter again.

And a good moment like this was worthy of a celebration. The staff at Chris Jensen Health and Rehabilitation decorated a large second-floor meeting area and presented Rutsis with a cake, adorned with a very large icing Purple Heart.

"Does it really mean something to you, to get them back?" Reece asked Olson about the Purple Hearts.

"Absolutely," she said of the medals that vanished when his third ex-wife passed away in Texas.

"It's a completion of his life."

A life now with two of its most important pieces returned, thanks to Dimes back in Fort Worth.

"A special guy, only thing I can say," Dimes said, "with two Purple Hearts."

"We are thankful to the gentleman who found them," said Chris Rutsis' niece Stephanie Annala-Hakes. "Very thankful that he reached out and wanted to return them to their rightful owner."

"That was really good," Mary Rutsis said from her home in Wisconsin. "It's just the best thing ever. That's a good person," she said of Dimes.

"To care enough to get them back," Olson said, "how wonderful of him. What a good heart!"