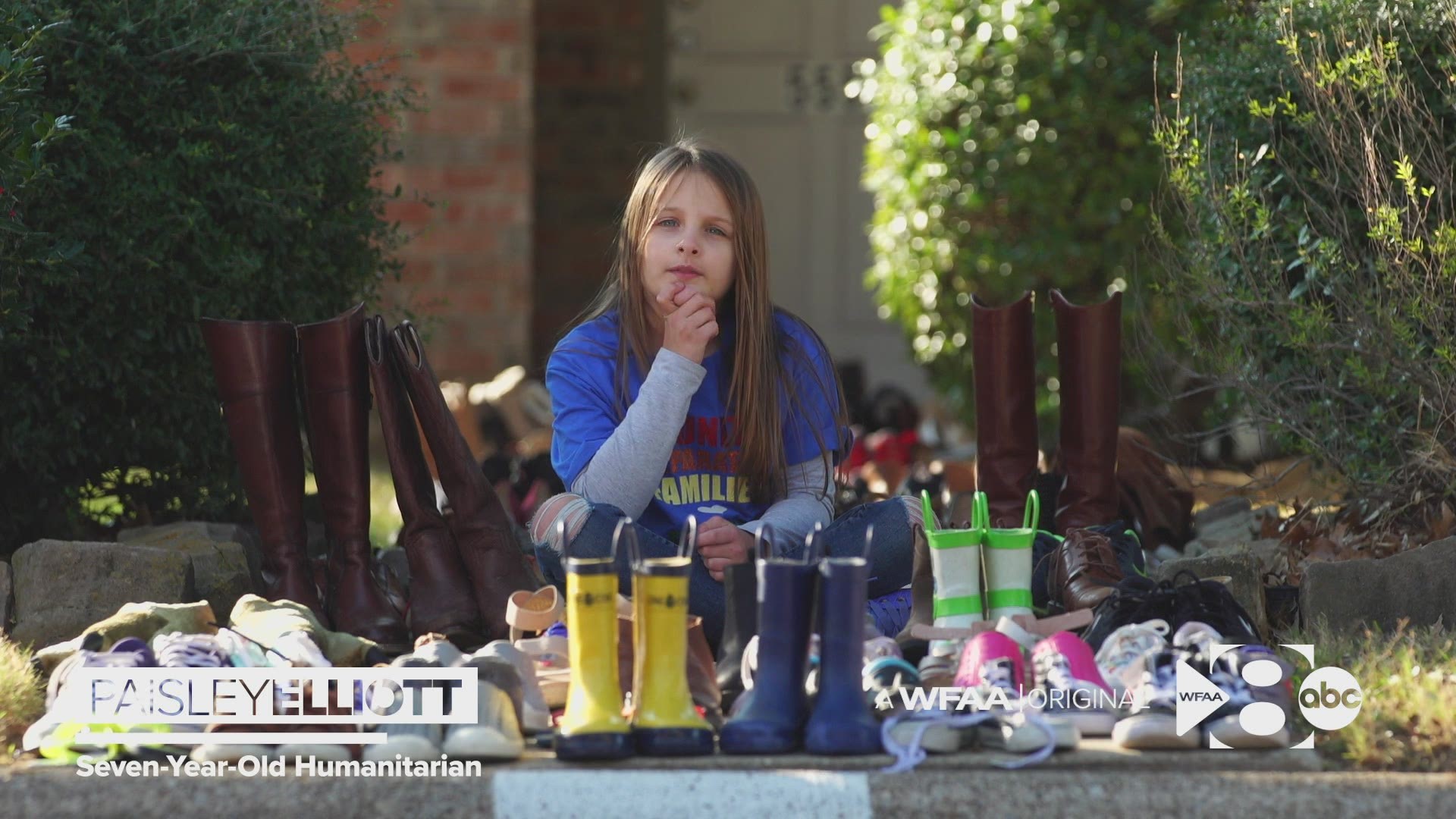 GRAPEVINE, Texas — As she unrolls a large tent in her front yard, 7-year-old Paisley Elliott insists she’s not camping out. Rather, by putting her tent up she’s putting her foot down.

Every Tuesday since October, she has slept in her front yard in Grapevine and will continue doing so until her demands are met.

To understand what led her to pitch a protest in the front yard, we need to go back a couple of years.

When we first met Elliott back in 2019 she had just read a story from the Bible about refugees.

“She came in crying with an arm full of stuffed animals and said, ‘I want to give these to the refugee kids,’” said Tali Jones, Elliott’s mom.

After she did that, she collected toiletries and other basic supplies and then hand-delivered them to refugees in Mexico.

She soon graduated, not only from preschool but on to far bigger projects. She eventually raised $50,000 to build a school for refugee children at the Moria refugee camp in Greece, one of the worst refugee camps in the world.

For her efforts, she was the youngest person in the world to be nominated for the Nansen Award, given annually to one person who champions the cause of refugees.

RELATED: She's on a mission to change the world, one donation at a time

She was just 6 years old but promised to do even more.

Since then, she’s been invited to speak at the Global Refugee Forum in Geneva, met with leaders at the United Nations and visited kids at the Moria Refugee Camp.

Elliott says there are still many refugee children who need help, which is why she’s now pitching a tent in the front yard.

“Because I just wanna help more people,” she said.

Elliott says there are still 628 kids at the United States’ southern border who are still separated from their parents.

“I thought about that and I thought, ‘hmm, if the adults aren’t going to do it, maybe us kids can do it,’” she said.

So, she plans to sleep outside, even if it’s nearly freezing-which it was the day we met her-until every kid is reunited.

“She has been standing her ground,” her mom said. “I guess at this point we should expect this to continue until all kids are reunited.”

She recently partnered with a non-profit called Miles4Migrants, an organization that raises money for airline fares that go directly to reuniting separated families.

Elliott has even sent letters to the governor and the president, hoping someone will do something.

“I’m trying to but no one’s helping me,” she said.

Unfortunately, since starting her protest, not one single separated child has been reunited with family.

Truthfully, there’s really only so much a 7-year-old can do. She can’t just give a refugee child a home. At least, not without asking first.

After begging her mom to open a spare room for a refugee child, Jones and her husband were licensed to become foster parents. Last fall, they welcomed a 16-year-old Guatemalan refugee into their home.

“It was my idea that we can open up our hearts and make more refugees into our family so then our hearts will go bigger, bigger and bigger.”

She is, by all accounts, part of this family and while she gained a home, Elliott says she’s gotten much more.

So says the girl who’s always got room in her heart.

For more information or to contribute to Elliott’s Miles4Migrants campaign, visit www.miles4migrants.org/Paisley.