Four months after a near-death lightning strike, a Keller teen is thankful for the family, friends and doctors fueling his physical and emotional recovery. 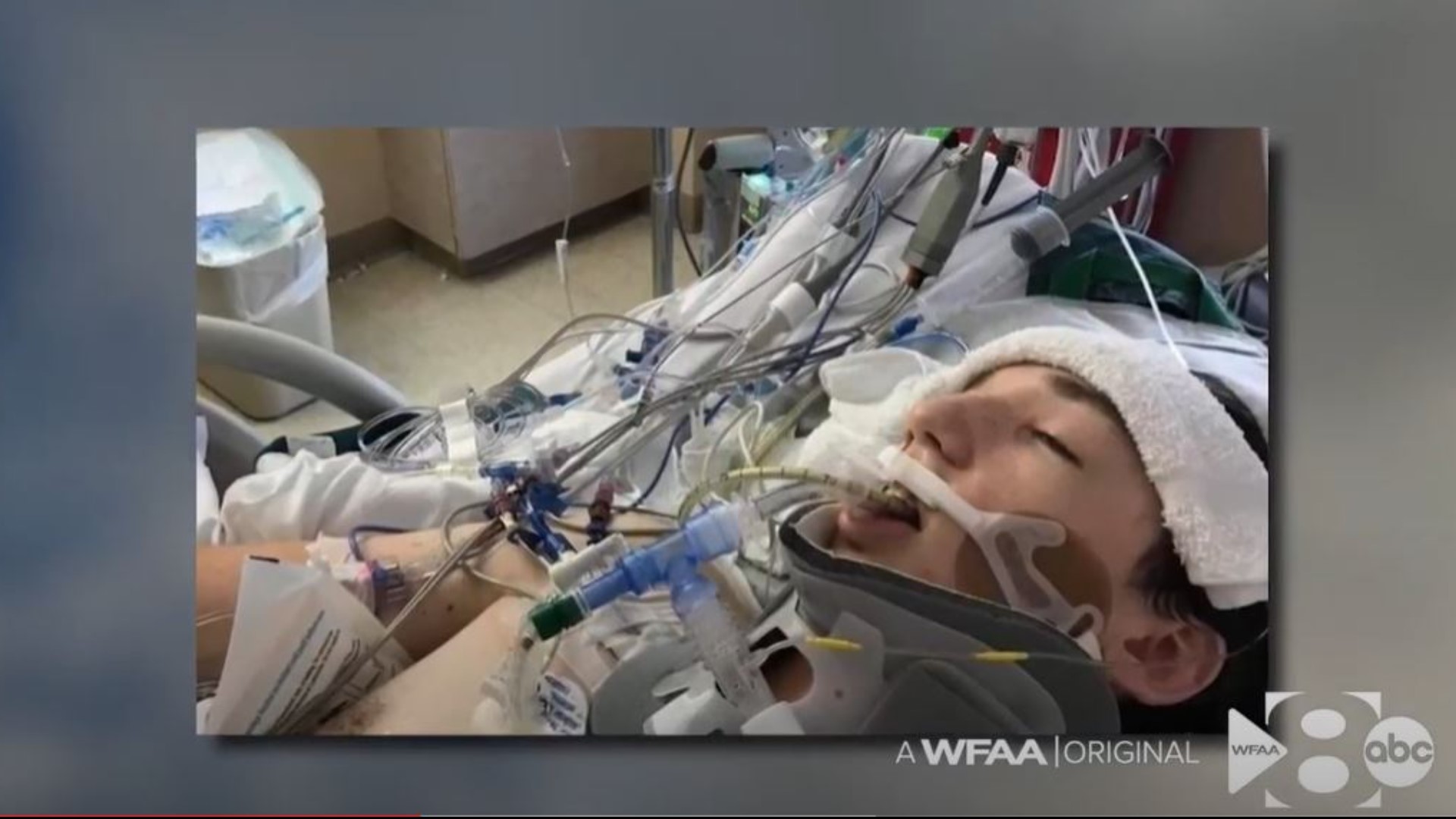 KELLER, Texas — Statistically, a person has a one in a million chance each year of getting hit by lighting. But those remote odds still add up to a fatal encounter for about 30 Americans a year.

A 15-year-old in Keller can still marvel at the odds that were not in his favor while also being thankful for the odds he's been able to beat.

It happened in July. The Brewer family — Barbara and Jeremiah and their children Ashley and Jacob — escaped the confines of the COVID-19 lockdown affecting us all to take a family vacation in Sarasota, Fla. But on their second day on the beach, a summer thunderstorm began to build. They were running from the beach to their car when the lightning hit.

"My mom was screaming 'Jacob!'" his sister Ashely recalled. Jacob had taken a direct hit. The lighting entered his chest and exited his right foot. His family turned around to see him sprawled on the sand, his body lifeless.

"And I was like, 'Oh my gosh, that hit him.' It was crazy," Ashley said. "Very, very scary. I really did think that he was going to die on the beach, and I was terrified."

"I thought I lost him on the beach," his mom Barbara said. "He was gone."

But three months after those frightening 45 minutes with no pulse, while good Samaritans, a sheriff's deputy and paramedics resuscitated him four different times, I found Jacob and his mom in mid-October in Chicago, Ill.

"This Friday's going to be 100 days that Jacob's been in the hospital," Barbara Brewer said.

After surviving the lightning strike, after enduring multiple surgeries to open his shins and forearms to save him from compartment syndrome (the literal shock to his neurological system caused pressure to build in his legs, arms, and back), Jacob was now being treated at the Shirley Ryan AbilityLab in downtown Chicago where he was receiving physical and occupational therapy. While the lightning strike and 45-minute stoppage of his heart did not leave him with any cognitive damage, he is still paralyzed from the waist down.

"Can't really do anything. So it's really hard," he said when we met in Chicago. There's definitely some highs and lows and I have some bad days and good days."

"He has been through so much," his mom said.

"There is definitely a chance of recovery," Jacob said. "But it will just take a very long time."

But that day we met in mid-October in Chicago was also the day he got some very good news.

"I guess we're going back home to Texas after I get out of here," Jacob said.

What he didn't know was that back home in Keller, a welcoming committee was getting ready for his arrival.

"I hope it lifts his spirits," said Cortney Hoppe, a neighbor and friend who was among an army of volunteers who removed all the furniture from the Brewer home, repainted every interior wall, and removed the carpet to install laminate flooring to make it more wheelchair-friendly.

On October 30th, friends, neighbors and classmates from Timber Creek High School lined his street with signs and banners and balloons. Students from Keller ISD built and installed a wheelchair ramp at his front door.

"I hope they get a sense of hope, that Jacob's going to be just fine," said Kristen Rohrbough with the Keller Center for Advanced Learning.

"Jacob is an inspiration for all of us. He's here for a reason," said Tammy Melendez who helped organize the home improvement effort at the Brewer home. "His mom is always there for us when we need her. And it was time we step up and do something for this family."

"I'd hope that he would know that he's not alone. That he's got a lot of people pulling for him," added Hoppe.

And by the time he arrived with his own police escort late that night, people pulling for him is exactly what he found.

One more thing to mention: Jacob's arrival at home was delayed several hours because of yet one more family mishap. His plane from Chicago blew out two tires when it landed at DFW Airport.

But after being greeted on their return home, the Brewer family wanted to have a chance to say thank you.

"It's just incredible," Barbara said. "We're so thankful for all the people that have come into our lives. Our story could have been totally different. And that's what we're thankful for. We're thankful that we're all together."

After multiple surgeries, Jacob still attends physical therapy sessions each week. The goal is to regain as much movement in his legs as possible.

"And we're going to keep staying positive and working hard toward that and praying that's what happens," his dad Jeremiah Brewer said.

"I'm just thankful to be here," Jacob said. "And still have the chance to live the rest of my life. It could be way worse."

A chance encounter with a bolt of lightning very nearly ripped this family apart. But, in a house decorated for Thanksgiving, a little sister said it did the exact opposite.

"I'm especially thankful to have my best friend back," Ashley Brewer said. "Me and Jacob, I mean he really is my best friend. And I'm just really glad that he's alive. We're best friends. I don't know what I would do without him."

"This has been an incredible journey," Barbara Brewer added.

A journey that, thanks to doctors, friends, Good Samaritans, and a lot of prayer, they get to continue taking together.

The Brewer family's GoFundMe site for his continuing treatments can be found here.