Shot in an attempted robbery last year, Dr. Rose discusses how his life has changed since the incident, and how he plans to continue bringing smiles to North Texans. 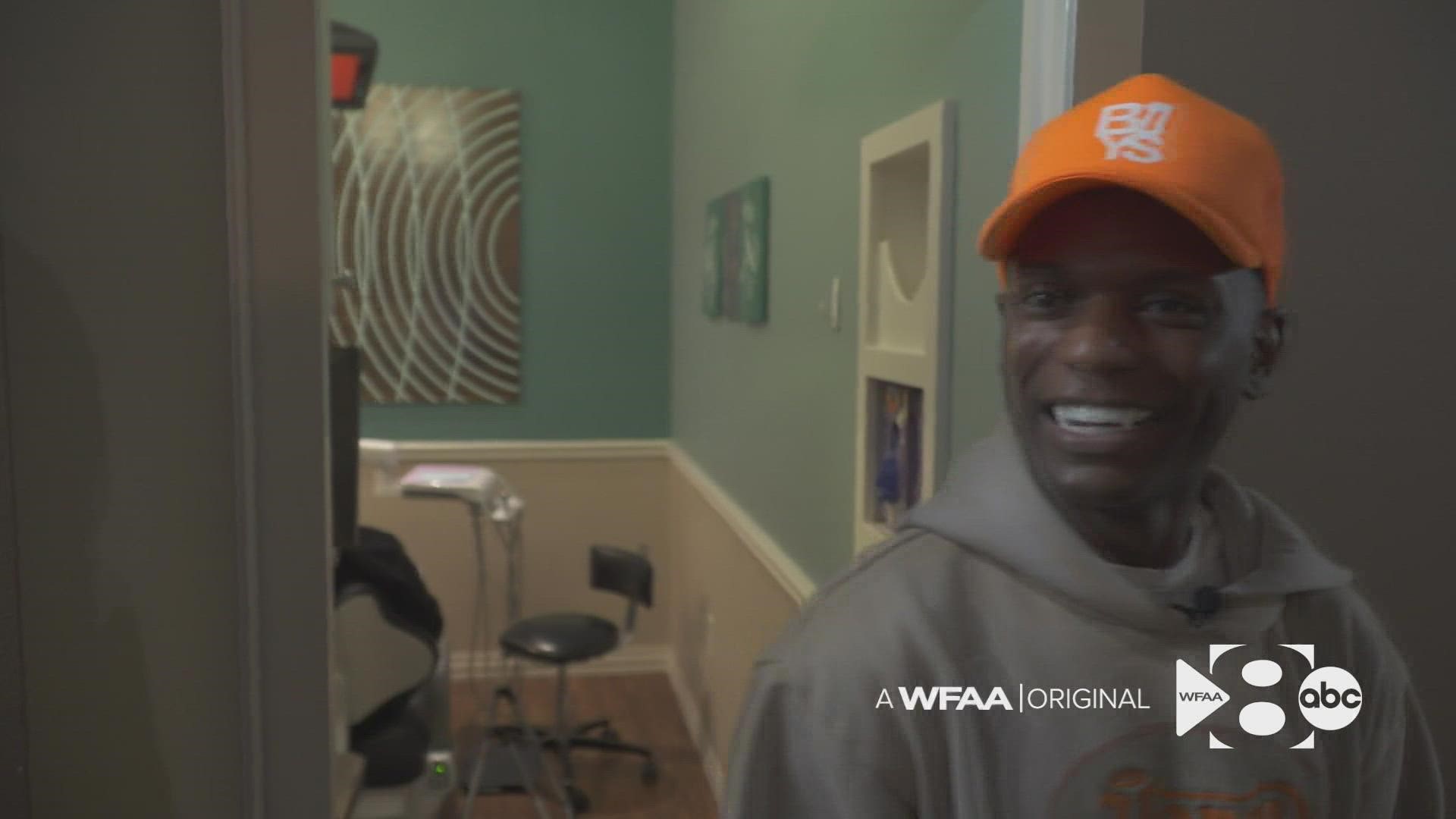 DALLAS — Watch the full story tonight on WFAA News at 10.

Walk into Jarrett Rosenborough's dental office, and service comes with a smile - even a laugh.

And if you're one of his 300,000 followers on Instagram who know him as "Dr. Rose" on social media, you know it's all the same.

"This is my platform to entertain," Rose said, referring to his work at his dental office. "Dentistry has never been a thing in my community. You only go to the dentist when you’re in pain.”

His mission? Change the narrative about what it means to sit in his chair.

"I want to add a uniqueness to my field, 'like, hey, come to the dentist. It’s okay to just be here,'" Rose added.

It is that comfortability and relatability that makes Dr. Rose different.

"I grew up in Oak Cliff on a street called Hendricks," he said. "It was known for what every poverty-filled neighborhood was pretty much known for. The same thing: drugs and obesity.”

Growing up, he loved to learn.

"I was going to dental school and still coming back to this environment," Rose said.

It was his mom who reinforced the importance of staying focused.

"I always say: jails, institutions and death. That’s the three things that's gonna happen if you go to those streets you know," said his mom, Rita Bell.

And he was focused, both through college and dental school - to eventually opening his own practice.

It's no surprise that that drive translated into another passion: the dentist who works on your teeth can also work the pen. Dr. Rose is an up-and-coming hip-hop artist.

"Music helped me stay in tune with that spiritual side,” he said.

His lyrics are a way to share his personal journey. A journey that took an unexpected turn last year.

It was Nov. 12, 2020, Dr. Rose was leaving his office, when he was shot during an attempted robbery.

"I was hysterical," Bell said. "Until you have a child, you don’t know how it feels to get that type of call.”

His car was riddled with bullets, his face left bloodied with a bullet lodged in his back.

"I feel like when you go through something that traumatic, you have blackouts,” Rose said.

He doesn’t remember all the details, but when he returned to the place where he was shot nearly one year later, for the very first time with our team, what he does remember came flooding back.

"It was a triggering moment for me to actually stop here and walk on this property," he added.

For nearly two months after the shooting, the man who was once a source of joy for so many went silent on social media.

"I was finding myself," he said. "You go through these questions like, 'what's going on?'"

So, instead of focusing on the negative, he changed the narrative.

"I’ve always done a lot of good things, but I've always been scared to show it," he added.

Now he's focused on change, like the volunteer work he does at local schools through his non-profit "I-Lift."

"I feel like people understood the message at first, and it got lost in what I was doing because it looked like I was so consumed with what the world wanted," he said. "I feel like my gift is, I get to make people who has been through a lot of trauma - physically and emotionally - smile."

Because, he knows a smile means so much more on the inside. A message he shares in the chair, on social media and, now, on the mic.

For Dr. Rose, there is no escaping the fact that he was a product of his environment. In fact, it helped him become a more finished product.

If anything, it inspired him to bring smiles to a place that he felt had so little to smile about.

Dr. rose would dodge all those realities and make one reality that makes a difference.

Sure, he loves to entertain and he can do that in many spaces, but more importantly he can inspire - and that's something worth smiling about.

You can follow Dr. Rose here and learn more about his nonprofit I-Lift here.