'3 steps forward, 5 steps back': 2 North Texas families share how they're navigating the start of school in a pandemic – again.

"You hope for the good and prepare for the worst," said Michael Williams, who has three children attending in-person classes this year. 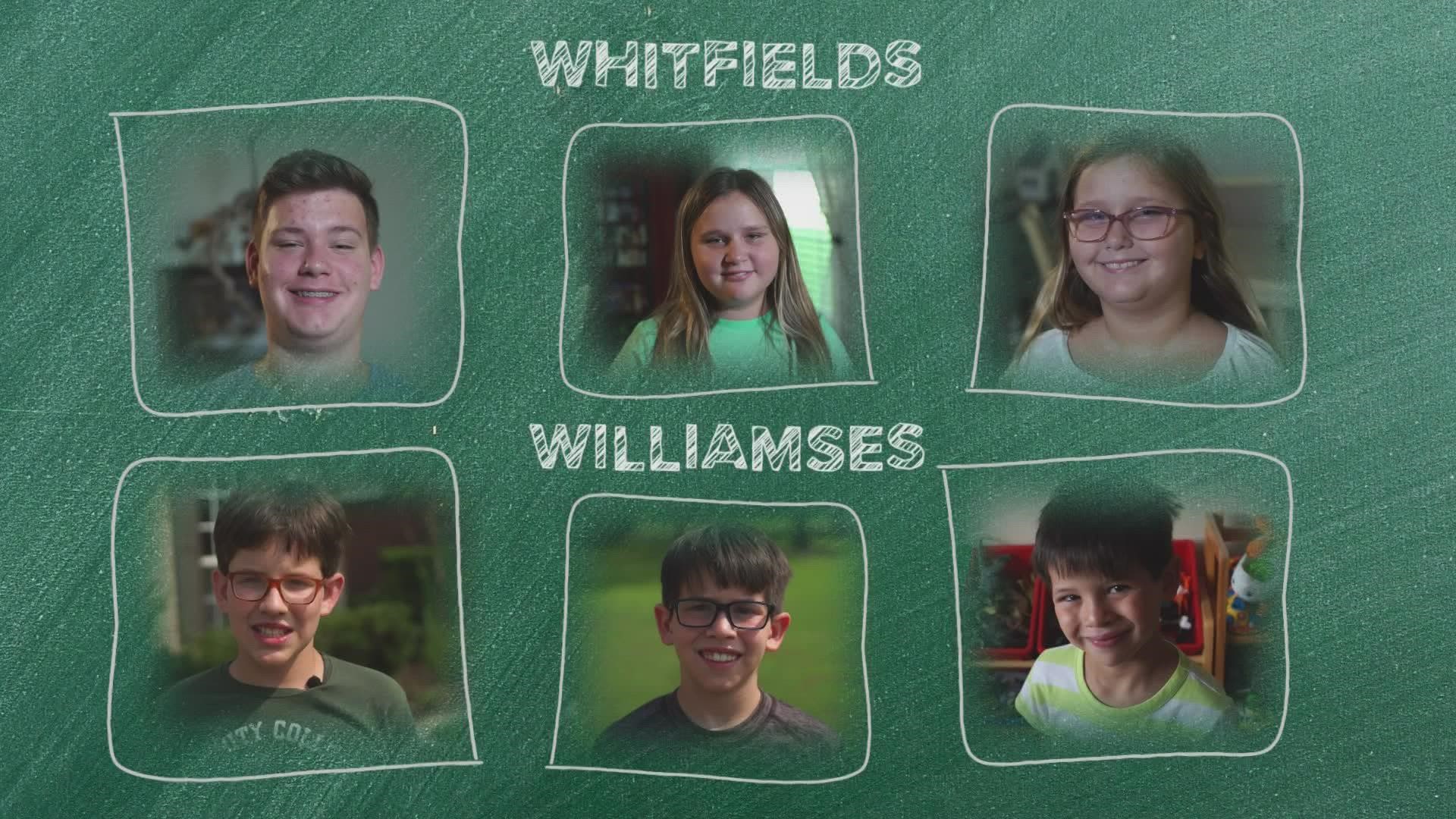 DALLAS — Last year, WFAA introduced you to the Williams and the Whitfield families. WFAA chronicled their lives as they navigated the uncharted waters of schooling during a pandemic.

This year, WFAA decided to catch up with them again. Both families of six now have three children who are in grade school this year.

Both families are coming off relatively normal summer breaks. Both did some traveling and summer camps, and said this summer felt the closest to "normal" they've ever had.

"I feel like it's been good to reset and realize what's important," said Lee Whitfield.

The Whitfields start school in the second week of August and will be returning to the campus for the first time in almost 18 months.

Their second oldest, Spencer, has been vaccinated and will enter the 9th grade at Wylie High School. He said it's likely his friends won't recognize him. He grew from 5'2 to 6' over those 18 months.

"They'll be like, 'Is that really you? You look way different.' I'll be like, 'things have changed,'" said Spencer.

The Whitfields have purchased dozens of little bottles of hand sanitizer and anti-bacterial spray, masks and wipes. Their three children have stuffed their backpacks with the items and intend on cleaning their desks at the beginning and end of each class.

"It kinda [sic] feels like they're being thrown to the wolves," said Alisha Whitfield, about the current state of COVID cases in D-FW.

Wylie ISD has made mask-wearing optional and is not currently offering a virtual school option. The Whitfield kids will be wearing masks, because two members of their family have compromised immune systems.

"It feels like we're going three steps forward and five steps back," said Teresa Williams, talking about the current rise in infections.

The Williams children did start off virtual learning last year, and then transitioned to in-person learning at the end of the year. The children will return to school campuses again this year.

Michael and Teresa Williams have required their children to wear masks as well.

Liam Williams is their oldest at 12 years old. He is entering 7th grade at Northwest ISD, and he was just old enough to get the vaccine.

"Until the delta variant came around, I got to breathe again," said Liam, referring to have to wear a mask.

The Williams children are not all that excited about having to wear masks.

"When we told our 12-year-old, who is fully vaccinated, he flipped out. He saw [the vaccine] as his get out of jail free card," said Teresa.

RELATED: A Tarrant County house left divided on getting vaccinated

Michael and Teresa Williams were both teachers. This year, Teresa took a job at her children's school district and Michael left teaching to take a job at their church.

The Williams start in the third week of the month.

"I don't know if they'll be bullied, but I think they may give into peer pressure. When you're only one or two in a group of 100 you feel different," said Teresa.

"In a world full of learning distractions, the pandemic is the biggest one. And our children have to learn in this environment."

The Whitfields have a backup option for homeschooling if positive cases get out of control. The Williams said they'll take it one day at a time.

"You hope for the good and prepare for the worst," said Michael Williams.

And we keep saying the worst is behind us, one day that will be true.