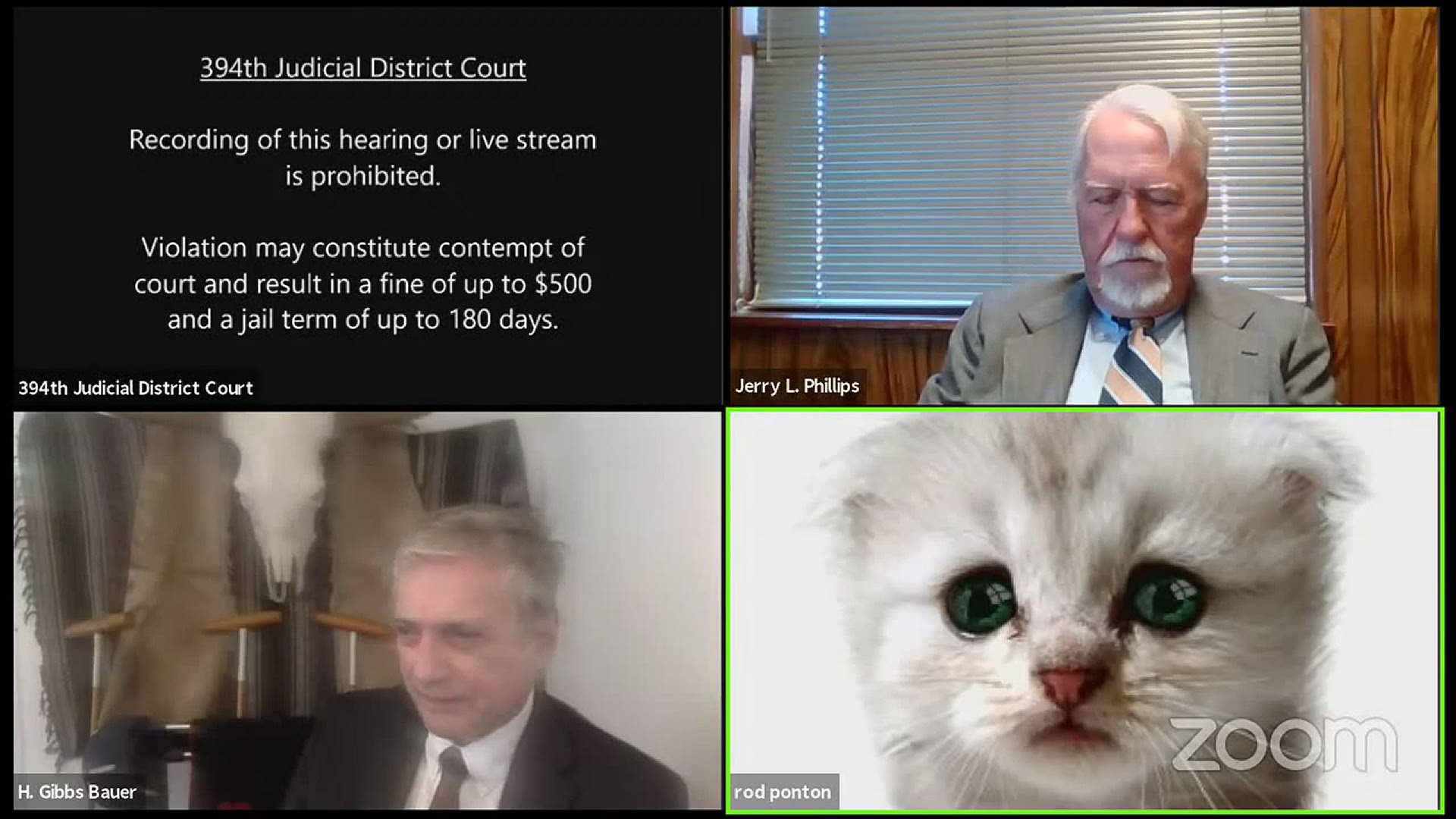 ZOOM - Texas attorney Rod Ponton is not a cat, but he felt the need to clarify the matter during a virtual Zoom court appearance in Judge Roy Ferguson's 394th Judicial District of Texas Tuesday.

Ponton's screen showed a video filter of a cat where his face should have been. The video has been making the rounds Tuesday after Ferguson shared it in a tweet. Ferguson's court serves Brewster, Culberson, Hudspeth, Jeff Davis and Presidio counties.

"Mr. Ponton, I believe you have a filter turned on in the video settings," Ferguson can be heard saying at the beginning of the short video.

"I don't know how to remove it, I've got my assistant here, she's trying to [remove it]...," Ponton says, his apparent anxiety accentuated by the cat's downward-shifting eyes.

"Uh, I'm prepared to go forward with it. I'm here live, I'm not a cat," Ponton says next, deadpan.

Watch the full video in the player at the top of this story or at the link below:

The YouTube video of the Zoom mishap has been viewed more than 660,000 times so far. And honestly, who among us hasn't had a Zoom issue during the last year?

Ferguson wrote in a series of tweets about the video Tuesday that people should check to make sure your Zoom filters are turned off and that "these fun moments are a by-product of the legal profession's dedication to ensuring that the justice system continues to function in these tough times. Everyone involved handled it with dignity, and the filtered lawyer showed incredible grace. True professionalism all around!"

IMPORTANT ZOOM TIP: If a child used your computer, before you join a virtual hearing check the Zoom Video Options to be sure filters are off. This kitten just made a formal announcement on a case in the 394th (sound on). #lawtwitter #OhNo @zoom_ushttps://t.co/I0zaj0wu6K

Ferguson also said he wanted to highlight the professionalism of all of the lawyers involved during today's hearing and during the entire pandemic:

“It is crucial to me that this not be couched as poking fun at or mocking the lawyer, but noting that it goes hand-in-hand with the legal community's effort to continue representing their clients during these difficult times, and at the incredible professionalism and dignity displayed by all involved.”

Ponton's record as an attorney includes some pretty famous cases. He was featured in the 2019 Netflix documentary series "The Confession Killer," about Henry Lee Lucas, who confessed to more than 600 unsolved murders in the '80s.

Ponton represented Lucas in one 1986 capital murder prosecution in El Paso. He was able to successfully argue that Lucas couldn't have killed that many people because of strong alibis explaining where he was at the time of the murders. Ponton also discovered that the Texas Rangers were trying to pin old cases onto Lucas by giving him minute crime scene details before he "confessed."

Since then, the Texas Rangers stopped relying solely on confessions to convict people for crimes.