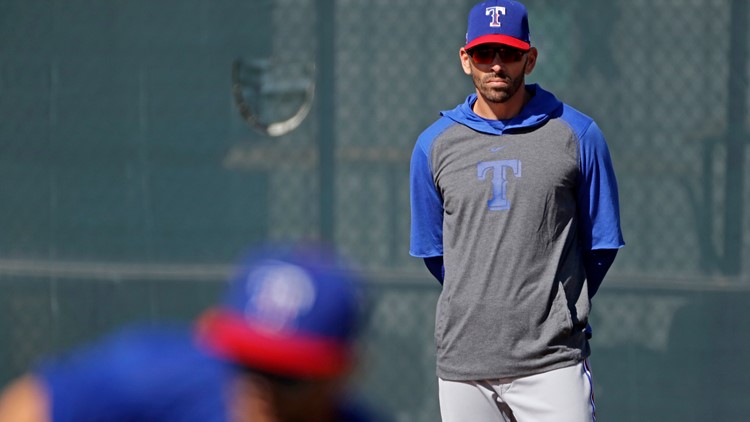 Baseball season is finally upon us as pitchers and catchers have reported to Surprise, Arizona for Spring Training. The rest of the team is set to join on February 16 with their first workouts set for the 17th.

Before you know it, it’ll be time for the first action of the spring with the Rangers set to take on the Kansas City Royals on the 21st.

The Rangers are hoping to build upon a season where they outperformed expectations but still fell short of reaching the postseason for a third consecutive year. And indeed, for the 2020 Major League Baseball season, there are still plenty of questions that the Rangers will look to begin answering in Surprise.

Who owns the ninth inning?

The Rangers have RHP Jose Leclerc returning this year to the closer role but, as we saw last year, he struggled in that job coming out of the gate in 2019. For that reason, the team brought in veteran closer RHP Cody Allen and they still have RHP Rafael Montero in the mix.

Montero seemed to figure it out last year as a spring training non-roster invitee by Texas after four sub-par years with the New York Mets. Much like in the second half of last season, he likely fills the role of setup man to bridge the Rangers to their closer late in games.

An Allen versus Leclerc battle in Arizona could be something to watch out for as they try to stake their claim to the closing duties in 2020. Leclerc has the stuff and showed the ability during the 2018 season and the latter part of 2019. Even though he has only converted 28 career saves in four seasons, after signing him to a contract extension prior to the 2019 season, the team is confident in what Leclerc brings to the table.

Allen is the dark horse in all of this as he has the experience as a legit closer in the majors for some impressive Cleveland teams. His 2018 and 2019 seasons were disasters, however, which was a bit of surprise considering what Allen accomplished on the mound for the Indians from 2014-2017. Texas is taking on Allen as a low risk option and hoping that they will be able to correct the issues that caused him to fall off the wagon and then reap high rewards.

Spring Training should enlighten the Rangers on how this will all shake out as they get close to Opening Day. Leclerc is likely the favorite to be the closer with Montero pitching in the late innings and Allen vying for a spot in the bullpen.

Who mans first base?

The team, as it stands now, is betting on Ronald Guzman figuring it out at the plate. Texas has no qualms with Guzman’s defense at first base, but the bat has been sorely lacking. The Rangers are hoping that another year of working in their system will get Guzman’s bat up to speed but there is no substantial plan behind him should he falter.

After a rookie season that gave the team confidence that he would only get better with time, Guzman’s sophomore year was more of a slump. So much so that he was sent back down to Triple-A Nashville to work on things before finishing out the year back in Arlington.

Guzman has shown that he can hit in the upper levels of the minors but that has yet to translate consistently in the big leagues. One glimmer of hope is that after returning to the team in September, Guzman raised his batting average by 25 points. The Rangers will need more than that out of Guzman, however, in a position that needs to be offense-forward.

Things remain cloudy on the depth chart behind Guzman. The Rangers have brought in Greg Bird to at least give their young first baseman someone to battle.

In 2015, with the New York Yankees, Bird had his best season to date with a .261/.343/.529 slash line in his rookie season as a 22-year-old. The arrow was pointing up. Since that season, Bird hasn’t played in more than 82 games in a single season. With debilitating injury after debilitating injury, he also hasn’t batted over the Mendoza line or sported an on-base percentage higher than .300.

If the Rangers aren’t happy with Guzman full-time – or if Bird isn’t able to claim the job – there’s the option to platoon Guzman with everyone from Danny Santana, when he isn’t roaming centerfield, Nick Solak, if he sticks on the roster, and even Todd Frazier can grab a first base mitt when he’s not playing third.

Will the pipe dream at third base come true?

A reason you won’t actually see Frazier at first base much is he was brought in to play third base in 2020. His signing was key for the Rangers due to whiffing on their top targets Anthony Rendon and Nolan Arenado. After coming up short in the Rendon sweepstakes, had Jon Daniels been able to pry Arenado away from Colorado, then Frazier would obviously platoon at both third and first for Texas.

Speaking of pipe dreams at third, there is Kris Bryant.

Bryant is likely going to start the season with the Chicago Cubs as they have no incentive to trade him at this point, beyond a desire to shed payroll. However, his bat is desperately needed in the Texas lineup this season. Outside of Joey Gallo, and hopefully another big season from Santana, the Rangers don’t have a big-time bat to help drive in runs.

After losing a service time manipulation hearing against the Cubs this winter, Bryant remains with Chicago and then will enter his fourth and final year of arbitration following the season before becoming a free agent at the conclusion of the 2021 season.

If the Cubs get an offer they like, then of course they could deal Bryant. But they can comfortably keep fielding offers until the trade deadline before feeling any real pressure to move the former MVP, All-Star third baseman.

The Rangers present an attractive trading partner with Chicago because it would keep Bryant out of the National League. Texas, of course, would love to pair Bryant with fellow Las Vegas native Gallo but the details might be just as difficult to come together on as any deal to land Arenado from Colorado.

With so many questions surrounding the Rangers on the field, Spring Training has come around at just the right time to help begin to answer them. For now, the perception is that the team made an error with how they approached the off-season after all those promises of being big players in the off-season. But, as they say, hope springs eternal.

Who do you think will be this year’s Danny Santana to open eyes in Spring Training? Share your thoughts with Patrick on Twitter @PatSportsGuy.